Talk of the Table | Waste with Taste: Peels, Stems, Tops and More

We are proud to announce that “Talk of the Table” was named Best Magazine Food Section in the 2022 Food Writing Awards by the International Association of Culinary Professionals.

Soon after Istanbul-born chef Sibel Pinto first came to Paris, she was surprised to see garbage cans full of leek greens in her local grocery market. “Half the leek was going into the trash,” she recounts. “It was a stroke of luck for me, because we use this part of the leek for a Sephardic Jewish specialty my grandmother used to make.” The vendor was happy to let Pinto take the leek greens off his hands. She returned the next day with a batch of keftes de prasa—classic Sephardic meatballs made with leek filler. “He gathered all the people in the market and said, ‘Oh madam, c’est incroyable!’”

For most of human history, food has been a precious resource, and avoiding its waste was an imperative. Yet in today’s era of industrial food production, refrigeration and mass consumption, food waste is a far greater issue. According to the World Food Programme, an NGO affiliated with the United Nations, one-third of all food produced for human consumption is wasted—that’s 1.3 billion tons, enough to feed every undernourished person in the world twice over. “In rich countries we are producing three to five times the amount of food that our populations need,” says Pinto.

“Moreover, there are all these cosmetic standards—if a tomato does not have the ‘right red color’ or a green bean is not seven centimeters even in the harvest stage, it’s thrown away. It is really a scandal.”

In 2016, Pinto started Action Kashkarikas, a nonprofit to advocate against food waste and raise money for children’s hunger relief programs. She has since collaborated with the Leket food bank in Israel, the Jewish Bet Debora Association in Berlin, the American Sephardi Federation, and many other groups. She named her organization after kashkarikas, a sweet and sour meze her grandmother made from zucchini peels with olive oil, fresh lemon juice, dill and sugar. She calls this dish the “emblem” of Sephardic cuisine and now hopes to make it an emblem of zero-waste cooking. A third printing of Kashkarikas Wasteless Kitchen—her 2021 cookbook, with 222 “waste free” recipes—is scheduled for 2023.

Pinto isn’t the only Jewish chef trying to move gourmet cooking in this direction. Chef Joel Gamoran created his TV show Scraps: Parts Uneaten in order to educate viewers about the “monster problem” of food waste at home. “I had been teaching home cooks for seven and a half years,” Gamoran told the Culinary Institute of America, of which he is a graduate, in an interview. “In one class, I noticed everyone’s garbage bowl filled to the brim with usable ingredients. I would totally get yelled at for throwing this stuff out in restaurants. Yet here we are at home doing it. It felt like a huge disconnect and a message I really wanted to bring forward.” The premier episode of his TV show features Gamoran cooking with shrimp shells, broccoli stems and pickle brine. In another, Gamoran teams up with Israeli celebrity chef Einat Admony to make an Israeli-inspired dinner out of cocoa husks, cauliflower and herb stems. His cookbook, Cooking Scrappy, includes inventive meals such as basil stem panna cotta and radiatore pasta with carrot-top pesto.

Until the show aired, Gamoran didn’t realize that this message had a biblical precedent. His grandfather, a retired rabbi, sent him a biblical passage in which God commands ancient Israelites not to destroy fruit trees in the course of their war-making. In time, the verse was interpreted as Bal Tashchit, a prohibition against wasting any food that can be eaten at a later date. At the supply level, the biblical practice of gleaning—letting poor people pick over the field after the workers—also reduced food waste by opening commercially unviable harvests up to the impoverished. The Sefer HaChinuch, a 13th-century rabbinic text from Spain, goes further: Its authors state that the pious “will not waste even a mustard seed in the world, and they are distressed by any waste and destruction they see.”

Recipes designed to minimize waste have been part of Jewish culture for generations. Jewish food historian Kat Romanow adds that “many dishes in Jewish cuisine were bred out of scarcity, not religion.” Aside from Sephardic specialties such as kashkarikas and keftas de prasa, many Ashkenazi comfort foods like cholent, gefilte fish, babka and kugel were designed to stretch ingredients and were once considered “poverty cuisine.” “Most Jewish food was poor man’s food, all over the diaspora,” adds DC-based Israeli chef Vered Guttman. “To avoid food waste, every part of the animal was used (consistent with kosher laws) and Jews were sometimes only using the innards and less desirable parts of the animal. So many dishes demonstrate this, from the Ashkenazi kishka [made from intestines] and chicken gizzards stew (pupiklech), to stuffed spleen in North African cuisine.”

Growing up, I watched my own grandmother use every scrap of food. Hers was a kitchen where today’s meal dictated tomorrow’s menu and food waste was off the table. Whether it was saving the golden schmaltz (chicken fat) after cooking a chicken, or frying leftover mashed potatoes into golden potato pancakes, no morsel went to waste.

Modern tips to help reduce waste include cleaning and organizing your refrigerator weekly, and creating “eat me first” sections, where soon-to-spoil items can draw your attention instead of moldering sadly in the back of the shelf. Becky O’Brien, director of food and climate at Hazon, an organization that strives to promote sustainability within Jewish communities, says to read between the lines of the “best before” stamp: This date is simply the date that a manufacturer will guarantee that item for maximum freshness, not that the food will spoil. “Trust your senses,” O’Brien urges.

I have an “open fridge” policy with my friends and neighbors, so that we can exchange food items and ingredients to reduce waste, and many cities extend this to the neighborhood level through community fridge programs, where grocery stores and private citizens alike can distribute unused food to the needy. Freezing food is another simple step—even veggie scraps can be saved for a minestrone soup on a winter’s day. “Start researching what you can do with a banana peel!” says Gamoran. “You will start to open up the possibilities, and everything in the kitchen will follow.”

More delicious Jewish recipes abound, from toasty calzone-like shamburaks, which Jerusalem’s Syrian Kurdish community made from their Shabbat leftovers, to Yemenite “slow cooked cow foot stew,” marak regel. But creativity and reverence is the bottom line, says Pinto. “It’s not so important to learn the recipe, it’s important to respect the ingredients. In that ingredient there’s so much—there’s energy, there’s water, there’s the human force inside—so don’t just throw it away.” 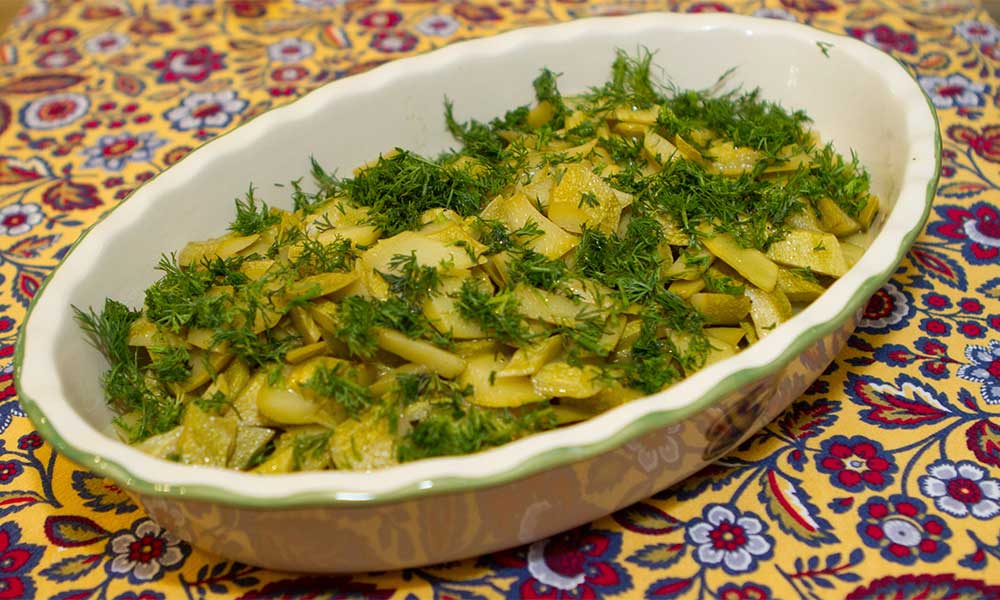 A classic Sephardic dish that transforms zucchini peels into a delicious sweet-sour meze.

1. Peel the zucchini lengthwise in strips, leaving some of the flesh still on the peel. ​

2. Cut the peels crosswise into one-inch slices and set aside the flesh for another recipe. ​

4. Bring to a boil, then reduce the heat to medium and cook for 5 minutes.

5. Add the zucchini peels and simmer for about 10-15 minutes or until cooked al dente.

6. The liquid should reduce to a syrupy consistency. ​ Sprinkle with dill and lemon zest (it gives a delicious kick to the dish) and let it cool in the pan, covered.

7. Add a tablespoon of olive oil, mix well and serve at room temperature, or refrigerate vegetables overnight. Take out 30 minutes before serving.

More zero-waste recipes can be found at kashkarikas.com and IG @chef_sibelpinto