Let’s face it, Canada and the United States are not in conflict over the origins of the donut and which national brand is superior, Dunkin’ or Horton’s. But a reference to falafel as Israel’s national dish would bring condemnation in the Arab world, and the assertion that Israel stole falafel from Palestinian neighbors would certainly yield equal contempt.

At first, it seems hard to believe that a walnut-sized amalgam of crushed chickpeas, spices and herbs could generate that level of controversy. And honestly, after a few bites of crunchy goodness in a pita pocket with pickled vegetables and spicy sauce, who really cares? But the sad reality is that the Israeli-Arab conflict has stirred up finger-pointing on all fronts, including culinary ones. And in an era where cultural appropriation is an apostasy, the innocent little falafel has been swept up in the vortex.

Fair-minded Israelis and Jewish Americans readily acknowledge that Israelis did not invent falafel on their own. Nevertheless, the question of origins “misses the point,” says Ran Nussbacher, CEO of Shouk (Hebrew for “market”), a four-restaurant group (soon to be five) in the Washington, DC, area serving all plant-based “Tel Aviv street food,’’ including falafel.

“I’m disappointed when we don’t use food as a bridge,” Nussbacher says. “Is pizza an appropriation of Italian culture? Is pasta Italian or Chinese? Food is not owned. Food is dynamic. And it’s created and recreated time and again. The question of ownership is irrelevant.”

Even so, many on the Palestinian-Arab side see the claims as symptomatic of what they view as the arrogance of the Jewish state. Aziz Shihab, a now-deceased Palestinian-American journalist and cookbook author, recalled in The New York Times how he once railed against an Israeli restauranteur in Dallas who served falafel. “This is my mother’s food,” he declared. “This is my grandfather’s food. What do you mean you’re serving it as your food?”

This back-and-forth swirled in my mind as I set forth to make falafel from scratch for the first time. The ingredients and techniques in multiple recipes were easy enough to procure and follow: chickpeas, garlic, parsley and spices mixed up in a food processor, with a little water added to help falafel-ball formation.

Previously, I had considered falafel to be a necessary backdrop for the main event: the toppings bar with its dazzling array of multicolored cabbages, tomatoes, onions, cucumbers, Israeli-style pickles, green and gold sauces…you name it. But once I pulled my first few crispy falafel balls out of the hot oil and bit into the crunch, I finally understood what all the fuss was about. Delectable, warm, the outer crust giving way to soft, flavorful manna—it was truly the star of the show, not a bit player. 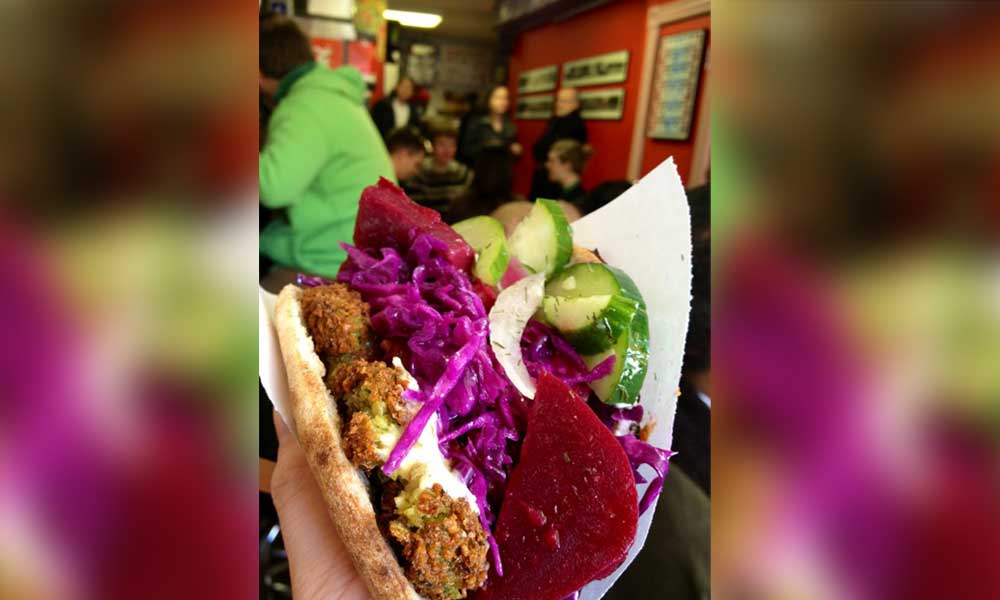 Falafel’s origins are, in fact, open to debate. According to the late Gil Marks in his Encyclopedia of Jewish Food, the primary theory is that medieval Egyptians turned fava beans into greenish fritters. Chickpeas replaced fava beans in Yemen and the Levant. The term “falafel,” according to Marks, is the Arabic plural for pepper, and in its adjectival form (filfil) denotes something fluffy.

Israel’s best claim to the dish may be the Yemenite Jews who came to Israel in its early days with the bold idea of putting falafel together with pita as a sandwich. In any case, falafel grabbed hold of the collective consciousness of the region and traveled with immigrants to Europe and, eventually, to the United States. Its status grew as diners gravitated to sources of healthy sustainable protein.

Falafel’s diaspora inadvertently may have helped ease the tension over bragging rights. Arianne Bennett joined her late husband, Scott, in loving falafel on a trip to Amsterdam in the late 1990s. Whether it was Israeli or Arab was immaterial. The out-of-the-deep-fry freshness impressed them so much that they decided to open a falafel place of their own in Washington, DC. The name? Amsterdam Falafelshop, which remains the region’s premier falafel purveyor.

“The word ‘Amsterdam’ took the bias out of it for every culture,” Arianne says. (She even added a few Dutch twists like garlic cream sauce.) Neither Arianne nor Scott, who died from COVID earlier this year, had Middle Eastern roots. They relied on freshness and excellent preparation to help them overcome the inevitable question, “What do you know about falafel?”

“And we would always say, ‘We hope you will come back and get another one, because it’s that damn good!’” No one disputed the claim after eating one. And, yes, Arianne says, many came back for a second serving.

With even Trader Joe’s offering a falafel mix to make at home, it may only be a matter of time before falafel jumps the ethnic divide and joins a select few other foods with universal appeal. On the current trajectory of the fried chickpea ball, doyenne of Jewish food Joan Nathan predicts: “It will become similar to pizza and bagels.” 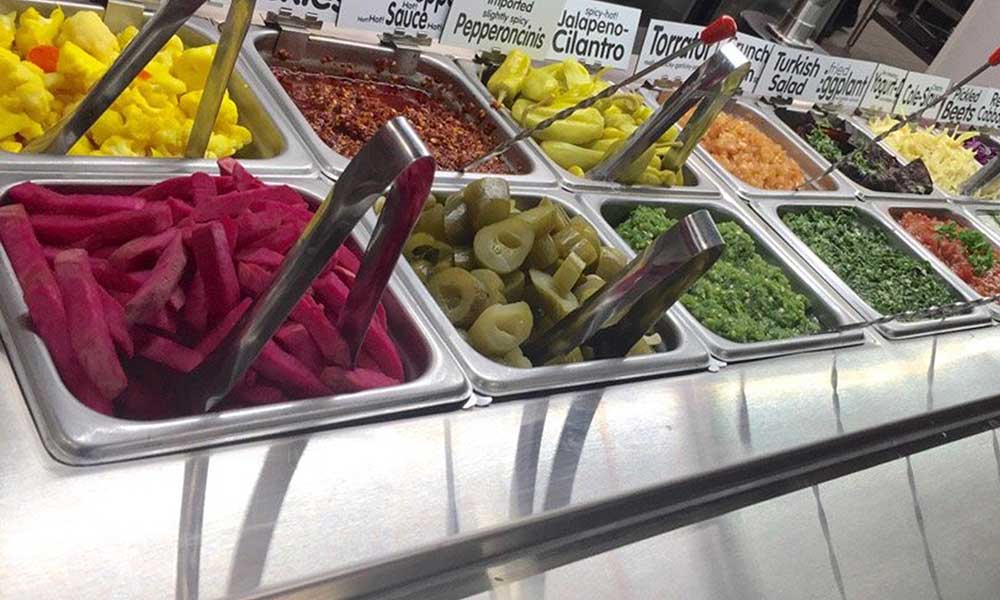 Cookbook author Joan Nathan included this recipe in her 1998 book Jewish Cooking in America. It comes from Moshe Mizrachi, a Syrian Israeli who emigrated to the U.S. in 1980 and operates a falafel stand in midtown Manhattan.

dash of coriander seed
soybean or vegetable oil for frying

1. Cover the chickpeas with water and let soak overnight. Drain.

2. Cover the bulgur with water in a mixing bowl and let sit for half an hour or until moist.

3. Meanwhile, mix the drained chickpeas and the onion. Add the parsley, egg and spices. Whirl in a blender or food processor until blended but not smooth.

4. Add enough of the bulgur to the chickpea mixture until the dough forms a small ball and no longer sticks to your hands. Refrigerate for at least one hour.

5. Form the chickpea mixture into balls the size of walnuts, or use a falafel measuring gadget available in Middle Eastern markets.

6. Flatten the balls slightly. Heat three inches of soybean oil in a deep pot to 375 degrees and fry about half a dozen at once until golden brown on each side. Drain the falafel on paper towels. Stuff the pocket of a half pita and fill with condiments of your choice. Check recipes for chopped salad, hummus, tahini sauce, eggplant salad, tabbouleh and zhug (a Yemenite hot sauce).