Welcome to “A Momentary Kitchen”—a moment of something (Jewish and foody) to do with your loved ones in these uncertain times. Come in, grab a stool and some tea, kibitz and cook. Each recipe has been chosen for children 10 and over (under 10, please cook with a grownup!) and each will offer variations for dietary needs and palette. Every recipe will take less than 30 minutes to prepare and less than three hours to cook.

Chicken soup needs no introduction. When I was a girl in Hebrew School,  we were instructed to imagine what manna tasted like to the early Israelites. I fantasized about green pepper pizza and chicken soup with my Aunt Mildred’s matzoh balls. Thirty years later, Aunt Mildred confessed that she got her matzah-ball recipe from the side of a box, but her soup was still done old style—bird in a pot, some basic vegetables and dried herbs, bouillon and salt with a zap of shmaltz for flavor.

It’s the proverbial cure. So why not try more than one version. We start with Aunt Mildred’s age-old soup recipe, then shift gears to something Asian-inspired but friendly to Jewish palates. Both will be ready for dinner in an hour plus change. Serve a hungry family, or freeze the golden goodness in pints to nourish someone later. Think of my Aunt Mildred, won’t you? And think of those you will have inspired with steaming spoonfuls of brothy nurture, our real manna.

The secret to this soup is to use well-washed unpeeled vegetables and then let them mull in a stew pot or pressure cooker.  The ingredients listed below are in order. In a frying pan, sauté garlic, onion, mushrooms, carrots, celery and parsnips to a low sizzle in oil (not to crisp their edges, but to soften them to sweetness), sprinkle in celery salt, and set aside. Pop your chicken into a stew pot, then cover with water. Let this simmer for at least 20 minutes, then lift chicken parts out with a slotted spoon. Add in bouillon, sautéed vegetables and parsley. Let finish for another 20 minutes, while you shred chicken and return it to the pot, discarding bones. Really old style? Keep in bones, gizzards, neck, pupik, everything. Mid-century minimalism? Strain the soup broth and add back into the broth your shredded chicken, carrot coins and a bit of celery. The key to our survival in challenging times has always been adaptation and the comfort this elixir brings. Salt and pepper to taste.

Two big splashes of sunflower or olive oil, at least a half cup

Twelve cloves of garlic, two chopped finely, the others whole

Four big mushrooms, cut in half

One raw, hollowed small chicken or chicken thighs with skin (cut off the wings and  legs, to use elsewhere) Include the skin for the shmaltz

Three quarts of water, enough to cover the chicken

Salt and pepper to taste

White or brown rice or quinoa, cooked separately, added in before serving 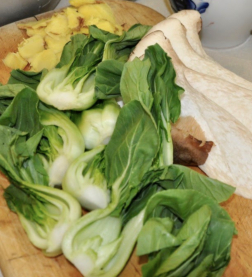 This soup parboils (partially cooks by boiling) a limited number of ingredients (the fewer, the better) in broth, done in a hot pot or deep gallon boiler. I ran out of carrots at the time of this cooking, so I added in more parsnips. When water is slow-boiling, add in bouillon. In a frying pan, bring oil to high and pan-grill the bok choy and mushrooms. Slice cooked chicken breast cleanly as you can. From here you are in hot-pot mode: into the bubbling broth, gently place each remaining ingredient until parboiled, still brightly colored but cooked. Add soy sauce to taste. Layer your soup in a way pleasing to the eye, saving delicate items like poached eggs and thread noodles until last.  Beautiful and yet so simple, healthy and modest.

One splash of sunflower or sesame oil, at least a half cup

One clove of garlic, chopped finely

One carrot, julienned or cubed

Two quarts of water, enough to cover the chicken

Coarsely chopped parsley and/or chives, or any Japanese seaweed blend 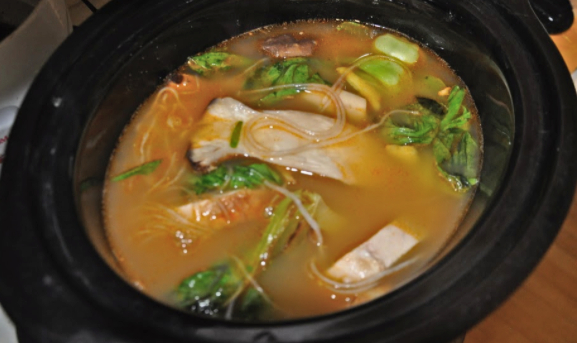 Variations (Good for both recipes)

Matzah balls from scratch or not, both recipes on the box (Passover is coming).

Love a vegetable, by all means. Radish. Poblano. My go-to: a cubed sweet potato.

Keep adding things to the soup the next day.

Forget the chicken altogether and use tofu and high-gluten seitan.