My father, Jack, escaped Nazi Germany in 1939, making a dangerous journey from Frankfurt via Belgium to New York. He met my mother, who had escaped Vienna, and they settled in Washington Heights in northern Manhattan. Washington Heights was sometimes called Frankfurt on the Hudson because it was full of immigrants who had brought their German Jewish culture to the neighborhood with kosher butcher stores, bakeries and delis on every corner. German was spoken as well as English and we were surrounded by friends and family from the old country.

Alfred, who had been my father’s best friend in Frankfurt, had come to New York a few years earlier and lived only a block away from us. We would often see him and his family. My father was a tailor and fitter at Ripley’s, a menswear store. Alfred was a butcher and baker who worked for the City of New York. 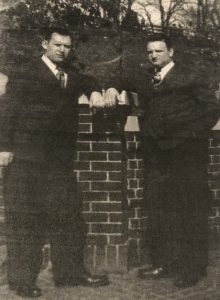 Always after dinner, my father and Alfred went for walks, strolling down Broadway with their hands behind their backs, enjoying cigarettes—Marlboros for Jack, DuMauriers for Alfred—and conversation.

I was a few years older than Alfred’s daughter Elaine, but we were good friends as children. As time went by, our fathers sadly both passed away. Elaine and I left New York; I moved to Massachusetts, she moved to New Jersey. Our only contact was an annual call to reminisce about the Passover seders we shared as kids, but we hadn’t seen each other in over 20 years. 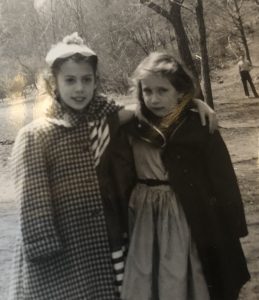 During one of these phone conversations, Elaine told me that her daughter, Joy, was a sophomore at Syracuse University. Coincidentally, we were soon driving up to Syracuse with our son, Michael, for his freshman orientation. The school had more than 15,000 students, so I knew that the odds of running into Joy were small.

Michael was assigned to a large dormitory, room 409. As we walked down the fourth-floor corridor of Haven Hall, I noticed that each numbered room had a name sticker on it: 406 Jamie, 407 Alex, 408 Joy, 409 Michael.  “This can’t be,” I thought, “Joy is a popular name.” But looking more closely, I saw that last names were written below, in smaller print, and I was dumbfounded. My friend’s daughter was living next door to our son.

I called Elaine to tell her that our kids were now neighbors and would perhaps become friends themselves. (They did!) But most of all we shared the joy of knowing that Jack and Alfred, best friends and Holocaust survivors, linked in Frankfurt and New York for over 45 years, were now re-united through their grandchildren two generations later. It was truly beshert.

I can just imagine Jack and Alfred strolling down Broadway, sharing a laugh, and enjoying their grandchildren’s story.

Barbara Krupat lives in Newton, MA and has been married to her husband, Ed, for 53 years. She is a retired speech and language therapist and enjoys writing on the side. She has published in the Jewish Advocate and Mass Pocha, the newsletter of the Jewish Genealogical Society of Greater Boston. She and Ed have two sons and four grandchildren. They are members of Temple Emanuel in Newton.

END_OF_DOCUMENT_TOKEN_TO_BE_REPLACED

One thought on “Beshert | Staying Connected: A Story in Three Generations”