It was a time of innocence for first-generation American teenagers like my mother, Eleanor Wolin. The wars in Europe seemed far away. At home in the Bronx, she and her older sister Bernice would overhear the whispered names of relatives they never knew. In America, my mother and aunt felt safe and secure, their dreams filled with fun and adventure, their hearts filled with hope for love, marriage, and families of their own someday.

In the summer of 1946, my then-sixteen-year-old mother and eighteen-year-old Aunt Bernice found themselves with nothing to do. With school out, my mother missed her painting classes at Manhattan’s High School of Music and Art. My grandparents, working all day in their retail grocery, were too busy for fun. So, they decided to rent a bedroom for their daughters from their friend Mrs. Berg in the seashore enclave of Brighton Beach, Brooklyn for the season.

It wasn’t the ocean that lured them; neither girl knew how to swim. In the afternoons, just a stroll across the trolley tracks, were the boys. Squinting at the sun-soaked sand on the beach, my mother and aunt scanned the groups of bare-chested, hairy-legged, bronzed specimens of teenaged masculinity.

A particular crowd of fellas caught my mother’s eye.  They were displaying their athleticism by posing as human pyramids. My mother, a black-haired beauty with an alluring smile, demure in her two-piece halter-top skirted bathing suit, stood nearby. 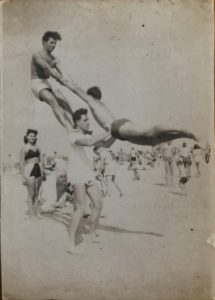 Erwin at Brighton Beach in 1946

The tallest, best-looking guy, who had wavy reddish hair, tossed a ball and sprinted towards her to retrieve it.

The next day, she sat on a bench in view of the boys, who were busy flexing their muscles. Erwin approached and sat next to her. She coyly inched away. Cautiously, he moved closer. The dance continued until she fell off the end of the bench onto the sand.  He helped her to her feet.

“Daddy picked you up on the beach,” I used to tease my mom, but it was hardly improper. Their courtship dance lasted four years. They married in 1950. By then, my dad had earned his electrical engineering degree from New York’s City College. My mother graduated from the Fashion Institute of Technology and began her fine arts career. All the while, Dad spent incalculable hours on the subway between Brooklyn and the Bronx.

Their personalities were like opposite poles of a magnet and the attraction was irresistible. My mother was artistic and expressive. My father was hardly a flowery romantic. In his old letters to my mother, he conveyed his practical, down-to-earth nature. He wrote about their activities and plans for future dates. Sentiment was clearly not in his vocabulary of love.

Instead, my dad was the one who was always at the bottom of the pyramid—the strong, stable foundation on which others could rely. The guy who lay steady on his back propping up a friend’s flashy handstand. The good-natured husband who picked up my mother whenever she faltered. Who raised her spirits through cancer and supported her valiantly to the very end.

My parents, Eleanor and Erwin Honig, were my models of a lifelong romance. A beshert love that remained grounded on the kind of stability my father showed that summer in Brighton Beach—when my mom, literally, fell in love with him. 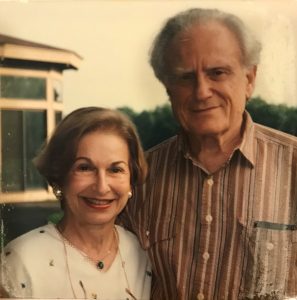 Cantor Sharon Citrin Goldstein has expressed her creative passions through multiple careers as an art educator, gallery curator, business entrepreneur, and Jewish music vocalist. Since her retirement as Cantor from Beth El Synagogue in Woodbury, Connecticut and educational coordinator for the Connecticut Anti-Defamation League, she’s devoted herself to writing family memoirs. She has two sons. Her other passions include ballroom dancing, organic cuisine, and daily long walks with her husband Paul by their homes in Fairfield, CT and Delray Beach, FL. Sharon says Paul has her dad’s dependability and her mom’s artistry. (He surprises her with fresh flowers every week!)

Top Photo: Erwin and Eleanor at their wedding in 1950.