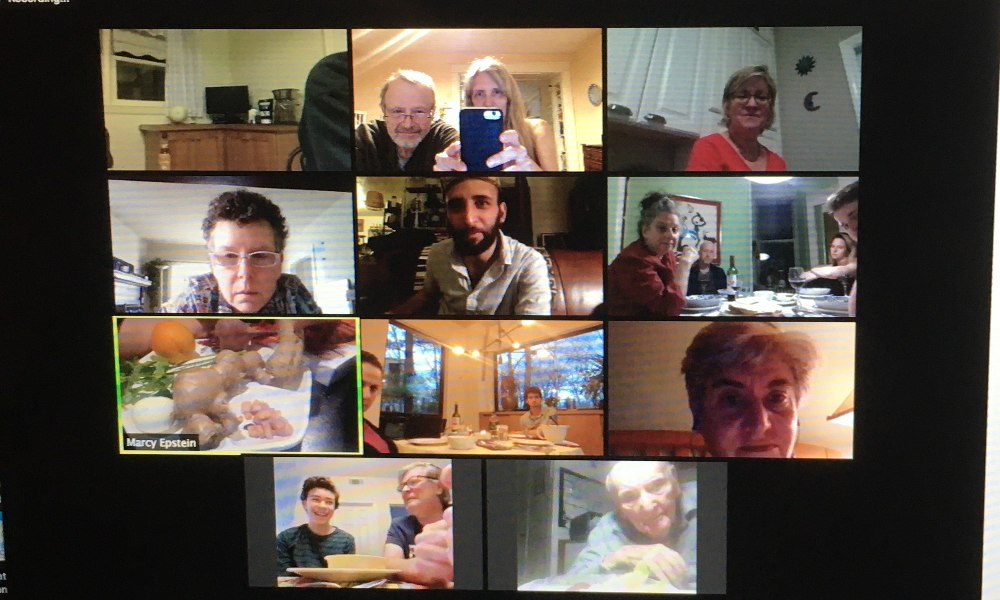 My sister was cooking up a batch of our late mother’s recipe for tzimmes Wednesday morning when the pot exploded. She called me from a friend’s phone at 11:18 a.m. “My house is on fire but I’m okay, and the dogs too,” she said calmly, explaining that smoke was pouring out of the house as firemen worked to put out the fire. Sheltering in place 525 miles away in Washington, DC, there wasn’t much I could do but keep calling. Later, as she sat in wicker chair on the sidewalk, surrounded by neighbors standing six feet away from each other, she explained that the kitchen was completely destroyed and the rest of the house damaged by water and smoke. She was thrilled that the firemen had retrieved her purse, phone and laptop before the house had been boarded up. She couldn’t stay on long because she was busy with the insurance company and contractors. I didn’t ask if she would still be leading our virtual seder that evening as planned. I never doubted she would.

At the appointed seder time, she appeared on Zoom from the apartment she had already miraculously managed to secure. There was no tzimmes or any of the other dishes she, a fabulous cook, had prepared for the holiday, but her table was overflowing with Passover delicacies that friends had dropped off—and somehow she had managed to fit in a stop in at Whole Foods for gefilte fish. She was still in her smoky clothes and slippers.

She then proceeded to conduct an amazing coast-to-coast seder. Around 25 people attended, a few popping in briefly from other seders. Some were family and dear friends, others I was meeting for the first time. We ranged from atheists to non-denominational to modern Orthodox, were culturally and racially diverse, and included people from different faiths. Our 99-year-old dad recited the prayer over the candles and wine before a singular feast his caregiver had laid out before him at his home on the Jersey shore. My youngest nephew, who had his bar mitzvah just before Covid-19 changed the world, chanted the four questions in his California dining room. An adorable grandniece and grandnephew, dressed in Passover costumes, made a surprise appearance to hunt for the afikomen in their living room in Jersey City.

We journeyed through the seder with the help of Moment’s 2020 Passover supplement, “The Seder is Already Virtual.” We sang a lot: “Dayenu” and “Chad Gadya,” but also my sister’s touching a capella solo of John Prine’s “Hello in There.” Other musical highlights were “Rumania, Rumania” sung in Yiddish and accompanied by the ukulele by my sister’s friend in Philadelphia, my son’s rousing rendition of “Go Down Moses,” Johnny Cash-style, in his Brooklyn apartment and my godson’s soulful performance of “Fire and Rain” on his guitar in Ann Arbor. There was also a lot of eating. Everyone presented their meals, which ranged from frozen Indian to full-fledged Passover feasts, as recommended by Moment’s Quarantine Cook, who happens to be my sister.

While we recalled the problems of the Jews in Egypt, we were released for a short time from the problems of 2020. Not that they were forgotten. The story of the fire was told again and again. Then there was Covid-19, the reason why we had all come together in this manner in the first place. That meant new prayers for washing hands, a smattering of politics and of course, the obligatory discussion of Zoom security.

It was a miracle that we could be together. My sister, who reserved the right to fall apart later, was delighted to be there for us. We were all grateful to be there for her and for one another. We were also conscious of the fact that, in a regular year, this particular group of family and friends would never have been able to all be together.

There were the expected calls for “Next year in Jerusalem,” and “Next year in person,” but I found myself asking, “Do you think we can do a Zoom seder again next year?” Not because we have to, but simply because it was wonderful. It brought me so much joy, and for the first time in months I slept well. Of course, maybe it wouldn’t be as meaningful under less dramatic circumstances. But then again, maybe it would.

I hope you too had meaningful seders.

Chag sameach to all of you, and stay safe, and be extra careful when cooking—now that we are all home, the number of kitchen fires has risen.