When my grandmother was 16, circa 1905, she journeyed alone from Smargon (in today’s Belarus) to Ellis Island. Like so many other Jewish women of her generation, she rose from the sweatshops of Lower Manhattan to marriage, motherhood and middle-class respectability.

But she never lost touch with her origins. The scent of chopped liver always greeted us as we walked through her door. The smell of dill wafted up from the basement, where pickles were brining. The pièces de résistance? Kneidlach (matzah balls) and, of course, gefilte fish. Like the rest of her immigrant generation, she made gefilte the way her mother made it…and her mother’s mother, and on and on.

Grandma died in 1969 when I was just 16. Without her wizardry, I developed a paradoxical connection to gefilte fish. I came to appreciate it as a delivery vehicle for my true love, horseradish. But as time went on, it became harder and harder to find really good gefilte fish.

Maybe that’s because, in the post-Grandma world, gefilte fish more often than not came out of a glass jar. Only now can I admit to myself: It was awful! This year, I decided enough was enough. In addition to the Passover hope of “Next year in Jerusalem,” I would add my own personal plea for deliverance: “No more jars! This year, homemade gefilte fish!”

I set about finding a source of inspiration, ultimately choosing The Gefilte Manifesto, by Jeffrey Yoskowitz and Liz Alpern. The book promises “New Recipes for Old World Jewish Foods.” It includes several recipes for gefilte fish, which, I learned, falls into three varieties: a baked loaf-like terrine, poached quenelles (small oblong balls) and “Old-World Stuffed Gefilte Fish.” “Gefilte” means “stuffed,” so “stuffed gefilte” means…stuffed stuff? No, the recipe calls for mixed gefilte layered inside a shell composed of fish skin and head. I decided to make the first two.

I called up Yoskowitz, and he encouraged my efforts with a true rabbinic touch. “Gefilte fish is one of the food traditions that connect Ashkenazi Jews of Eastern European origin to the past in a way that many others don’t,” he told me. “It’s a bridge between the Old World and the New.”

But there were obstacles. The first was obtaining the fish itself. Traditional gefilte is made from freshwater whitefish, pike, carp or a combination. I could not find any of these in the greater Washington, DC area. The terrine called for smoked whitefish and flounder fillets, both easily obtainable. But I lowballed the flounder, using a pound of fillets instead of the recipe’s one-and-a-half pounds. The recipe calls for coarse pulsing the fish in a food processor, and I overpulsed a bit to get the dill and baby spinach mixed in. The greens are a modern touch, Yoskowitz says. I guessed as much, since Grandma’s fish had no green flecks in it. I put the mix in two loaf pans and baked it at 375 degrees, as instructed. The result? I’d rate it a “so-so-plus.” Good, but nothing like Grandma’s. (However, it was delicious atop a bagel, like a drier version of whitefish salad.)

Next up were the quenelles. I approached the recipe with trepidation. On Yoskowitz’s recommendation, I subbed in tilapia. Later I found out that tilapia is native to the Sea of Galilee, which, looking back, was a promising start. One piece of advice in The Gefilte Manifesto that I took to heart: Use the bones, heads and fins of the fish to make a seafood broth. Basically, you dump the parts in boiling water and add carrots, onions and salt. Then I mixed up the fish in the food processor, much as I had done for the terrine. It rolled nicely into coarse egg-shaped balls, just as the recipe prescribed. The eight balls I gently inserted into the simmering broth fell to the bottom. But a minute or two later, they bubbled back up to the surface. They had maintained their egg-like shape while submerged. I remembered Grandma’s fish balls bobbing on the surface, so I knew I had hit pay dirt; this version of gefilte fish would be in the zone.

I made sure not to drown the quenelles in horseradish for the first taste, and finally dug in. They weren’t a carbon copy of what I remember, but they were moist, flavorful and fishy in a good way. They were the closest version I’d had to Grandma’s in decades.

I emerged from the experience not only with a keeper recipe, but also with a new appreciation for how shtetl food culture feeds our modern-day desire for sustainability. “The shtetl was one of the most environmentally sustainable places, foodwise,” Yoskowitz says. Impoverished Jews of the shtetl let nothing go to waste. I saw this in my quenelles preparation; instead of throwing the fish bones and heads in the trash, I used them to flavor the broth. And using tilapia made sense for similar reasons. Carp, pike and whitefish were preferred in Eastern Europe not because they were the best, but because of the abundance of freshwater fish in Eastern Europe.

There were also regional differences. Gefilte fish in southern Poland (Galicia, roughly) tended to be sweeter, a bit sugary. Gefilte of Lithuania and Latvia, however, was more peppery. And in Hungary: “Guess what?” Yoskowitz asks. “They used paprika!”

When Jews arrived in America, they congregated in urban areas and did their best to maintain the old ways. The 1972 children’s book The Carp in the Bathtub depicts a young Jewish sister and brother in Flatbush, Brooklyn, trying to save the live carp swimming in the family tub from the gefilte pot. The story is based on a real practice: Fish in a tub assured freshness pre-refrigeration.

But succeeding generations didn’t want to devote time to laborious recipes, and kosher food manufacturers filled in the tradition gap. Yoskowitz discovered this while researching his college thesis at Brown University on the industrialization of the kosher food industry. He says the idea behind The Gefilte Manifesto and its website, Gefilteria, is to “look to the past to inform us and help us find a sustainable way of living in the future.” Grandma as a sustainability pioneer? She would have exclaimed: “Hoo-Hah!” But I know somehow she would have been proud of my achievement. “Echt gefilte,” Grandma might have said—roughly, “the real deal.” 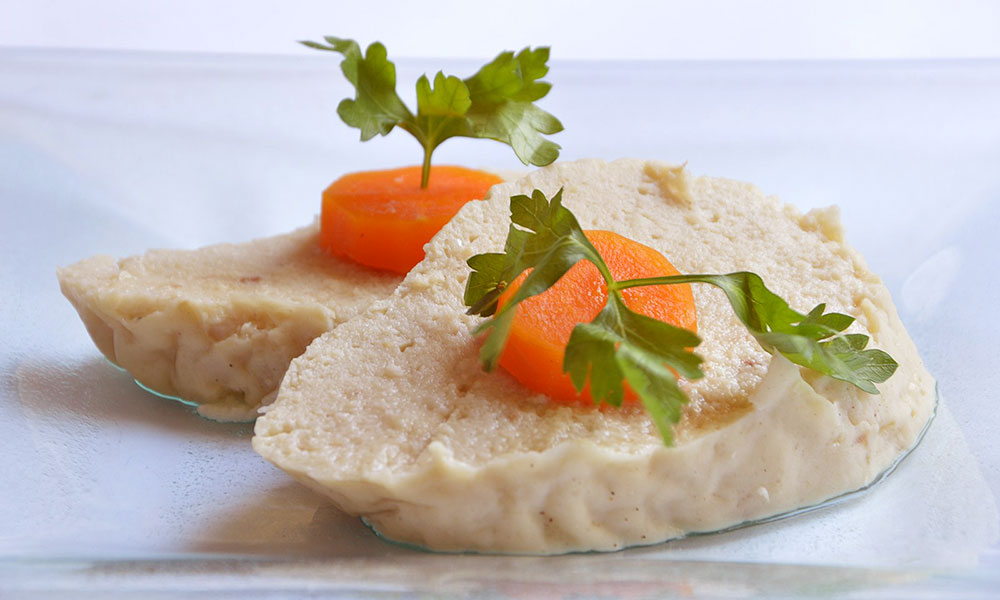 Heads, bones, tails from fish (Get fishmonger to give you bones, head, tails when preparing fillets from whole fish. Or do it yourself! All you need is a sharp knife.)

1. If there are any bones left in your fillets, remove by hand. Don’t worry about small bones; they’ll get ground up in the food processor. Make sure skin is removed.

4. Put fish mixture in bowl and give it an additional stir. Wet your hands and form about 10 quenelles, each the size of an egg, with the same oval shape.

5. Place the quenelles one by one into the stockpot. (Beforehand, I removed the fish heads and skeletons from the broth. But that’s optional.) Reduce heat to low and cover the pot. Poach for 30 minutes. Remove quenelles with a slotted spoon and place them in a bowl or deep serving dish. Spoon in enough poaching liquid to cover the quenelles and cool slightly before refrigerating.

6. To serve, remove the carrots and cut them into 3/4-inch rounds. Serve the quenelles chilled with carrot pieces and your favorite horseradish or horseradish relish.

END_OF_DOCUMENT_TOKEN_TO_BE_REPLACED

One thought on “Talk of the Table | Adventures with Gefilte Fish”