A week after we met in the weight room of the Mid-Westchester JCC, we went for a compatibility walk. Steve, the widower of just a few months, with his big old black dog, and me, the widow of almost one year, with my young small white dog. We walked silently on opposite sides of a local tree-lined path, the setting winter sun flickering between the leafless branches. Our furry children glanced furtively at each other at first, but then wagged cheerfully as we guided them closer together.

We wanted to introduce Brooks, Steve’s Portuguese Water Dog, and Scheffie, my Maltese, to each other on neutral ground. We were really trying out how it felt to be with each other.

Though we’d met at the gym, we had friends in common. We are sure we were at some large parties together over the years, but never actually spoke. And Steve and his now late wife, Laura, had known my late husband, Allan, at a temple couples club years before he lost his first wife, Marilyn, all z”l.

I am not sure when Steve and I knew we were beshert. We were always comfortable together. As our courtship became more public, our friends all said, “Beshert!”  I was moved when a cantor came up to me at a Shabbat service. She knew that I’d been my husband’s caregiver for many years. She hugged me tight and said of our Jewish community, “We are all so happy that you and Steve are beshert!” Her understanding touched me deeply. 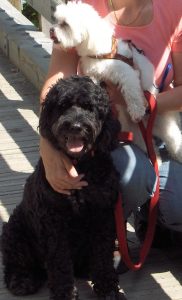 The dog brothers, Brooks and Scheffie, in 2007.

Brooks and Scheffie became dog-brothers. There was a little sibling rivalry. At TV time, both jockeyed to put their heads in my lap. Brooks’ head and Scheffie’s whole self were about equal size. Brooks tried his best to maneuver his gigantic head there while Scheffie pushed Brooks’ beard and snout away. None of this was particularly comfortable for me, but it was so hilarious to be part of, that Steve and I let them do it every night. Finally, I’d tell them both, “Go lie down.” (Brooks on my feet, Scheffie leaning next to me, no one in my lap.)

When Brooks died four years later, Scheffie looked for him for days. He moved his toys from bedroom to kitchen and back again. Finally, he spent his nights snuggling into Brooks’s blanket-covered bed cushion. We understood his grief.

To be a truly loving partner is to acknowledge and accept past loves and bring their memories into the present. Steve and I light Laura’s and Allan’s and Marilyn’s candles when we do blessings at family celebrations. We always mention them and include their memories in our gatherings.

Steve and I, now married for 13 years, love our family in all its iterations as we embrace each other, those we have loved in the past, and those we have not yet met. It is all beshert.

Fran Scheffler-Siegel and her husband, Steven J. Siegel, live in White Plains, New York. Fran is a speech-language pathologist and retired Hunter College professor. Her creative writing includes a short memoir, Worry Time (The Healing Muse, 2014) and stories on medium.com. A retired IT executive, Steve is a long-distance runner whose 558 road races include 30 marathons and 128 half marathons. Between them, they count six adult children and nine grandchildren.

5 thoughts on “Beshert | The Compatibility Walk”