A little girl is born into the assimilated Jewish bourgeoisie of enlightened fin de siècle Vienna in 1881. Her father is a well-established lawyer. An aunt has married a member of the illustrious Wittgenstein family. An uncle plays the violin in the Vienna Philharmonic. At home she is supervised by English and French governesses, and on family vacations she is taken to the Adriatic Sea. Despite the security and comfort of the time, fortune doesn’t shine on her. When she is 11 years old, her mother dies and she and her sister are left in the care of their grandmother. In her late teens, she falls in love with a married man known only in her private notes as “Esté.” Although their relationship will last more than two decades, she is well aware of the hazards and loneliness of leading a life as “the woman in the background,” and she searches for an alternative to the Victorian marriage that otherwise would have been expected. In the summer of 1904, while vacationing in Nice, she buys a simple box camera and imagines how it could provide her with a profession. She later refines that thought: “[With photography] I wanted to immerse myself in a world I believed looked like it could be mine.”

This is the first part of the story told in “Madame D’Ora,” a new exhibition on view through June 8 at New York City’s Neue Galerie. 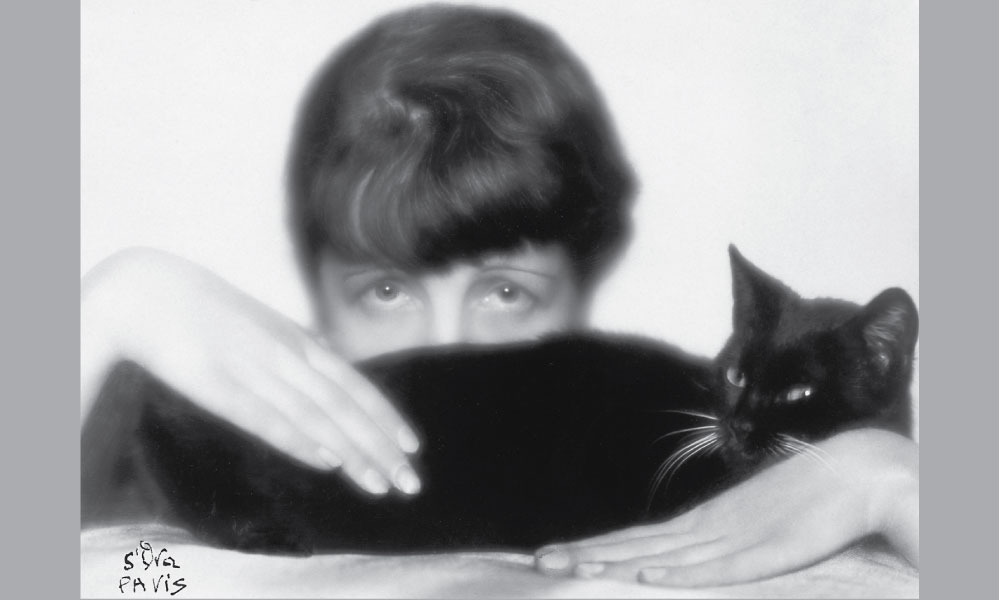 The show, which opens with a self-portrait of the subject of the exhibition, photographer Dora Kallmus, looking out with thoughtful eyes from behind the luxuriant body of a black cat, is accompanied by a sumptuous catalog edited by the curator, Monika Faber.

“Madame d’Ora” was the name Kallmus chose for her business and, from the beginning, she had no intention of being sequestered as an amateur. In Vienna, she went to work for the photographer Hans Makart Jr. to learn the trade from the inside. She took classes at the Graphische Lehr-und Versuchsanstalt, got a license as a commercial photographer, and joined the Photographic Society before enrolling in an internship with the eminent portrait photographer Nicola Perscheid in Berlin. When she returned home, she brought along Perscheid’s assistant Arthur Benda, who became the technical director of her studio, which would specialize in society portraits and the lucrative business of shooting photographs to be sold to fashionable illustrated magazines. Because of her extensive network of family and friends immersed in the world of Viennese art and commerce, Kallmus was able to draw on celebrities ranging from artist Gustav Klimt to the young family of Archduke Karl I; simultaneously, she had the support of Vienna’s fashion houses, where she was both a customer and a friend. 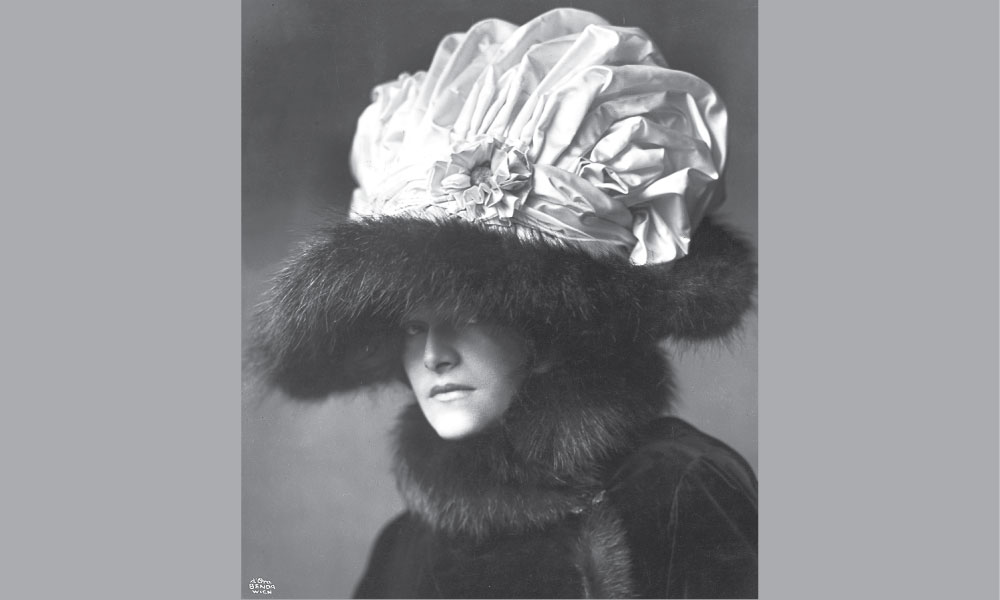 You can see how all of this came together in the evocative photograph of the actress Helene Jamrich wearing a billowing pouf of a hat fringed with fur (opposite). The fantastical headpiece was designed by the painter Rudolf Krieser and produced by the Zwieback luxury department store, which was owned by a prominent Jewish family in the Kallmus family’s social set.

Kallmus’s portraits stand out because of their psychological depth and the graceful way in which the photographer dealt with her subjects. One of her most artistic images shows actress Grete Jacobson dramatically extending her hands to the sides of a mirror and playfully pressing her face against the glass while showing off the back of a boldly patterned housedress she was modeling for the Wiener Werkstatte artisans workshop. Clients often spoke about the way Kallmus worked intuitively, putting them at ease so they could feel free to express themselves.

In 1919, in the wake of the anti-Semitism following World War I, Kallmus converted to Catholicism. In the early 1920s, after the death of her father and most probably because she was, as it was said in those days, “sitting on the volcano” of history about to erupt, she moved her studio to Paris, where her clients included the dancing Dolly sisters (also known as “The Million Dollar Dollies” because of their extravagant jewelry and penchant for gambling on horses), Josephine Baker and Maurice Chevalier, who would become a trusted friend. But even her celebrity connections and baptismal papers weren’t enough to protect her during the Occupation.

At the beginning of the war, Kallmus had to give up her Paris studio, and like the rest of the Jews living in France, in June of 1942, she was forced to wear the yellow star. In July, she miraculously avoided the Vel’ d’Hiv’ Roundup, and in August she and her Jewish assistant determined to escape to the unoccupied zone. Heading south by train, the two women were diverted, and when they were asked for their papers, her assistant was arrested and eventually sent on to the Gurs internment camp. Although Kallmus was released, she spent the rest of the war in constant fear of betrayal as she fled from town to town in Vichy France. In an encrypted diary she kept during that time, she contemplated the two completely different worlds she had lived in. Recalling a past that was so different from wartime and its terrors, she wrote: “I was only familiar with one of them, the one perfumed with luxury and flowered with orchids.” Depressed and isolated, she longed for her sister, who had remained in Austria. It was only after the war that she learned that her sister had perished after being deported to Łódz in 1941.

The most powerful of Kallmus’s later, post-war photographs bear the stamp of loss and misery, the conditions that marked the alternate world she had become acquainted with during the war. Between 1946 and 1948 she took a series of photographs in the Austrian DP camps, working in makeshift and squalid conditions very different from the elegance that had surrounded her in the past. The compositions are gritty, intentionally unbeautiful documents of the suffering of the war’s survivors. 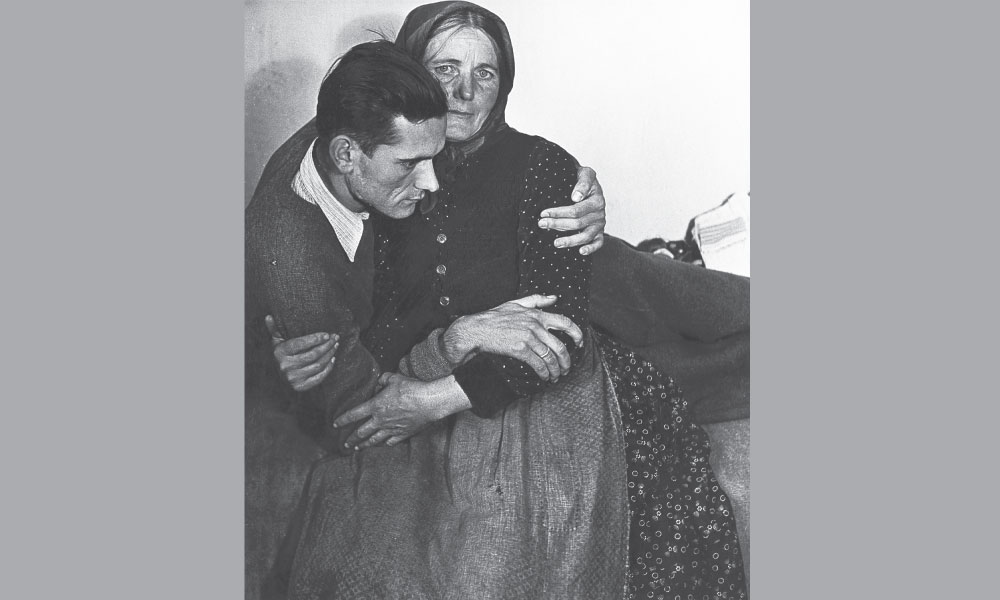 Returning to Paris, she began an eight-year-long project, taking hundreds of shots of the city’s bloody abattoirs, recording the horror of skinned and slaughtered animals. The butchery was a metaphor for what she had come to think of as the “stench” of human beings, and she regarded the grisly cruelties the animals suffered with empathy. In reduced circumstances, Kallmus continued to work as a studio photographer in Paris until 1958, when she was hit by a motorcycle. Badly injured and unable to continue working, she returned without enthusiasm to Austria, where she lived until her death in 1963 in the Aryanized, and then restituted, house she had bought with her sister before the war.

The scope of the exhibition takes viewers on a passage through history—moving from the ease of old Vienna, to Paris when it was the center of “beauty in exile,” and then to the antithesis of that elegance as the world pivoted under the pressures of fascism. The same brave intelligence and keen eye recorded it all—quite an accomplishment for the privileged young woman who first imagined that a camera could carry her into a world that would be her own.

Looking into the calm of artist Carl Moll’s 1905 White Interior feels something like inhabiting the imaginative space at the periphery of a dollhouse.