We live in a disjointed media market. Gone is the monocultural dominance and the sense of camaraderie you and your coworkers would feel as you gathered around the watercooler to discuss the latest twist on Lost. Instead, we binge whatever Netflix series our personal algorithm drops in our queue or turn to The Office for the umpteenth time. Jews too live in a disjointed market, albeit a religious one. Everyone knows the expression “two Jews, three opinions.” Whether it’s politics, God or Israel, we have never been able to come to a consensus on anything. Heck, we can’t even agree on how to spell the holiday Hanukkah.

However, when it comes to Passover, the Jewish people display a certain level of unity and community not seen throughout the rest of the year. On the day celebrating the creation of our peoplehood, Jews from all denominations gather together with extended family and friends to eat the same foods, read from the same texts and sing the same songs. While we may not all celebrate together, we celebrate together, with 70 percent of American and 93 percent of Israeli Jews gathering around large tables—virtual or physical—to retell the story of the Exodus from Egypt. In a way, it is the last unifying Jewish event; the last mono-Jewish ritual.

This theme of unity vs. division is hinted at early on in The Superhero Haggadah: A Story of Signs and Marvels. Assembled by Moshe Rosenberg, a rabbi and the author of The (Unofficial) Hogwarts Haggadah, The Superhero Haggadah takes the classic text of the Haggadah and adds commentary, imagery and songs inspired by the Marvel Cinematic Universe (MCU)—a collection of interconnected superhero franchises, including Iron Man, Black Panther and Thor—to tackle the issues and questions the Haggadah and Exodus raise. 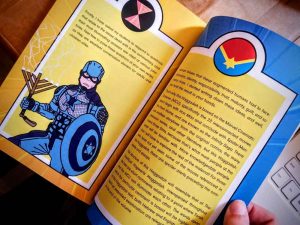 In his commentary on Yahatz, the splitting of the middle matzah, Rosenberg labels the Hebrews a “deeply divided people,” citing the story of Moses trying to break up a fight between two fellow Jews. He compares the Jewish division to Thanos, who tried to use the all-powerful Infinity Stones to erase half the universe’s population, separating families and communities in the ultimate act of fragmentation. Just as the Jews had to overcome their divisions and become a real people to enter the land of Israel, it was only when the Avengers stood together that they were able to defeat the Mad Titan.

And yet, there is a more powerful message of unity in, of all places, the introduction of the Haggadah. As the author acknowledges, all of these characters are based on comics with decades of history and lore. However, he keeps the focus on the film versions of the heroes as “that’s what most people at the seder will be familiar with.” While the line may seem expositional, it actually hints at a powerful cultural truth.

You see, there is one survivor of the disjointed media market that even juggernauts like Star Wars and Harry Potter are struggling to survive in. Ever since Iron Man premiered in 2008, the Marvel Cinematic Universe has only grown in popularity, becoming our last piece of monoculture. The movies have grossed $22.5 billion at the box office and, of the top 20 highest-grossing films in the world, six of them are from the MCU.

Yet, some critics will argue that this cultural dominance stifles creative possibility, with renowned director Martin Scorsese calling MCU films “theme parks” rather than cinema. They worry that studios will no longer take the creative risks of the past Golden Age of Hollywood and will continue to tell the same stories over and over again. 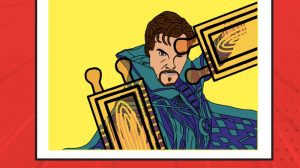 Judaism has faced its fair share of similar criticisms, too. Many believe that the religion is too textual and detail-oriented, allowing little room for creative religious expression. They find the daily and weekly routines exhausting and repetitive, lacking any variation.

The seder—more specifically, the Haggadah—is different, though. For whatever reason, it has spurned a creative Jewish spirit unseen in the faith. While the basic foods, texts and songs usually remain the same at most seders, everyone has their own traditions. Whether it’s subbing in strawberries and chocolate dip for the celery and saltwater at Karpas (a Gelman family favorite) or hitting family members with scallions during Dayenu, each family has ways of making their seder feel like their seder.

This is further demonstrated by the countless numbers of Haggadot out there. Looking for a Haggadah to match your vegan lifestyle? You’re all set. Can’t tear your teenage daughter away from her phone for even one plague? There’s an app for that. Want to read about the history of the Haggadah as you read the Haggadah? Be our guest. From politics to pop culture, there truly is a Haggadah for everyone.

The Marvel Cinematic Universe, then, is in a way, the Haggadah of film. Its overarching narrative and singular tone create a world that serves as the “basic texts” of the films—comprehensive, unifying and ready to be filled with whatever cinematic traditions and genres Marvel wants to employ. Looking for a World War II film to watch with your dad? I recommend Captain America: The First Avenger. Spending an afternoon with a die-hard Star Wars fan? Try Guardians of the Galaxy. Love heist films? Ant-Man is your guy. And while each of these films stands on its own, the shared universe means every storyline impacts the next film, giving the MCU movies meaning that extends beyond the credits.

No matter which Haggadah you use this year or what traditions you incorporate in the seder, after the holiday, you’ll be able to call up family and friends and chat about the dipping, breaking and singing that connects one seder table to the next. With The Superhero Haggadah, Rosenberg shows that this monocultural and mono-Jewish experience does not have to be stifling or boring. It can be creatively liberating, allowing everyone to express themselves in their own way while sharing a religious and cultural language to create a unifying experience. It reminds us that, as wonderful as it is to make a story our own, the best ones are those we share together.

Over the last few years, the Marvel Cinematic Universe has made an effort to increase its representation of minorities. Moon Knight, released on Disney+ in March, became the first MCU project to feature a Jewish superhero.

END_OF_DOCUMENT_TOKEN_TO_BE_REPLACED

Kyiv Diary 4/15/22: Passover, the Holiday of Freedom, Is More Relevant Than Ever

The story of Passover is about freedom and sacrifices made on the road to liberation, and this year it seems more relevant than ever. It might as well be about Ukraine.

END_OF_DOCUMENT_TOKEN_TO_BE_REPLACED

Charoset From Around the World

There’s more to charoset than just apples, walnuts and sweet red wine. Chef Vered Guttman demonstrates how this symbolic Passover food is prepared around the world. She also makes homemade horseradish and other Passover specialties.