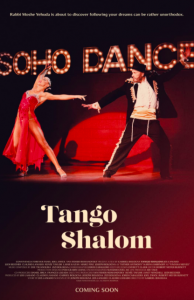 Hasidic rabbi Moshe Yehuda is a father of five whose Hebrew school is on the verge of bankruptcy. His brother, Rahamim, is entangled in a scam while simultaneously begging for help to pay for his upcoming wedding to, oy, a progressive woman. This disastrous state of affairs is exacerbated by their mother’s antipathy toward Rahamim’s fiancée, Marina Zlotkin, as well as her son’s future mother-in-law, Leah. Rabbi Yehuda, a talented amateur hora dancer in his spare time, tramps across Brooklyn in search of paid employment. With no end in sight to his mounting tsuris, he and his family face disastrous financial and emotional ruin. 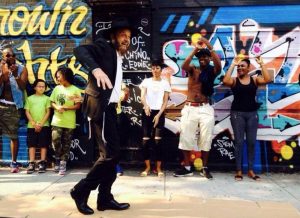 But then one day, while waiting at a bus stop, Moshe hears music coming from a Latin dance studio. Intrigued, he wanders over to see what is going on and peeks in while an Argentinian tango lesson is in progress. As the students leave the premises, the stunningly beautiful teacher, Viviana Nieves, beckons Moshe in from the street. Explaining that he has never seen such dancing before, Moshe performs the hora, which prompts Viviana to beg him to partner with her in a televised competition, which has a large cash prize. He’s not the only one in search of financial rescue—Viviana is also in urgent need of money to pay her daughter’s medical bills, which her insurance won’t cover. Tempted as he is, there is one gigantic hurdle: As an Orthodox Jew, he cannot possibly countenance having physical contact with a woman other than his wife! What to do?

Moshe consults not only his own Grand Rebbe Menachem but also local Catholic priest Father Anthony, Imam Ahmed at a nearby mosque and Sikh holy man Ravi Pranja the Traveling Mystic. After listening to their wise counsel, his course is set.

Of course, none of this is based on fact, but Gabriel Bologna’s Tango Shalom is just the tonic many of us desperately need after a year of COVID-19 misery and lockdowns. The film has burst onto the scene to gladden our hearts and lift everyone’s spirits. This riotous comedy is an explosion of pure joy, with all the indications of a huge hit in the making.

Any resemblance to My Big Fat Greek Wedding comes as no surprise given this film’s illustrious pedigree. Joel Zwick, director of that film, has a producer credit for Tango Shalom, while actress Lainie Kazan, who played matriarch Maria Portokalos in the Greek family, is now Leah, mother to Rahamim’s future bride, Marina. Family connections in the fictional Crown Heights community are echoed in the real-life relationships of much of the team. Siblings Jos and Claudio Laniado play, respectively, Rabbi Moshe and his brother Rahamim, with Justine Laniado (Jos’ daughter) playing his on-screen child Shira Yehuda. 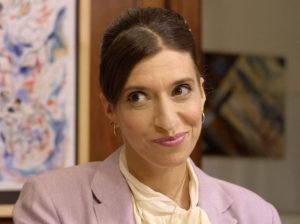 Renée Taylor (famous as the domineering Jewish mother in the HBO series Dream On) plays Deborah Yehuda, mother of Moshe and Rahamim. Ms. Taylor’s recently deceased husband, Joseph Bologna, plays Father Anthony, their son Gabriel is the film’s director and his wife, Zizi Bologna, is credited as one of the music supervisors.

The vibrancy of Brooklyn is brought gloriously to life—from the yeshiva gossip mongers with their payos and black kippahs spying on Moshe’s every move, the Sikh temple with women in bright clothing and men in colorful turbans to young African Americans just hanging out on the sidewalk having fun. The stunning costumes of tango teacher Viviana Nieves, and the spectacular performance by professional dancer Karina Smirnoff (from Dancing With the Stars, which she won in 2011) who plays her, are unforgettable. 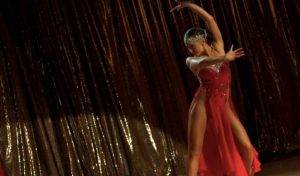 Not wanting to introduce any spoilers, suffice it to say that Moshe comes up with a most ingenious way of getting around the religious strictures prohibiting him from practicing his tango routine. He hatches a plan with his wife, Raquel, along with Rahamim and his fiancée, Marina, to deceive everyone in the community so that he and Viviana can evade prying eyes and whispered censure. Even the bickering mothers surprise us with their participation in this endeavor.

New friendships are formed across ethnic and religious boundaries, slights are buried and compassion and understanding abound in this gloriously funny and entertaining film.

With a concluding message of universal harmony, peace, pluralism, love and tolerance, it is perfect family viewing.

Tango Shalom scooped up Best Critics Film award at the Jaipur International Film Festival in January. Only just released in the United States in early February, it was voted Best Comedy at the Montreal Independent Film Festival, where Jos Laniado won the Best Actor award. Many more accolades are bound to follow.

END_OF_DOCUMENT_TOKEN_TO_BE_REPLACED

7 thoughts on “Tango Shalom | The Dancing Rabbi of Crown Heights”