Are you team applesauce or team sour cream?
2020 November/December, Talk of the Table

Hanukkah’s great culinary divide runs right across my brother Paul Freedman’s dining room table in suburban Pelham, New York. A Yale professor and food historian, Paul loves sour cream with his potato latkes and lots of it. By contrast, his wife, Bonnie Roe, prefers a small dollop of applesauce. Paul’s choice is odd to me, since, when we were children, sour cream formed the
mini-icebergs in a purple sea of borscht, but neither of us remembers it as a latke topping.

My grandmother, a Litvak who arrived at Ellis Island by herself at age 16, served up what I remember as desultory latkes—dense, and grayish in color. But they were the real old-country deal, hand-grated and served with applesauce more as an afterthought than as a topping.

Paul believes his preference for sour cream comes from his days as a graduate student in California, where he got accustomed to dips cobbled together from Lipton onion soup mix. Bonnie, a Manhattan lawyer, says she is “not really enthusiastic about large amounts of sour cream on anything.” Applesauce, she says, is “healthier and less caloric.” But as a peace gesture of sorts, she now tops her latkes with a small portion of sour cream alongside the applesauce and sprinkles the sour cream with smoked paprika.

Like Paul and Bonnie, latke eaters and experts all have firm convictions about their preferred topping. “I’m definitely an applesauce person,” says Joan Nathan, a leading authority on Jewish food and author of King Solomon’s Table: Jewish Cooking in America and 19 other cookbooks. By contrast, food maven and former news editor of the Detroit Jewish News Keri Cohen of West Bloomfield Hills, Michigan, says sour cream on a latke is “like the whipped cream on a sundae.”

There are plenty of new toppings too. Nathan often writes about what she terms “designer latkes”—made from ingredients such as carrots and yucca instead of, or in addition to, potatoes. Updated toppings, she says, include goat cheese and crème fraiche. Nathan herself plans to serve traditional brisket for Hanukkah this year, but may also prepare curried sweet potato or zucchini latkes, in addition to the usual potato. Applesauce will take a bow, naturally. And sour cream might get an infusion of cilantro.

Historically, toppings have generally been the product of local availability. The “land flowing with milk and honey” certainly suggests dairy was known to the ancient Hebrews. In Eastern Europe, sour cream proved to be an easy way to preserve cream in the pre-refrigeration era. The high-fat content made it perfect for all sorts of dishes, Jewish and non-Jewish, from herring, kugel, blintzes and coffee cake to borscht. Russians call it smetana and use it in beef stroganoff and meat-filled palacsinta (crepes). It’s also an essential ingredient of Hungarian paprikash and some forms of goulash.

Apples, on the other hand, hark back to Adam and Eve. Greek Jews celebrated the Maccabean victory by serving duck with apples, according to Gil Marks’ seminal Encyclopedia of Jewish Food. They also prepared apple fritters and fried apple rings.

In the Ashkenazi realm, as in America, apples were harvested in late summer and fall, just in time for Rosh Hashanah, when they were dipped in honey and served in the hope of a sweet new year. Leftover apples could be stored until Hanukkah—and some would last until spring for Passover haroset. In addition to apples’ lengthy Jewish history, applesauce enjoys another key advantage: It’s not dairy, so it can be served with latkes cooked in chicken schmaltz, a commonplace in the old country.

Writer Ruth Seligman, who lives in Riverdale in the Bronx, grew up in a kosher home in Cleveland and prepares applesauce much as did her mother Barbara Rosenbaum, an Auschwitz survivor who met Ruth’s rabbi father in a post-war displaced persons camp in Germany. Barbara, who died in 2009, lost her parents and a 5-year-old brother upon arrival at Auschwitz. But five of seven siblings survived and together they produced some 200 children, grandchildren and great-grandchildren. The applesauce she made with her sisters was much like what her own mother yielded from apples picked at a family farm near their town in what is now Ukraine. Ruth recalls “a bumpy, coarse but delicious applesauce from apples we could pick at many places around Cleveland in the fall.” She prefers applesauce, but she’s willing to indulge sour-cream partisans with a topping whipped up from non-dairy Tofutti sour cream, proof that toppings are evolving like the fried foundations they anoint.

Cara De Silva, a food journalist and editor of In Memory’s Kitchen: A Legacy from the Women of Terezin, is the rare ecumenical latke consumer, spooning equal measures of sour cream and applesauce onto her plate. One of the earliest pancake-style celebrations of Hanukkah took place in medieval Italy, De Silva says. Sephardic Jews expelled by Ferdinand and Isabella in 1492 fried up fritters—cassola—from cheese. In addition to Hanukkah, they evoked the memory of Judith, the Maccabean-revolt-era heroine who plied oppressor King Holofernes with cheese and wine until he fell asleep—and then beheaded him, thus saving the Israelites yet again. Today, ricotta fritters are a nod to this theme—and a fashionable alternative to potato latkes—with sweet toppings that include honey, maple syrup, strawberry jam and agave nectar.

Latkes themselves, De Silva says, are a “tabula rasa, a blank slate waiting to be filled in.” The word “latke” itself is derived from the Ukrainian word for “pancake,” oladka, and before the Conquistadores got potatoes from the Incas and introduced them to Europe, Jews made latkes from buckwheat groats and other grains. “The latke has a complicated history,” says De Silva. So do toppings. In Mexico, mole latkes are gaining popularity, she notes.

For me, nothing beats fresh homemade applesauce spiced with a little cinnamon as the yin to salty potato pancakes’ yang. But no matter what kind of latke you fry or which topping team you play on—applesauce, sour cream or something way beyond—the whole ritual is reassuring in a time when we need all the reassurance we can get. “Jewish tradition is comforting, especially during the pandemic,” says Joan Nathan. “Whatever you had in childhood is all the more welcome now.” 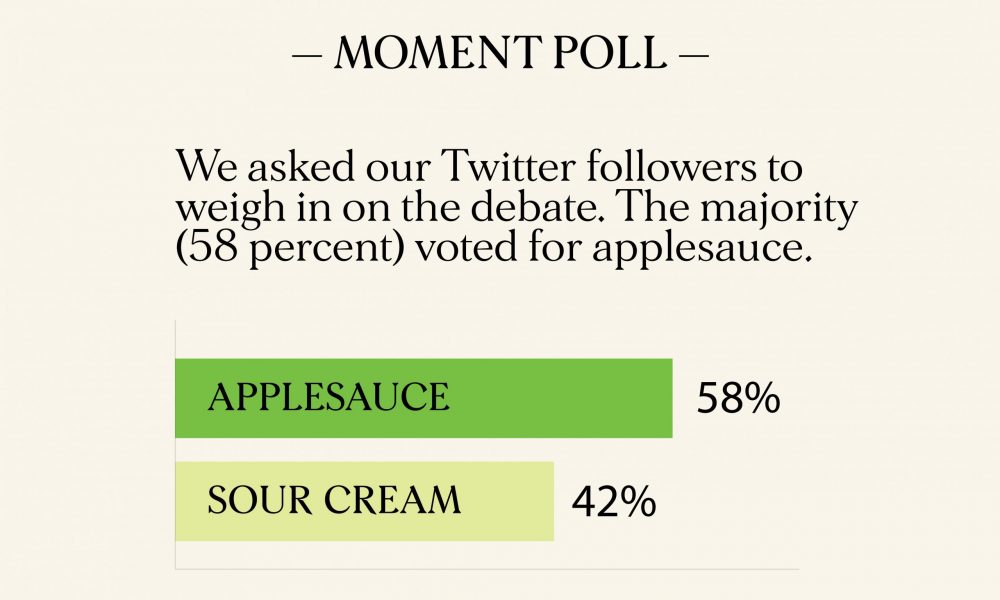 1. Quarter the apples and the lemon. Place in a heavy pot with cinnamon sticks. Add apple juice, cider or water. Cover, bring to a boil, and then simmer over low heat, stirring occasionally to turn the apples and making sure they do not stick. You may want to add some liquid. Cook about 20 minutes, or until the apples are soft.

2. Remove cinnamon sticks. Put the sauce through a food mill and adjust seasoning by adding honey, brown sugar, or maple syrup to taste.

1. In a jar, mix the cream and lemon juice (or vinegar) together, then pour in the milk. Screw a lid on tightly and shake well.

2. Remove the lid and put a clean piece of kitchen paper over the jar and secure it with a rubber band.

4. After 24 hours it should be quite firm. Give it a stir and cover it with a jar lid. It will keep in the refrigerator for two weeks or so, if it lasts that long!

Note: Because there are no thickeners or gelling agents, your homemade sour cream may be thinner than commercial brands you may be used to.

“Latkes themselves are a tabula rasa, a blank slate waiting to be filled in.”

END_OF_DOCUMENT_TOKEN_TO_BE_REPLACED

2019 November-December, Talk of the Table

END_OF_DOCUMENT_TOKEN_TO_BE_REPLACED

2019 September/October, Talk of the Table

Slow cookers are back. Not the clunky ones your mother used to have, but shiny, multifunction contraptions that are now a must-have in every kitchen.