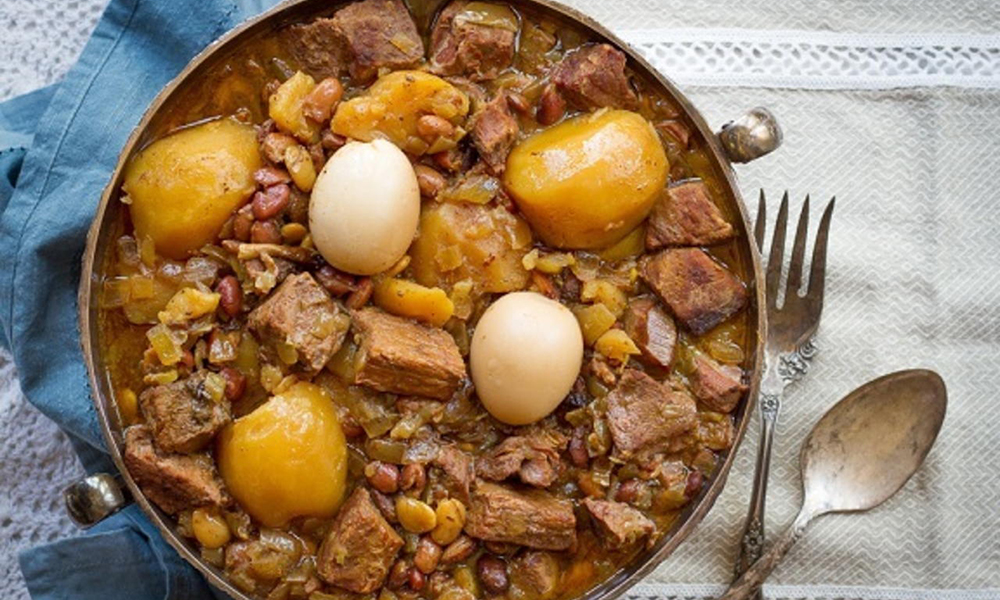 Slow cookers are back. Not the clunky ones your mother used to have, but shiny, multifunction contraptions that are now a must-have in every kitchen. Over the past 15 years, sales have skyrocketed. At the same time, slow cooker cookbooks have also changed: They don’t resemble the 1970s cookbooks that taught overextended working housewives how to prepare chili con carne or a casserole flavored with canned cream-of-mushroom soup. The mission of modern slow cooker cuisine is to create chef-quality, fresh-ingredient recipes with less hassle.

Like other great ideas, the slow cooker started with a Jewish mother. Conceived in 1936 by Chicago-based inventor Irving Nachumsohn—who later adopted the less-German-sounding surname Naxon—the appliance was inspired by stories of how his grandmother prepared cholent in Lithuania. Prohibited by the laws of kashrut from cooking on Shabbat, she—like many Jewish women in Eastern Europe—combined dried beans, potatoes and likely a cheap cut of meat in an earthenware pot, then sealed it with a little flour mixed with water. Her daughter then carried it to the village bakery, where it was placed in a large communal oven alongside the cholent pots of other Jewish families. The oven was turned off for the night but retained a steady low temperature that cooked the stew to golden-brown perfection.

Naxon, as his daughter told NPR a few years ago, wanted to recreate that long-lasting low and even heat for the modern home cook, and in 1940, he received a patent for what he called The Naxon Boston Beanery, the world’s first dedicated electric slow cooker. Decades later, Naxon sold his company to Rival, a Kansas City manufacturer, which gave the Beanery a makeover with fashionable color options and a new name: Crock-Pot. It went on the market in 1971, and millions of Americans bought it to make Sloppy Joes and chili-cheese fondue. Jews, however, adapted the Crock-Pot for its original purpose: the Sabbath stew.

That stew dates back to a modest grain and meat porridge-like dish called hareesa prepared during the Persian Sasanian Empire from the 3rd to 7th centuries. Wheat, lamb or chicken, and cinnamon bark were salted, beaten to a smooth paste and left to cook until dawn. The 13th-century Iraqi cookbook Kitab al-Tabikh (Book of Dishes) by Al Baghdadi recommended cooking hareesa in a tannur, a wood and charcoal fire oven, rather than over an open fire, so the heat would evenly surround the pot. When it was done, the hareesa was topped with melted tail-fat and sprinkled with ground cumin and cinnamon.

As Islam spread, so did hareesa, and it soon became a favorite dish of Jews from Iraq and Iran to Georgia, Armenia, Yemen and North Africa. Each community added its local flavor and traditions. In Spain, for example, Jews added fava beans, and it became known as hamin di trigo (warm dish of grain), a Mishnaic name that comes from the phrase tomnim et ha’hamin, insulating the hot things. (Today it is known simply as hamin—warm food.) But always, hamin kept to the same principle—a hearty dish that could be prepared before Shabbat, cooked overnight on low heat and served warm the next day.

The Sabbath stew also stirred halachic controversy, becoming a source of a heated debate between the Karaite Jews and mainstream rabbis in the early medieval period. The Karaites, who believe only in the Bible as a source of authority, interpret Exodus 35:3, Lo Teva’aru Eish as “You shall cause no fire to burn” on Shabbat, and therefore they banned all warm food during the seventh day. Rabbinic Judaism, however, interpreted the sentence as “You shall kindle no fire” on Shabbat, meaning as long as the fire was lit before Shabbat, it was permitted. In some cases, it was regarded as a mitzvah. “Our rabbis ruled we should enjoy hamin on Shabbat. He who does not eat hamin, should be checked out to see if he is not a Min (a heretic),” Rabbi Zerachiah Ha-Levi of Spain wrote in rhyming Hebrew in the 12th century. In other words, if you don’t eat hamin on Shabbat, you’re probably not a Jew. During the Spanish Inquisition, those searching for conversos who still practiced their Jewish faith in secret looked for those eating, among other dishes, the Sabbath stew. Documents from that era tell the story of Juan Sanchez Exarch, who was accused in 1484 of keeping Shabbat and eating a dish called hamin.

The Jewish expulsion from Spain led to even more hamin variations. Jews brought it with them to Morocco, where chickpeas replaced fava beans and it was called dafina, adafina or skheena. Hamin also made its way to France, and from there to Germany and Poland, where it eventually picked up the name cholent, possibly from the French word for hot, chaud, or from the Latin calentem. White beans replaced the fava; and root vegetables and potatoes were thrown in the pot, creating the style of cholent usually served in America and Israel today.

In Israel, where I was born, the tradition of taking cholent to the communal oven continued until electric warming trays were introduced. My grandmother had her own pre-Crock-Pot invention—she wrapped her cholent pot overnight in newspapers and towels and placed it on the warming tray. Long before Irving Naxon revolutionized modern cooking, she and countless other Jews like her were coming up with ingenious ways of observing Shabbat and keeping food warm without feeding the fire.

Cholent can have more liquid or less (which is how I prefer it), but you will need to experiment with your own pot and oven to learn just how much water your cholent really needs. As a guideline, make sure you check the cholent in the morning to see if it still has enough water (up to about half of the casserole).

Cholent is traditionally served with a side of pickles and a fresh salad. A fruit salad or compote will work well for dessert—followed by a long nap!

It is easy to adapt the cholent recipe to make it vegetarian or vegan. You simply omit the meat (and eggs, for a vegan version). Consider adding wild mushrooms or dried porcini and peeled chestnuts. Mix those with the beans at the bottom of the pot.

1. A few hours before you start cooking, peel the potatoes, sprinkle with kosher salt and leave them in the open air. (This step is optional, but it produces sweeter potatoes.)

2. In a large casserole, heat 2 tbsp. of the oil over medium-high heat. Lightly salt and pepper the meat and sear on all sides. Transfer to a platter.

3. Lower the heat to medium-low, add 2 tbsp. of oil to the casserole and add the onions. Cook the onions until golden brown, for about 15 minutes, then add the brown sugar and cook for a few more minutes to caramelize the onions. Transfer a third of the onions into a medium bowl to prepare the kishka stuffing (recipe below).

4. If you’re using a slow cooker, transfer the caramelized onions into it and continue as directed below.

5. Add the beans to the casserole or slow cooker and mix with the onions. Add 1 tbsp. of salt and 1 tsp. of black pepper and mix. Arrange the marrow bones between the beans, then put the beef on top. Arrange potatoes next to the beef and eggs, and kishka stuffing (if needed) on top. Add boiling water to cover the beef and bring to boil.

7. If you’re using a slow cooker, start with the high temperature settings to bring to boil, then cover the pot and cook on low temperature overnight.

8. Transfer the casserole to the oven. If the lid is not sealed well, cover the pot with aluminum foil. Cook overnight. Check in the morning to see that enough water is left; water should reach about half the height of the casserole. Add more as needed.

9. At mealtime remove pot from oven (or turn slow cooker off), remove lid and let stand for 10 minutes before serving.

Kishka is intestine stuffed with flour, fat and onion filling. If you’re brave enough to deal with real kishka, by all means, do so. For the rest of us, the filling itself is simply wonderful, especially when it is placed at the top of the cholent pot and absorbs all the goodness.

Put all the ingredients in a medium bowl. Use your hands to knead everything to create smooth dough. Shape dough into a log and use in the cholent recipe as directed.