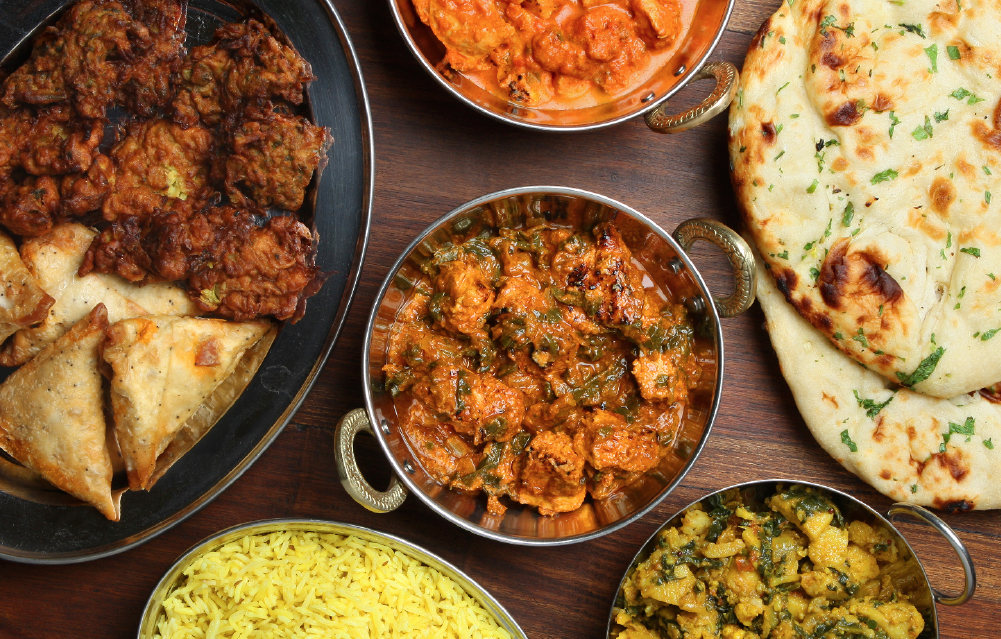 Palak paneer, chana masala and the egregiously treif-sounding butter chicken may not scream “Jewish” and were highly unlikely to grace your grandmother’s holiday table. But Jews have a rich history in India and an even richer cuisine to match.

For centuries, India has been home to Jews, primarily from three distinct groups: the Cochin Jews, the Bene Israel and the Baghdadi Jews. The Jews of Cochin, a port city on India’s southwestern coast, in the state of Kerala, have lived in India for at least a millennium. According to their tradition, they settled there after the destruction of the second temple and have been “augmented by waves of immigration from Yemen, from Turkey, from Egypt, from Syria, and even from Italy,” says Nathan Katz, professor of religious studies at Florida International University. They were an educated, prosperous bunch—some were involved in international trade, which often revolved around spices. “Kerala was always where spices were grown, so they had the freshest, most wonderful, pungent spicing in their food,” says Katz. Coconut and coconut oil were abundant and made their way into the Jewish dishes. A snack called bonda, a fritter coated with chickpea flour and then fried, comes in both savory and sweet varieties; in Cochin, a version made with coconut and raisins took the place of potato latkes during Hanukkah.

The Baghdadi Jews settled in Bombay and Calcutta when British rule began in the 19th century, coming from Iraq but also from Syria and elsewhere in the Middle East. Lured by economic opportunities—and by alarming anti-Semitism in some of their home countries—some found tremendous wealth as industrialists, real estate developers and manufacturers, an affluence reflected in their food. “Baghdadis had the greatest cuisine,” says Katz, describing it as “a wonderful combination of Middle Eastern food using local spices and ingredients. They love pulaus and biryanis—rice dishes that are very elaborate.” Aloo makalla—a potato dish that Gil Marks, author of Encyclopedia of Jewish Food, describes as “the most famous Jewish dish in India”—is the product of a combination of Arabic and Indian cooking practices common among Baghdadi Jews. Long-simmered in hot oil, whole potatoes form a hard exterior but stay soft inside, leading the flesh of the potato to “jump” out when cut into—the root of the dish’s nickname, “Jumping Potatoes.” A classic Friday night dish, the potatoes are often served with fenugreek chutney, murgi (spicy chicken), bhaji (curried potatoes and vegetables) and other vegetable and rice dishes. The generous use of sesame and nuts in Baghdadi cuisine also reflects Middle Eastern lineage, notes Shalva Weil, senior researcher at Hebrew University and editor of the book India’s Jewish Heritage.

Historically, the largest group of Jews in India is the Bene Israel, discovered by European missionaries in the 18th century in the western Indian state of Maharashtra. In a story worthy of Shakespeare, Bene Israel lore tells of a shipwreck in antiquity that stranded the Bene Israel in India, where they remained and mingled with the native people of Maharashtra. (Although the Bene Israel physically resemble the local people, genetic testing of the Y chromosome indicates that they descend from Middle Eastern Jews.)

Whatever their origins, the Jews of India shared a love of sweets; confections abound, often in conjunction with a holiday. Gulab jamun, milk-based fritters soaked in a sugar syrup, are popular among the Bene Israel during Hanukkah; the group often ends Yom Kippur fasts with padhar, a coconut-filled crepe; Purim is associated with malpua, a sweet pancake made with bananas, pineapple and other fruits and served with a syrup. Another favorite Bene Israel sweet is laddu, a ball-shaped snack made of flour and sugar believed to produce a baby boy in pregnant women. “I was living with the community” during a pregnancy, says Weil, and “every time they saw me they were busy plying me with these laddus.” (The charm seems to have worked in reverse—Weil had a daughter.) Machboz, a pastry stuffed with dates, walnuts and cheese, is a typical treat among Baghdadi Jews. Desserts like this are sold at Nahoum and Sons, a decades-old Calcutta bakery that is the cornerstone of the dwindling Jewish community, now counted in tens instead of thousands.

A sweet dish also plays a crucial role in a Bene Israel ceremonial rite known as malida. The prophet Elijah is “extra special” to the Bene Israel, says Weil; the community believes that he rescued them from their shipwreck and that he appeared to them again 15 months after the landing. The Jews adapted a local ceremony used on occasions of thanksgiving or life-cycle events such as weddings, births, recovery from illness and graduations, turning it into an offering to Elijah. At the center of the ceremony is a dessert called malida, made of pressed rice flakes called poha, which are often enhanced with coconut, cardamom, almonds and pistachios. The malida is offered on a round platter that also holds fresh fruit and flowers or myrtle branches; in addition, goat, chicken or lamb may accompany the malida, symbolizing the Temple offering. Other groups—Christians, Muslims, Hindus—perform a similar ceremony, but dedicate it to their own saints or deities.

Today, the majority of Bene Israel and India’s other Jews have left India, largely for Israel. Although the Jews were generally treated well in India, Zionist urges—and, says Katz, the feeling that they might “lose their privileges” after British rule ended—propelled them from the subcontinent. But the malida ceremony is still practiced in the expatriate community in Israel, where Indian cuisine is flourishing. Indian food “took off” in Israel “when Israeli backpackers started falling in love with India from the 1990s on, and diplomatic relations were established between Israel and India in 1992,” says Weil. India’s Jewish food—like the people who created it—has taken root in a new home.

About 3 cups vegetable, safflower or peanut oil for frying

1. Place the potatoes in a large pot and add water to just cover. Add the salt and turmeric. Bring to a boil and parboil for 30 seconds. Drain. Let cool, then pat dry. Prick each potato once with the tines of a fork.

2. Place the potatoes in a karahi (Indian wok) or wide-bottomed pot and add enough oil to cover. Bring to a boil, without stirring, over medium-high heat, about 15 minutes.

3. Reduce the heat to low and simmer, shaking the pan occasionally, until the potatoes are crusty and lightly golden, about 1 hour. At this point, the potatoes can be removed from the heat and allowed to sit, in the oil, for up to 3 hours.

4. Shortly before serving, increase the heat to medium-high and fry until the crust is very hard and golden brown, about 10 minutes. Drain on paper towels. Serve warm.

FoodTalk of the Table