Book Review | The Power of DNA, Dolls and Delis

Last month, The New York Times published a piece called “Saying Goodbye to Hanukkah.” The tagline: “I lit the menorah as a child, but my kids are growing up in a different type of household.” The author, who grew up Unitarian with a Jewish father, described the nostalgic pull of her childhood Hanukkah rituals and her ultimate decision that celebrating the holiday with her kids wouldn’t “feel authentic” because of her lack of Jewish identity. The essay provoked a wave of fraught conversation across Jewish social media, as people immersed in the kinds of Jewish community and identity the essay writer claimed to lack—text and language study, knowledge of prayer, involvement in Jewish communal organizations—argued at length about how to nurture those activities. What to do about American Jews who don’t do Jewish things—the 50 percent who marry non-Jews or the 30 percent who told a Pew Foundation survey that they had not attended a Passover seder that year?

What such worriers may be missing is that, in fact, many such people are doing Jewish things—just not those things. That argument is elaborated in rich detail in Rachel B. Gross’s Beyond the Synagogue: Jewish Nostalgia as Religious Practice. Through careful research and lively prose, Gross documents the Jewish practices of Jews who often (though not always) describe themselves as otherwise unaffiliated. Gross finds not just millennials but also many baby boomers and Generation X-ers who express and transmit their Judaism primarily through what she calls “practices of nostalgia.” More strikingly, she urges her readers to see this nostalgia as a form of religious practice. If we do, she argues—correctly, in my opinion—we won’t see a decline but a different, less institutionally focused way of “doing Jewish.” The participants themselves may or may not see it as religious, but it still matters to them, grounding them in a sense of themselves as Jews in the contemporary American landscape. 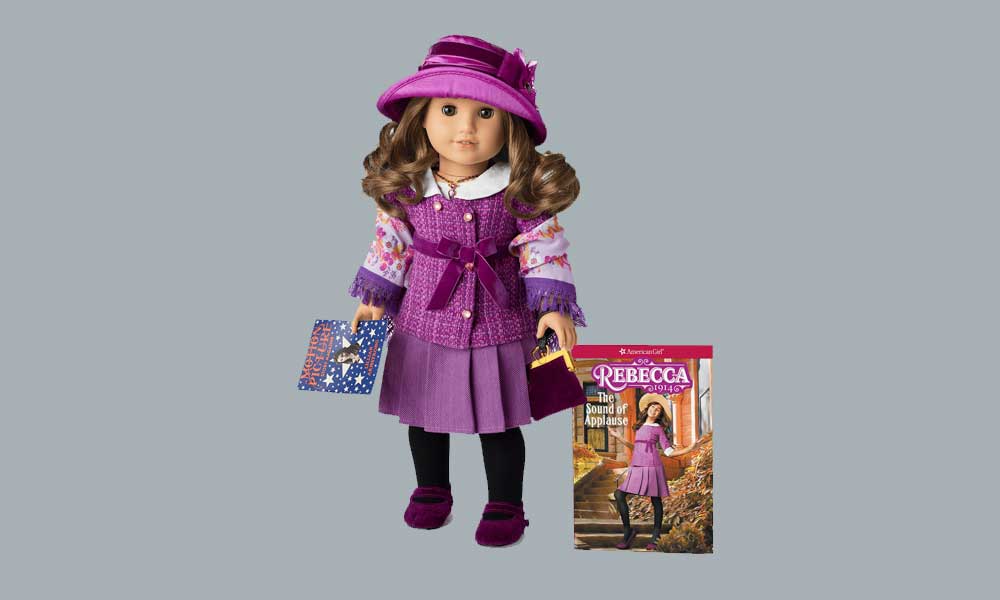 Rebecca Rubin, the tenth historical American Girl doll, debuted in 2009. Her character is a nine-year-old living in New York in 1914 where she was born after her parents and grandparents, Russian Jews, immigrated to America.

Gross examines four different arenas of what she terms Jewish nostalgia: family genealogy; historic synagogues that have been turned into heritage sites; children’s books and toys, and the resurgence and reinvention of the deli. In each case, she shows how nostalgia, mainly for Eastern European Jewish culture, fundamentally shapes American Jewish practices and identities.

What does it mean to say these activities are “religious”? Gross’s definition of religion—“a network of relationships among the living, between the living and the dead, or between humans and the divine”—is familiar to religious studies scholars, if less so outside academia. (It draws from the work of Robert Orsi, a highly respected scholar of American Catholicism.) It’s a more capacious definition than many clergy or laity would recognize, but it allows scholars of religion—many of whom are as interested in networks of relationships and their related emotions as in the institutions, rituals and theologies of organized faith—to see religious behavior in places where others do not necessarily look.

In her four case studies, Gross demonstrates how nostalgia does much of the same work as religion and can therefore be properly understood as religious itself. For instance, she shows how individuals find meaning in tracing their family histories—particularly in remembering those lost to the horrors of pogroms and the Holocaust—but also how those researching their own family histories or others’ become connected in communities both local and digital—through networks, journals, conferences and websites—and also in “a broader imagined community” encompassing past and present. As they dig deeper into family history, some researchers adapt formal religious practices, such as memorializing ancestors with one of the glasses of wine at the Passover seder. Others weigh in publicly on communal questions, such as where Holocaust victims should or should not be memorialized.

In her four case studies, Gross demonstrates how nostalgia does much of the same work as religion and can therefore be properly understood as religious itself.

Perhaps most interesting are the moments when participants in these new practices run into complexities that force them to think more deeply about the meaning of what they are doing. Gross tackles the discomfort among some Jewish genealogy researchers with the large Mormon presence in genealogy, given the Mormon history of posthumously baptizing those who died in the Holocaust. She also examines how people cope when their research demonstrates that, say, a beloved grandparent had fabricated a past. How best to honor both the historical record and family stories? Gross argues that these practices—the networking, the drawing of boundaries and the recovering of stories—all create networks of relationships that ground people in a sense of themselves as Jews and as part of Jewish history. It’s sacred work.

In considering historic synagogues, Gross parses what it means to memorialize space. She looks at Newport, Rhode Island’s Touro Synagogue; the Lower East Side of New York’s Eldridge Street Synagogue; the Jewish Museum of Florida in Miami Beach, and the Vilna Shul in Boston. These are all historic synagogues in tourist destinations where historians “present nostalgia for Eastern European immigrant histories as a fulfillment of a mitzvah of longing for the past in order to create relationships with Jews, past, present, and future.” But complexities abound. What makes any given historic synagogue a place of worship, a community center, a museum? Why does the Vilna Shul resist being treated as a museum while Eldridge Street embraces the term? What happens when visitors to the Touro Synagogue argue that, because it is a synagogue, they should not have to pay admission fees or follow the set tour schedules? What does it mean for the Eldridge Street Synagogue to hold a festival called “Egg Rolls, Egg Creams, and Empanadas” acknowledging that, in its immigrant neighborhood, waves of Chinese and Latinx immigrants have replaced Jews? What happens when historical accuracy (for instance, the use of women’s galleries) conflicts with contemporary Jewish women’s emphasis on egalitarian worship?

Gross argues that these conflicts do not undermine the religious nature of visitors’ nostalgic investments in the sites and their past, but rather demonstrate their sense of ownership in these places, the pasts they imagine and the Jewish present and future that they care to see. To her, the conflicting understandings of these sites serve as evidence of their religiosity.

I found the chapter on children’s material the most fun, particularly her attention to the Rebecca Rubin doll in the American Girls series—which comes with its own book and mini-history lesson—and to Jewish children’s literature more broadly. This material, she notes, teaches children to be nostalgic for an Eastern European Jewish past (or an Eastern European Jewish American immigrant past) that neither the children in question nor their parents can remember. The stories do this mostly by depicting children’s relationships with their grandparents—though, in fact, the grandparents of today’s children are often also too young to have such memories. Rather than weakening the connection to Eastern Europe, she argues, this distance does precisely the opposite, encouraging children to read themselves into an Eastern European immigrant past, just as the first-person plural “When we were slaves in Egypt” of the Haggadah transports the people at the Passover table back into the Exodus narrative.

Gross deftly integrates religious studies scholarship with consumer culture, or how we choose to spend our money, to argue that the communal and personal commitment to “stuff” like Rebecca dolls is, in fact, religious—a way of demonstrating values and creating feelings. In this reading, the money that parents and foundations spend on children’s books or nostalgic toys is not so different from the money they might spend on Camp Ramah or Birthright, or other ways Jewish adults try to pass on Jewish identity to the next generation.

Family is also central to her chapter on delis. Gross points to how delis, once in decline, are increasingly opening as new, hip venues or restaurant pop-ups, while other established ones rework their existing menus to meet contemporary tastes. These restaurants, including the ironically named Traif in Brooklyn’s Williamsburg, are, Gross argues, sites of nostalgia, even when they offer blatantly non-kosher food. They mix family stories into their ambiance—through photos, text or merely by eliciting patrons’ own histories. The goal, at least in part, is a connection to a Jewish past.

Gross makes a compelling case for all of these phenomena, at best adjacent to Jewish institutional life, as sources of Jewish practice, community, identity and religion. She argues that those with sociological and communal concerns about Jewish continuity are looking for Jewish identity in the wrong places—or, at least, in not enough places. Ever worried about the graying of the synagogues, they never think that perhaps the problem is with the institution rather than with the people who have voted with their feet. Such worriers will likely ask Gross whether nostalgia will ultimately “do enough” to ensure Jewish survival, and they will rightly point out that she does not answer that question.

But this was never the question she set out to answer, and perhaps it is not the most interesting one. Rather, Gross compellingly points to a Jewish life that seems to have been flourishing already for members of at least four generations of American Jews. She gives her readers tools to ask a far more vital question: where to look to discover robust Jewish life as it is occurring all around us.

Samira K. Mehta is an assistant professor in the Department of Women and Gender Studies and the Program in Jewish Studies at the University of Colorado at Boulder. She is the author of Beyond Chrismukkah: The Christian-Jewish Interfaith Family in the United States.