Welcome to “A Momentary Kitchen”—a moment of something (Jewish and foody) to do with your loved ones in these uncertain times. Come in, grab a stool and some tea, kibitz and cook. Each recipe has been chosen for children 10 and over (under 10, please cook with a grownup!) and each will offer variations for dietary needs and palette. Every recipe will take less than 30 minutes to prepare and less than three hours to cook.

Spring is here for some, and many of them are opening their windows to milder breezes. In my city of Ann Arbor, however, it snowed yesterday (two boys made snowmen standing six feet apart). In other cities, cherry blossoms are in bloom, and folks are thinking gardens and lawns. Cooks are dreaming about ramps and fiddleheads, morels, and soon enough, spears of asparagus. Our dinner guests may be virtual, but the season is real, and true to that fact, we’re making an asparagus frittata.

You can also make frittatas of leftovers and items on hand from your pantries and fridges: olives, sliced or cubed tomatoes, slivered onions, broccoli, cauliflower, sliced potatoes of any color; spinach, chard, beet greens without stems (a favorite), minced leeks or sliced garlic cloves, every color of fresh pepper, shredded basil or cilantro; mushrooms, shallots, artichoke hearts, a bit of this or that from the produce aisle. And bread—the staler, the better. Crumbled old toast, shredded loaf ends, challah from last Friday or cubes of baguette.

This is an early spring frittata, so it needs a body. You could use a crust, but then you’d be making a quiche. Use matzah, and it’s a bit like matzah brei. Traditionally, frittatas are folksy, round egg bakes finished over a burner or in an oven. What you use in the frittata can be minced, cubed, julienned, sliced or whole. If you use whole asparagus or sliced eggplant, brown first on the grill or saute in a pan. I love deep egg bakes containing summer tomatoes or grilled asparagus placed lengthwise across a shallow dish. I lean away from meats in frittatas, but a rasher of beef bacon, crumbled lamb or chicken can take frittatas into foreign territory, more Alsatian or Moroccan. Improvise, and you can bring a different flavor to your table every morning or evening. 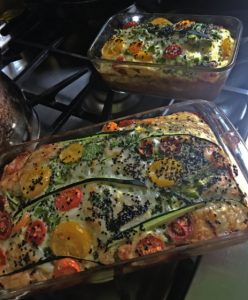 Two small asparagus frittatas, one made in gratitude for two neighbors, hospital workers treating the infected day and night. I wanted to give them a small window into spring.

A 12-inch cast-iron skillet is the standard for cooking frittatas, but I find happiness in the variety of results found from glass casseroles, ceramic pie plates, anything but aluminum and non-stick, which aren’t that healthy to use, and which allow too much or too little heat. We want that particular contrast of crunchy edge and soft interior. A dry frittata is a sad frittata. There’s the crunchy bottom of the frittata (which if you flip it out of the pan gets adulations and a nice caramelization of vegetables and cheese), the eggy middle, and the top, which, if you do not flip it out of the pan, can present beautifully. Asparagus happened to be on sale the last time I was in the grocery store, and I know it lasts weeks in the fridge. So I began there and used other odds and ends to decorate it.

One bunch of asparagus, stringiness peeled off, coined except for the tops

A drop or two of balsamic vinegar

One cup of half-and-half or milk

One tablespoon of nutmeg

One tablespoon of basil

One tablespoon of parsley

One tablespoon of pepper (I like mine peppery, but alter to taste)

Two cups of shredded cheese (mozzarella, cheddar, Swiss, Monterey Jack…parmesan is great as a second cheese, but a bit sharp on its own)

Sesame or nigella seed to taste

1. Preheat the oven to 400 degrees. Prepare the skillet by making sure, over a low flame, that olive oil is spread evenly and generously on the bottom and insides of the pan. Let that sit while you pan grill the asparagus to get rid of extra moisture and give it some sweet burnt spots. If you dare, put a few drops of balsamic vinegar into the pan, letting that burn off (effecting a little reduction) and toss in a little salt.

2. Set asparagus and bread aside. In a large mixing bowl, beat the eggs, milk, the rest of the salt, pepper, nutmeg, basil and parsley until frothy and blended. In the oily skillet or oiled dish, layer the remaining ingredients. (I put bread at the bottom of this one, since I am not flipping, and I want any chunk of it to stand happily on its own.)  A layer of bread, cheese, one (or mix) of veggies, then repeat, until the ingredients fill the skillet with room left for the egg mixture to settle in. The denser the ingredients, the heartier the frittata, especially if you are using potatoes.

3. Pour the egg mixture slowly into the middle of the pan, pressing slightly to ensure the batter stays put where it’s supposed to go. Fill the pan up to a half inch of the top of the skillet. Dip decorative vegetables into the egg mixture before placing them carefully on top. (Or, try placing patterns of veggies on the bottom of the pan, if you intend to flip later.) You can start your frittata on the range, but I put mine in the oven for about 35 minutes, until a knife inserted into its middle comes out clean. Serve hot. I also love it the next day chilled.

Flipping food is not for the fainthearted or jelly-armed, and there are special pans made for this. Use plenty of oil in a seasoned skillet, have a plate ready to place over the frittata, and confidently flip the frittata onto the plate. Did it fail to come loose? Let it fall back in the pan and try to unstick the spot by gently knifing the edge before trying again.