“No Fear” Rally Against Antisemitism in D.C. Draws Over 2,500

More than 2,500 people showed up at the National Mall next to the U.S. Capitol in Washington, DC in solidarity against antisemitism Sunday.

Speakers included Elisha Wiesel, son of the late Nobel Laureate and Moment cofounder Elie Wiesel; Jeffrey Myers, rabbi at the Tree of Life synagogue in Pittsburgh, PA, where 11 were killed in 2018; Talia Raab, who received rape and death threats after organizing a “Walk for Israel” in Naperville, IL; and Rabbi Schlomo Noginski, who was stabbed repeatedly outside a Jewish center in Boston earlier this month. “I remember how, even as a young child, I experienced terrible antisemitism,” said Noginski, who was born in Russia and raised in Israel. “Never in my darkest dreams did I imagine I would feel the same way in the United States.”

Eric Wachter, from Bethesda, MD, came to the rally with his wife and two kids. A pro-Israel banner outside their synagogue, where his kids attend preschool, was vandalized in May. His kids held up signs reading, “I should feel safe in school” and “I should feel safe at synagogue.” 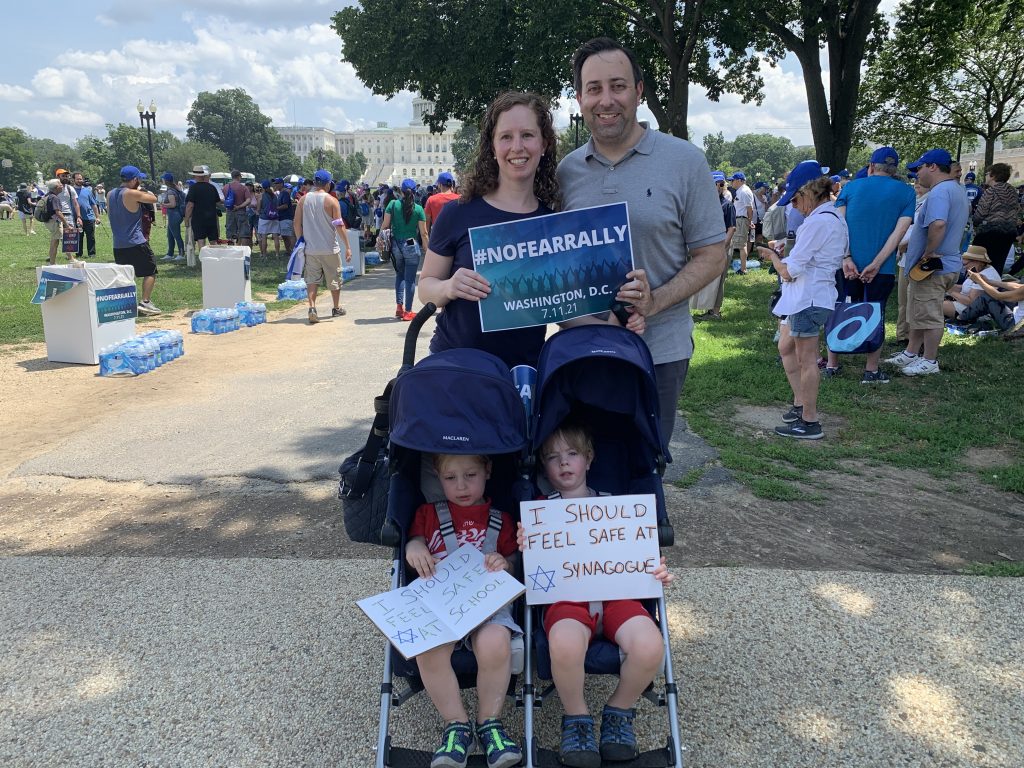 Eric and Miriam Wachter of Bethesda, MD with their sons, ages 2 and 4.

Rabbi Michael Shadick and his family flew in from Michigan to attend the rally. In 2019,

Schadick found antisemitic posters, including a picture of Hitler, on the door of his synagogue in Grand Rapids, MI. “For us it was a wake-up call, that it’s not just somewhere else, but right in our backyard,” Shadick said.

Several organizers told Moment that it was important to create a diverse coalition, what they called a “big tent,” spanning denominational and political spectrums. The rally’s website states that they “welcome all Zionist, Jewish organizations and allies.” But some progressive organizations, including J Street, T’ruah and Americans for Peace Now, declined invitations to cosponsor the rally because of what they saw as the organizers’ unfair conflation of anti-Zionism with antisemitism.

“We welcomed everybody into that tent, but the tent has poles,” said Alan Ronkin, regional director of the American Jewish Committee and one of the rally’s organizers. “People who are not on board with the Jewish homeland really are not going to be in this tent.”

Forty-five percent of Jewish adults say caring about Israel is “essential” to what being Jewish means, according to a 2020 Pew Research Center survey.

Bruce and Malka Kutnick of Kensington, MD, held signs that read, “Against: antisemitism, occupation,” and “For: tolerance, 2 states.” Bruce, a member of J Street, said he was disappointed both that the rally’s messaging turned off progressives and that progressive groups didn’t encourage their members to attend the rally anyway. “I don’t think we need to focus on the definition of antisemitism,” Kutnick said. “That we can save for the academics because in my mind it doesn’t really mean that much. There are far broader issues.”

Michael Sherr, 22, said many of the speakers frustrated him because he is “proudly Jewish, but not exactly Zionist.” Despite his views on Israel, Sherr said he never considered not attending the rally. “I don’t have to agree with everything,” he said.

Across the street from the rally, counterprotesters from Neturei Karta—a fringe ultra-Orthodox anti-Zionist group—chanted “Judaism, yes! Zionism, no! The state of Israel has got to go.”

Elisha Weisel told Moment that although the rally was billed as Zionist, it was first and foremost about combating antisemitism—not about Israel. “[Jews are getting] attacked at restaurants, or [having] firecrackers thrown in their direction on the streets. We think it’s something very real and being experienced today,” Wiesel said. “But it also encompasses what’s happening in the media, what’s happening around the world and what’s happening in Israel, when it somehow becomes okay in the popular imagination to root for a less strong Israel in the face of terrorist attacks.”

END_OF_DOCUMENT_TOKEN_TO_BE_REPLACED

Trayon White Is Running for DC Mayor. Has the City Forgiven His Antisemitic Comments?

END_OF_DOCUMENT_TOKEN_TO_BE_REPLACED

After Seeing My Synagogue Attacked, How Can I Reconcile Security With Openness?

Can we reconcile security with our Jewish values? How can we welcome prospective new members if we are afraid to open the door to anyone unknown?

END_OF_DOCUMENT_TOKEN_TO_BE_REPLACED

Dispatch from Colleyville: Making Sense of the Synagogue Attack

Colleyville has attained the type of fame it had never wished for. Now etched in American Jewish collective memory alongside Pittsburgh, PA and Poway, CA, the town has become yet another reminder of the dangers still facing Jews in America, and of the fact that these dangers are on the rise.

END_OF_DOCUMENT_TOKEN_TO_BE_REPLACED

White replacement theory, the repugnant racist trope that claims America’s white population is being displaced by people of color, is once again receiving a wide audience among those feeling malnourished by Donald Trump’s absence from their social media feeds.

END_OF_DOCUMENT_TOKEN_TO_BE_REPLACED

One thought on ““No Fear” Rally Against Antisemitism in D.C. Draws Over 2,500”