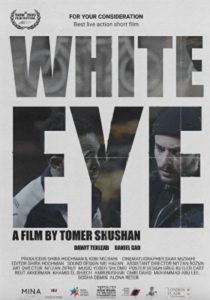 It is often said that less is more. Israel’s White Eye—one of five nominations in the “Best Live Action Short Film” category at this year’s Oscars— proves the point. Director Tomer Shushan’s 20-minute film packs a mighty punch, capturing the zeitgeist of 2020-2021 in the United States, Israel and around the world.

Based on what seems a perfectly straightforward incident—a man finding his stolen white bicycle on a street in the industrial area of south Tel Aviv—the storyline quickly moves from a perceived injustice to a tangled web of moral questions that prove far from easy to resolve.

The movie’s principal protagonist Omer Attias (played by Daniel Gad, well known from the 2017 TV series Shababnikim) calls the police and accuses Yunes, an illegal worker in the meat-packing factory close by (played by Eritrean Dawit Tekelaeb, an asylum seeker in real life ) of having stolen the bike. Yunes explains that he bought it for 250 shekels from someone in the Tel Aviv Central Bus Station in order to take his young daughter to and from school. 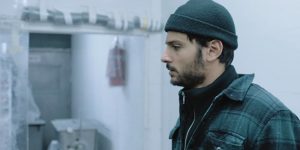 When the cops arrive, things rapidly escalate and Omer realizes that he has lost control. The film raises any number of questions about society’s and the police’s prejudiced treatment of non-white immigrants: the way in which a white person can unthinkingly demolish the life of a migrant, how disadvantaged African migrants are treated in Israel, the lack of empathy toward people seen as inferior, the desperation of refugees and a general unwillingness to listen to another’s story.

The film is made all the more intense by having been shot in a single take, using a camera able to turn 360 degrees. This technique allows the viewer to witness up close Omer’s dawning realization that he has inadvertently initiated a terrible sequence of events, thanks to his bone-headed, and perhaps racist, assumption of wrongdoing.

This is 33-year-old Tomer Shushan’s first independent movie after film school, and the history of its creation is personal. While on a bus in Tel Aviv, en route to deliver a film script on the final day for funding applications to Israeli film foundations, he spotted his own stolen bike and called the police, without ever stopping to listen to the supposed thief’s explanation. He said in an interview with Other Israel Film Festival, “I remember myself in the real story, confronting this guy. I didn’t have any time to understand that I’m doing something very, very, wrong.”

It was the lack of breathing space, and time to consider the ramifications of his actions, which prompted Shushan to shoot the story with no cuts, so that the audience could grasp the same emotions he felt. And, as he continued, “it was so intense and I was so overwhelmed by the story, I wrote the script in 40 minutes and sent it in.” Sure enough, he was granted funding and the result is this exploration of what he called “the difference between classes or layers of society.”

In order to remain true to his vision of authenticity, Shushan was determined to find a real refugee who wasn’t a professional actor to play the part of Eritrean asylum seeker, Yunes. (Indeed, every African character in the film is played by an immigrant, discovered by the director on the streets of Tel Aviv). Late one night he spotted Dawit Tekelaeb washing dishes in a hamburger restaurant and asked him if he would be interested in playing the part. Initially suspicious, Tekelaeb soon enthusiastically embraced the project—spending seven months learning to speak Hebrew. He saw the film as a wonderful opportunity to put his community’s perspective into the public domain and convey what life is like when one is classed as “illegal.” 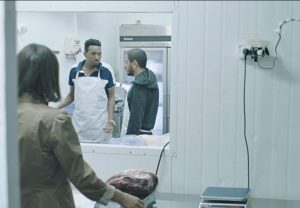 Winner of the Best Short Film Award at the Haifa International Film Festival in 2019 as well as the Grand Jury Award for Narrative Short Film at the 2020 SXSW Film Festival, White Eye has been selected for screening at more than 100 film festivals. Shushan believes this is in part due to the Black Lives Matter social movement, which has heightened awareness about racially motivated police brutality.

Any thoughtful person can today open a newspaper or watch a TV news or current affairs documentary and be confronted with the exact same moral dilemmas addressed in this thoughtful, multi-layered, movie. How someone retains their humanity is a universal question challenging us all, touching as it does on so many facets of life from racism, exploitative employment practices, unfair judicial rulings and downright cruelty.

Due to the requirements of filmmakers and distributors, the virtual viewing of some movies is limited to certain geographical areas. Restrictions vary, but it is worth searching each title on the internet. Most virtual films are only available for a limited time.