Keith Thomas’s new horror movie The Vigil centers around a night of shmirah, the act of guarding a dead body from the moment of death until burial. Serving as a shomer, a guard, is an unnerving task and one that seems ripe for the horror genre. “I couldn’t believe there had never been one” focused on a shomer, Thomas tells me over Zoom. Although perhaps it’s not so surprising considering the paucity of Jewish horror films out there. Even those with Jewish components usually use them more as gimmicks than as elements integral to the story. (Remember Matisyahu popping up as a dybbuk-fighting rabbi in The Possession.) With The Vigil, which is almost entirely in Yiddish and set in ultra-Orthodox Brooklyn, Thomas sets out to create a film “rooted in real Jewish experience and thought.” 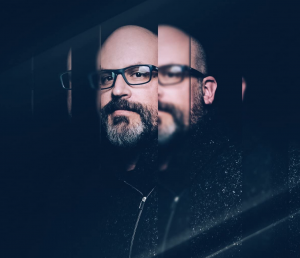 The shomer in question is Yakov Ronen (Dave Davis). When we meet him, he already looks haunted as he joins half a dozen people sitting around a dining room table. We quickly learn this is a support network for those who are leaving or have left the Orthodox community, and Yakov is a relatively new member. (This scene, says Thomas, was based on the ex-Orthodox support group Footsteps, and all the actors in the scene are Footsteps alum.) They aren’t there to discuss theology, but rather the oddities of living in a secular world. One woman marvels at the brazenness of someone hitting on her in the subway. Yakov explains how he brought a handwritten resume to a job interview. When he leaves, a man in ultra-Orthodox garb (Menashe’s Menashe Lustig) is waiting outside to ask him to serve as a shomer for the night. Yakov doesn’t want to step back into the world he is trying so hard to leave behind, but it’s a paying gig, and he is currently choosing between medication and meals because money is so tight. 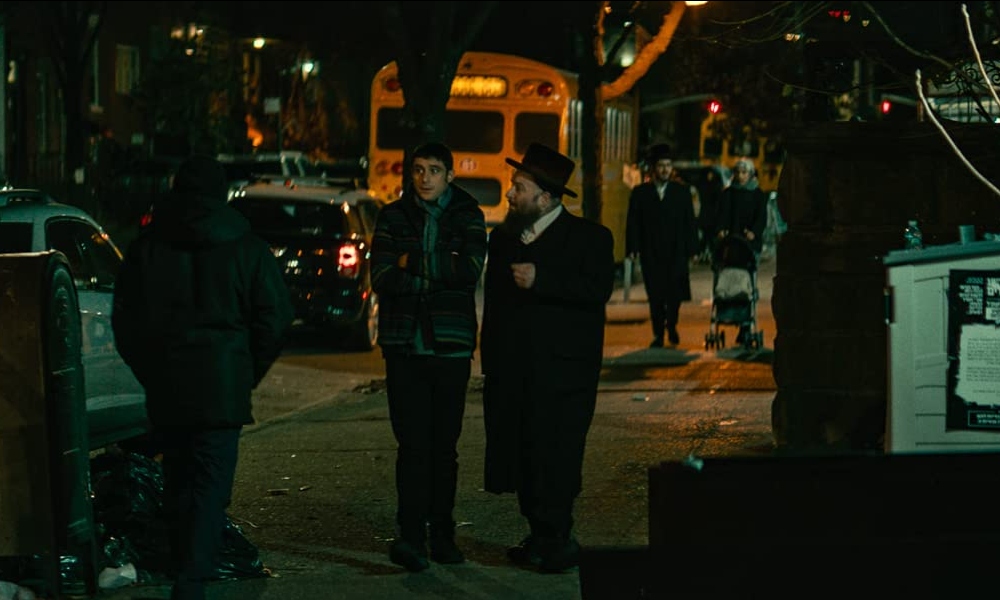 Dave Davis and Menashe Lustig in The Vigil

The dead body in need of a shomer is Reuben Litvak, a Holocaust survivor and recluse who Yakov learns was estranged from his family. As Yakov settles in for the night, strange and then terrifying things begin to occur: pulsating walls, mysterious phone calls, water turning to black ink. Yakov, who has alluded to a hospital stay in his past, thinks he might be having a mental breakdown.

Eventually, we learn the house is haunted by a mazzik, an evil force that is drawn to and inhabits the homes of those who have suffered a trauma. Mr. Litvak was haunted by his past actions, as is Yaakov, although we don’t find out why until later. This is a story about “both trauma to a community and a people—and a neighborhood, and then a block, and then a house, and then the person,” Thomas says.

Thomas calls a mazzik an “an obscure rabbinical kind of a demon.” It appears only a few times in Talmudic and rabbinic sources. “Mazzik means destroyer, and it is said to inhabit abandoned houses,” he says. “The only description in the rabbinic literature of the mazzik is that it’s in this house: ‘You shouldn’t go in the house because there might be a mazzik,’ and that’s pretty much it.” (In Yiddish slang today, mazzik is actually a term for a spoiled or bratty child.) Thomas, who graduated from Hebrew University College with a master’s degree in religious education and at one point considered joining the rabbinate, said the mazzik’s esotericism is what drew him to it. He wanted to avoid the Jewish supernatural creatures that usually appear in horror films such as golems and dybbuks. 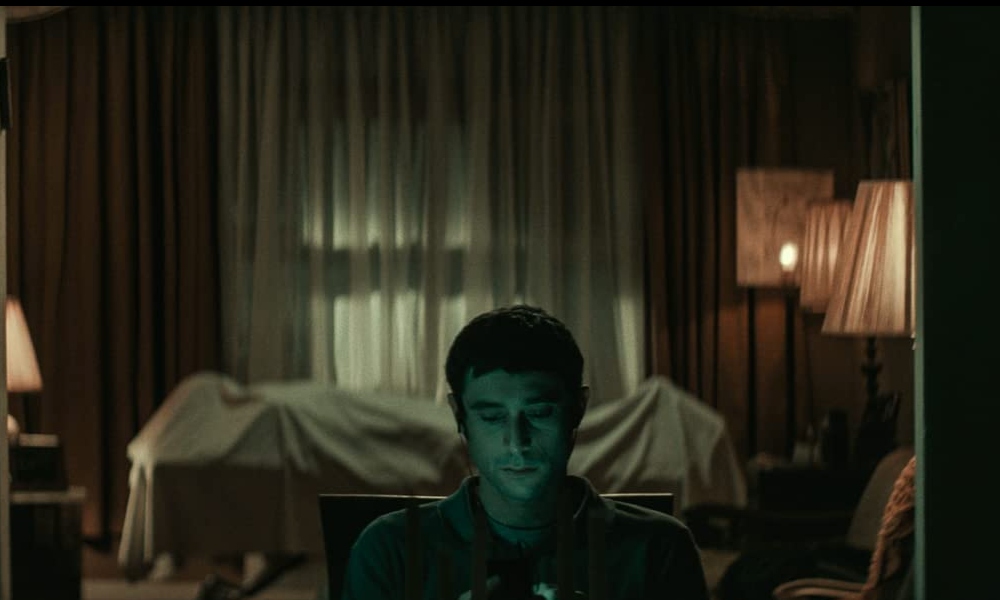 Dave Davis in The Vigil

He also wanted to make sure Judaism was a central aspect of the story and not merely a plot device. That’s one reason the movie is almost entirely in Yiddish, despite neither Thomas nor Davis speaking the language. Thomas worked with numerous consultants on the script, going back and forth to make sure everything was correct, including all the idioms. And while he feels confident in the end result, Thomas does say it added another level of complexity to the project. “While filming there was a translator there translating live the whole time,” he says. “Which means you’re now listening both for performance and also watching where we are in terms of the camera, the blocking, the lights. And then on top of that, you’re listening to the translation as it’s happening.”

Thomas was able to draw on the connections of his producers, who are modern Orthodox, and his cast and crew to gain entry into this often closed world. While shooting in Borough Park and Williamsburg, the crew always drew attention. “At one point in Williamsburg, we were surrounded by 200 Hasidic men at two in the morning. And it was just crazy to look up from the camera and see them all,” says Thomas. “First they wanted to know why we were there. We explained, ‘It’s a movie. It’s set in the community, and it’s not in any way denigrating the community.’ Once they understood that, they stood around and watched. They were just curious about how it was made.”

Is there an audience for a Yiddish horror film? Thomas is not worried about The Vigil’s mainstream appeal. “The tent’s gotten much bigger in the horror film world,” says Thomas. “And I think there’s a hunger out there for a lot more diverse, unique angles to the tropes of horror that we see.”

END_OF_DOCUMENT_TOKEN_TO_BE_REPLACED

One thought on “‘The Vigil’: Dark Night of the Soul”