It was 1968, just a few months after the end of the Six-Day War, when Avinoam Danin, the late professor of botany, embarked on an expedition to the Sinai Desert, the historic land recently taken by Israel from Egypt. Danin and his colleagues at the Hebrew University of Jerusalem noticed white drops on the green stem of a desert shrub. The plant, Haloxylon salicornicum, is found all over the Middle East. “We asked a passing Bedouin: ‘What is this?’” Danin wrote many years later in an article published on the website Flora of Israel Online. The Bedouin responded: “This is mann-Rimth that you ate when you left Egypt.” The Rimth shrub is the Bedouin name for the Haloxylon salicornicum. Was this the answer, Danin wondered, to a thousands-years-old mystery about the miraculous food from heaven that sustained the people of Israel on their way to the promised land?

Natif is a nougat-like candy using manna as the main ingredient. Read the recipe here.

Manna is first mentioned in the Bible in Exodus 16 when the Israelites, wandering the Sinai Desert after leaving Egypt, begin complaining to Moses about the shortage of food. God promises Moses to “rain bread from heaven” to feed the people. “In the morning there was a layer of dew round about the camp. And when the layer of dew was gone up, behold upon the face of the wilderness a fine, scale-like thing, fine as the hoar-frost on the ground.” The Israelites asked “What is it?” or “Mann hou?” in ancient Hebrew, and that was the origin of the name manna (mann in modern Hebrew). In the same chapter, manna is described as “like coriander seed, white; and the taste of it was like wafers made with honey.”

Manna came with its own user manual. People were instructed to gather exactly as much as they needed every day and never to save it, as the precious food would spoil. Manna would appear six days a week, and on Friday they were instructed to gather twice as much—since there would be no manna coming down on Saturday, the day of rest. The extra portion for Shabbat, the Israelites were promised, would not spoil.

Manna also appears in the New Testament and the Quran. Persian medieval writings on the Quran, as well as a medicine book by the 10th-11th- century Persian scholar Al Biruni, didn’t mention Haloxylon salicornicum but say manna was the sweet drops that formed on the tamarisk tree, which is common in the Sinai Peninsula as well as in what today is Iraq and Iran. Manna from the tamarisk tree was called taranjabin (Tar-angabin) manna, which means “wet honey” in Farsi. 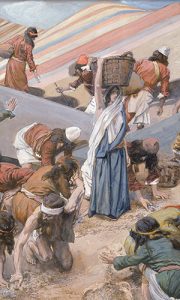 The Gathering of the Manna, James Tissot, 1902.

A 16th-century document written by Pierre Belon, a French traveler and naturalist, uses the same name to describe the manna he encountered at St. Catharine’s monastery in Sinai. For Danin, the modern-day Israeli researcher, this was a turning point. Learning that the term “manna” was used by medieval Iranians, and that it was carried to Sinai by a French scholar, led him to realize that the Bedouins might not have learned about manna from their ancestors who had met Moses and his flock crossing through the desert three and a half millennia ago. It was more likely that they heard the story of manna later.

But although we cannot be certain which plant produced the “bread from heaven” that the Jewish people ate on their journey, we do know that “manna” is still harvested and used in parts of Iran and Iraq. The word refers to either sweet sap of any plant (tree or bush) that appears in the region or the secretion from insects that feed on trees such as the tamarisk. Modern chefs in the United States have also begun to experiment with it. Recently, chef Todd Gray of Manna restaurant in the Museum of the Bible in Washington, DC used manna imported from Iran as a delicate garnish. Still, this is rare, since sanctions on Iran make it almost impossible to import.

If you visit Iraq, you can try mann al-sama (manna from heaven, or in Arabic, from the sky), a chewy, white, nougat-like confection spiced with cardamom and mixed with nuts. Traditionally, it was prepared with manna gathered beneath the tamarisk trees, which is naturally mixed with leaves and impurities from the ground. It is cleaned by boiling and straining through a sieve and then shaped into balls. According to Nawal Nasrallah’s Delights from the Garden of Eden, the time-consuming task of making mann al-sama was the specialty of Jewish confectioners in Baghdad, who called it baba kadrasi. These days, the candy is rarely made with manna but is prepared instead with a more readily available and affordable mixture of sugar and egg whites.

As for the Bible’s double portion (lechem mishneh) of manna on Friday, the one large enough to last for two days, no one has yet found a scientific explanation. It did, however, give birth to a beautiful Jewish tradition, which first appeared in the Babylonian Talmud, of reciting the Hamotzi blessing over two challah loaves on Shabbat.

In her 2003 cookbook Delights from the Garden of Eden, Nawal Nasrallah quotes a recipe she found in a 1950s cookbook for a nougat-like candy called natif using manna as the main ingredient. The recipe, meant for professional candy makers, assumes readers have collected the manna themselves and instructs them on how to clean out the dirt and twigs. The recipe is interesting to read, but nearly impossible to follow.

1. Soak the manna in hot water overnight to help it dissolve. Strain it through fine cheesecloth and then put it on low heat, in a very big pot.

2. Add 25 eggs and stir. The mixture will be clear in about 30-45 minutes. Strain it again. All the soil and dirt will be removed with the help of the coagulated eggs.

3. Return manna to heat, bring it to a boil, and then add the whites of the remaining 75 eggs. Stir constantly over low heat until manna becomes a light-colored paste, five to six hours. It is ready when the spoon is lifted from the pan and the manna adhering to it breaks off. Immediately fold in the toasted almonds.

4. When the manna is cool enough to handle, form it into flat cakes or balls about two-inches in diameter. Roll each piece in flour.

5. When completely cooled off, layer the pieces in tins or small wooden boxes with plenty of confectioners sugar between the pieces.

END_OF_DOCUMENT_TOKEN_TO_BE_REPLACED

26 thoughts on “Manna Is Real and Not So Heavenly”