Judy Chicago always wanted to be an artist. “From the time I was a child,” she writes in her 2021 autobiography, The Flowering, “I had a burning desire to make art.” By her own account, she started to draw when she was barely talking. A preschool teacher praised her as gifted and at the age of five, the future artist started riding a bus across town on her own to take lessons at the Chicago Art Institute.

One of the key forces behind the 1970s feminist art movement, the colorful and often controversial Chicago, a self-styled “troublemaker,” was thrust into the spotlight with her landmark 1979 installation “The Dinner Party,” a tribute to women’s contributions to history using vulval and butterfly imagery as its motif. Though lambasted by critics and marginalized for years by the male-dominated art establishment, Chicago persisted.

Now San Francisco’s de Young Museum is celebrating the groundbreaking artist by mounting the first retrospective of her work. On view through January 9, 2022, the exhibition presents an ambitious overview of Chicago’s six-decade career, tracking the artist’s evolution and charting her unique creative process, sometimes working alone, other times in collaboration with her husband, photographer Donald Woodman, colleagues or volunteers. Featuring more than 125 paintings, drawings, ceramic sculptures and prints, as well as several films, the exhibition brings together a representative selection drawn from every phase of her diverse oeuvre—from her early work with the California Light and Space Movement in the 1960s to her most recent body of work, an intense look at mortality, extinction and environmental devastation.

Highlights include works or studies from “The Dinner Party,” “The Birth Project,” “The Holocaust Project” and “Atmospheres”—the artist’s site-specific smoke performances that produce ephemeral airborne fields of color. 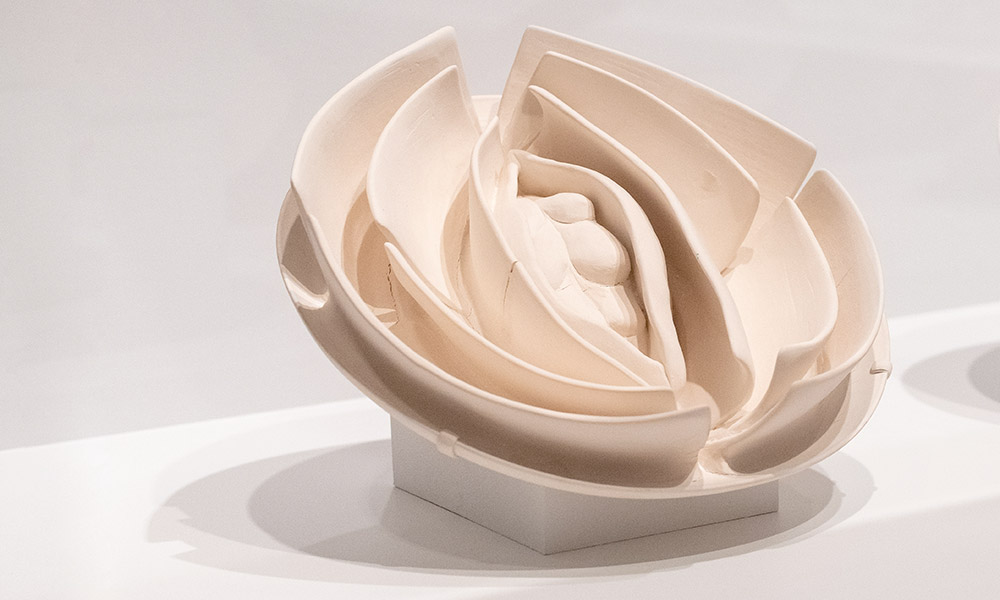 The show includes sketchbooks, journals and preparatory drawings that document the extensive research behind her work. It also brings attention to the surprising range of mediums she employs, often ones such as embroidery, needlework and china painting that were viewed as women’s crafts and therefore traditionally excluded from the official canon of art history. Early in her career, Chicago enrolled in an auto-body school, the only woman among some 250 men, to learn how to spray acrylic paint on metal. Employing this new skill, she created a bold series of painted car hoods in the 1960s that merged this macho technique with biomorphic forms replete with sexual innuendo.

Born Judith Sylvia Cohen in 1939, the artist grew up in a liberal, politically conscious, secular Jewish home in Chicago, Illinois. Her father, whom she adored and who died when she was 13, was a labor organizer and Marxist who was investigated in the early days of McCarthyism for his political beliefs. Her mother, a former dancer, worked as an administrative assistant and later as a medical secretary. A brother, Ben, was born when Judy was five-and-a-half years old. When she was 17, Judy took off for California to attend UCLA, where she majored in art and minored in philosophy. She struggled with the then-male-dominated art scene in LA, but graduated with an MFA in 1964. 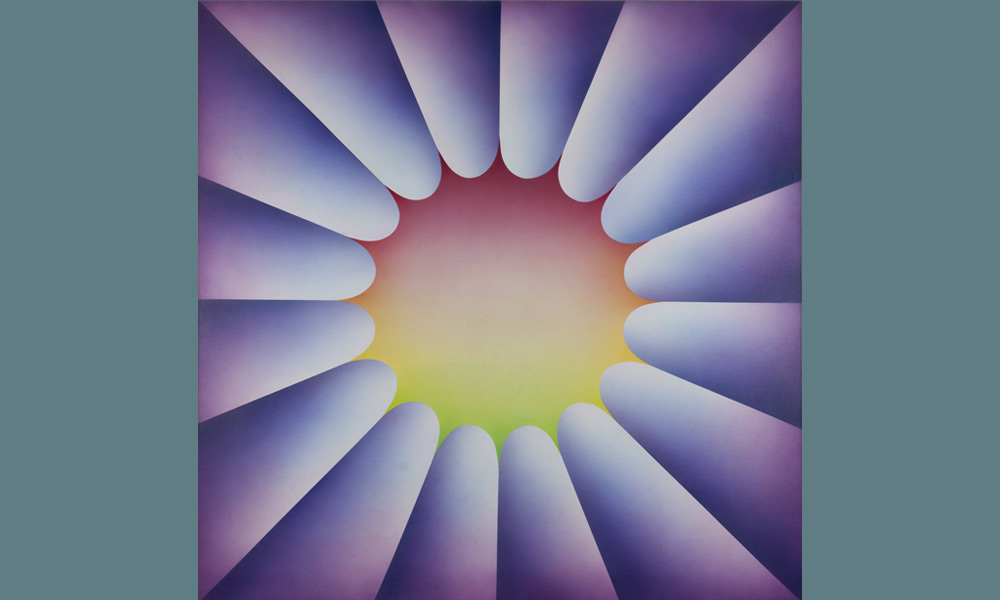 “The Birth Project” was Chicago’s direct response to the absence of imagery related to birthing, one of the most fundamental female experiences. As with “The Dinner Party,” she relied on the help of collaborators, creating the 80-plus works in the series with the assistance of female volunteers from all over the United States, Canada and New Zealand. The painted and needleworked images vividly illustrate creation and the process of giving birth. Chicago first became interested in the subject when she was working on a piece for “The Dinner Party” commemorating English writer and philosopher Mary Wollstonecraft, who wrote a revolutionary book on the rights of women in 1792, only to die from a postpartum infection after giving birth.

Although Chicago’s father was descended from generations of rabbis, he had, according to Chicago, “a very complicated relationship with his Jewish history.” Growing up in a secular home, the artist knew little about her religion or the Holocaust, but after her 1985 marriage to Woodman, who is also Jewish, she became interested in exploring her heritage.

During the eight years of research for their first collaboration, “The Holocaust Project: From Darkness to Light,” the couple traveled through Europe, searched archives, viewed videotaped histories of survivors and connected with leaders of Jewish groups, ultimately creating a haunting and powerful body of art. In the retrospective, the project is represented by “The Fall,” an 18-foot-wide modified Aubusson tapestry, and “Rainbow Shabbat,” a monumental work of stained glass. 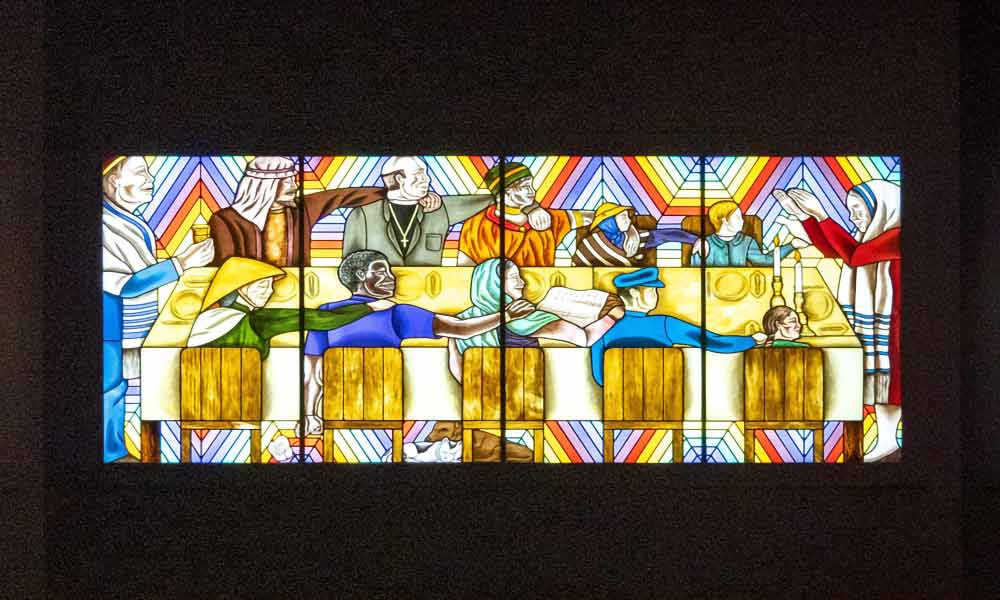 Based on the Friday night Jewish Sabbath dinner, “Rainbow Shabbat” bears the following inscription in both English and Yiddish: “Heal those broken souls who have no peace and lead us all from darkness into light.” Chicago studied the complex method of working in stained glass to prepare for this project.“In ‘Rainbow Shabbat,’ which is an image of diversity—a table of people of the world,” she explains on the show’s audio tour, “all heads turn to the woman, because I believe women represent an untapped reservoir of hope, action, the ability to collaborate and empathize—a number of qualities that we desperately need at this moment in history.”

Chicago has always had a firm belief in art’s power to change the world. “But whether art can change the course we’re on as human beings,” she says,“I don’t know. I don’t know if we can change course before it’s too late, but the Jewish mandate is: ‘Choose hope.’ And so I choose hope.”

Back in October 1970, Judy Gerowitz (the artist was then using her first husband’s last name) took out a full-page ad in Artforum to announce that she was divesting herself of all names imposed upon her through male social dominance. Henceforth, she would be Judy Chicago. That same year she founded the first feminist art education program in the United States at California State University, Fresno, followed by the program’s second iteration at the California Institute of the Arts in Santa Clarita.

To this day, Judy Chicago’s art is activist in its foundations, says exhibition organizer Claudia Schmuckli. “It is driven by the need and desire for social justice…Today, the aspects of her work that once relegated her to the sidelines of critical and scholarly appreciation appear visionary.”

After “The Dinner Party,” says Chicago, “I basically had the whole art world arrayed against me. So what did I have? I had nothing but the power of my art, and my belief in art history that, eventually, my work would emerge.”