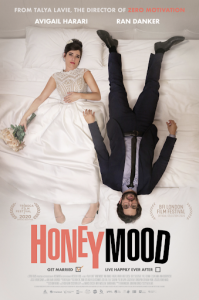 The chuppah ceremony and wedding reception are over. A handsome husband and his beautiful bride are ensconced in the plush royal suite of the Waldorf Astoria hotel overlooking the holy city of Jerusalem. Flowers, gifts and cookies abound. The young couple is wildly in love; what could possibly go wrong? (Well, as it happens, plenty!)

In Honeymood, director Talya Lavie (whose film Zero Motivation won Best Narrative Feature and the Nora Ephron Prize at the 2014 Tribeca Film Festival, as well as six Ophir Awards, known as the Israeli Oscars) makes piercing observations about fraught relationships, family tensions, marital doubts, lingering affections for past loves and the challenges of long-term partnerships. Thrown into the mix is a mysterious ring with a sensitive past best kept secret—which, of course, it would not remain.

In the opening minutes, Eleanor (Avigail Harari) discovers that Noam (Ran Danker), her “perfect” new husband, is in possession of a ring with a tiny compass on it. It was given to him, seemingly as a wedding gift in a sealed envelope, by Renana (Yael Folman), his former girlfriend. Though she has no idea of the ring’s significance or history, Eleanor is convinced that her marriage will “start with a curse” if the ring is not immediately returned to Renana. At 1:30 a.m., with single-minded belief in her mission, the highly-strung Eleanor drags Noam on a madcap journey across Jerusalem to track down Renana. The night’s (mis)adventures have just begun. 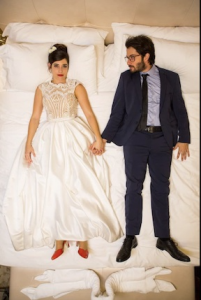 Along the way we meet an eclectic collection of “night people”—including a superstitious taxi driver with a heartrending story, street cleaners and Eleanor’s former boyfriend Michael (Elisha Banai), now a student in his third year editing his thesis film; does she still have feelings for him and he for her? Eleanor comes across a group of wildly-partying students from the high school where she teaches, and Noam encounters a highly emotional surgical nurse who claims to be a transplant coordinator. Thrown into the mix are Renana’s identical twin sister, six hunky security guards on duty at the prime minister’s residence, as well as Noam’s interfering and opinionated parents, Shmuel and Ruthie.

While Noam remonstrates with Eleanor to “drop all these quirks and obsessions” and “be reasonable,” she retorts that these very characteristics are what made her become a “drama teacher instead of an actress.” And a drama queen she most certainly is. Noam’s father advises his son: “You know what they say. If you’re into drama, buy a ticket to the theater!” 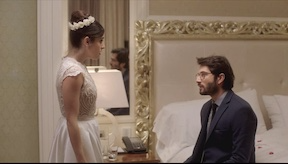 These kinds of quips abound in Lavie’s script, which has some wonderfully acerbic dialogue, particularly between Noam and his overbearing Jewish parents, who make no pretense that they would have much preferred him to marry Renana. Although he broke up with Renana more than a year ago, it is her photo, rather than Eleanor’s, which is stuck on his parents’ refrigerator door. When he tells them that it should be taken down, quick as a flash Ruthie retorts: “Your nanas are up there too, and they’re dead!”

Cinematographer Yaron Scharf has lovingly captured the sights and sounds of the city of Jerusalem at night, as well as those who work and party through the hours of darkness.

Lavie wanted to explore the topics of commitment and second thoughts, she said in an interview for the Gershman Philadelphia Jewish Film Festival late last year. “In romantic comedies, marriage is always presented as the solution to all problems. It made me wonder what happens after the happy ending.”

As dawn arrives, will the ring be successfully returned to Renana? Will the newlyweds make peace? Will they be able to discover what true love is and whether they can learn to tolerate each other’s eccentricities? Will Noam reveal the secret history of the ring he never wanted Eleanor to know about?  If you want to know the answers, then there’s only one way to find out.

After more than a year in which lighthearted comedy has been largely absent, Honeymood offers a welcome relief.

Due to the requirements of filmmakers and distributors, the virtual viewing of some movies is limited to certain geographical areas. Restrictions vary, but it is worth checking each title on the internet. Most virtual films are only available for a few days.