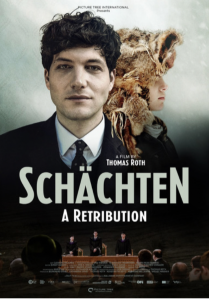 It’s 1962. Former SS officer Kurt Gogl, Nazi commandant of the Mauthausen concentration camp, responsible for thousands of killings as well as for having personally shot a six-year-old child in front of her parents, is a respectable headmaster on gloriously scenic Lake Wolfgang, in Austria.

This is the starting point for the recently released drama, Schächten – A Retribution, written and directed by Thomas Roth (Tatort, The Inspector and the Sea, Trautmann, Falco: Damn It, We’re Still Alive!). Schächten (in Hebrew, shechita, meaning to slaughter) denotes ritual kosher animal, slaughter in which the throat of an unanesthetized animal is cut with a knife. The image of a slaughterer’s knife is a leitmotif throughout. The film embraces, as Roth puts it, “themes of law, justice and revenge.”

Although most of the characters and events are fictional, the idea for the story came from a young Jewish film producer from Munich, whose family originally hailed from Vienna. This producer asked Roth if he would be interested in exploring the lives of Viennese Jews post-1945.

Twenty-something Jewish businessman Victor Dessauer, played by Israeli-German actor Jeff Wilbusch (Keep Breathing, Dawn Breaks Behind the Eyes, Oslo, Unorthodox), survived the war as a young child by living alone in the snowy forests after his grandparents, mother and 6-year-old sister all perished in the Holocaust. When Victor meets Nazi hunter Simon Wiesenthal (a real figure), depicted by Christian Berkel (Furia, Beat), he learns how Austria has forged a national collective memory of victimhood and rehabilitated perpetrators. Lawyers, teachers, judges, police and entrepreneurs all live freely under assumed names, while government bureaucrats cover up old sins and create new ones.

Paulus Manker (The People vs. Fritz Bauer, Tatort) does an excellent job as the villainous, corpulent, self-justifying Gogl. Although Gogl is prosecuted for war crimes, the jury found him not guilty on all charges despite harrowing eye-witness testimony, including from Paul Dessauer (Victor’s father), played by Michael Abendroth.

With a searing sense of injustice, and his father gravely ill in hospital, Victor decides to take matters into his own hands. Thrown into the mix is a Mossad agent sent from Israel to protect the Jewish community and Victor’s best friend, Arie Oppenheim, and all the ingredients are in place for a gripping thriller. Those who seek revenge are pitted against others who feel the law has run its course, albeit with a deeply unsatisfactory outcome.

With antisemitism rife throughout society, Anna Stöger, Victor’s Catholic girlfriend, played by Miriam Fussenegger, is an all-too-rare beacon of hope. She sees the world very differently from her parents. When she asks her father what he did during the war, he excuses himself by saying that he served on the front, and that he had no choice. Still an unreformed antisemite, he bans her from continuing her relationship with Victor.

Gogl’s wife Hermine (Julia Stemberger) confronts Victor, spits at him and calls him a “dirty Jew” while Gogl’s Nazi friends make derogatory jokes about Jews. Even the press seem indifferent to the crimes committed during the Holocaust, with one reporter asking Wiesenthal, “Who actually benefits from such court proceedings?”

Inevitably questions of morality arise—whether vengeance is justified, no matter what, or as Wiesenthal tells Victor: “Violence is like a weed. It never dies, not even in the fiercest drought…violence has to be nipped in the bud. Once a weed sprawls, it can spread everywhere in no time.”

Roth says he wanted to explore the notion that history sets the context for the present. “I wanted to capture his awakening and confrontation with this Nazi past, which became characteristic for Victor’s generation and opened the door for a spirit of a wider rebellion that painfully changed society, while being inseparable from the present. Much of this story radiates into our present society and how quickly the cycle of hatred can re-emerge in all of us.”

As the net closes in on Gogl we are treated to an exquisitely woven psychological drama set in the stunningly beautiful snow-covered Austrian countryside.

A Wide Open Conversation with Ken Burns and Michael Krasny