The Sassoons: The Great Global Merchants and the Making of an Empire
By Joseph Sassoon
Pantheon, 432 pp., $35.00

The Sassoons were Baghdadi Jewish merchants whose patriarch fled an autocratic Ottoman governor, first to Iran and then, in 1832, to Bombay (today’s Mumbai). From there, the family traded mostly in cotton and opium. They acquired immense wealth in the 19th century. In the 20th century, they largely forsook the making of new millions and turned to ostentatiously spending the old ones, often in the company of nobles, royals and racehorses of comparably exalted lineage.

The family’s story is a panoramic tale of globalization, a process they epitomized, and it is related in The Sassoons thanks to a letter that the author, historian and political scientist Joseph Sassoon received at Oxford from a stranger also named Joseph Sassoon, of Kirkcudbright, Scotland. The latter Joseph Sassoon wondered if they were related (they were, very distantly) and ultimately shared genealogical information, family stories and photographs. Joseph Sassoon the scholar and author, who knew he was distantly kin to the millionaire Sassoons, went to work researching the family.

He had the advantage of knowing three languages that figure in family archives: Arabic, Hebrew and Baghdadi Jewish—a dialect of Arabic written in Hebrew characters. The latter language was crucial to the Sassoons’ story because, so long as they could marry and hire from within the extended family or, failing that, from within the Jewish community of Baghdad, Baghdadi Jewish was the language of their international business ventures. In competition with other firms for information on the best prices for chests of opium or bales and bolts of cotton, having a private company language didn’t hurt.

The family’s story is a panoramic tale of globalization.

The most interesting character in this story is the family patriarch David Sassoon, who dispatched his sons to posts as far-flung as Shanghai, Hong Kong, London and Manchester. He was born in 1792, and his business benefited from the Opium Wars, which forced China to open its ports to foreign merchants of the narcotic. As the author notes, opium was legal at the time in England and the United States; the cause of temperance would pick up in the late 19th century and succeed only in the 20th. David Sassoon & Co. also benefited from the American Civil War, which disrupted the American cotton trade and added huge market value to Indian cotton (prices fell on rumors of peace across the Atlantic).

David Sassoon introduced the company practice of setting aside 2.5 percent of every transaction for charity. He was the leader of Bombay’s Iraqi Jewish community and a benefactor of its institutions as well as some that served the city’s population as a whole. He adapted early to such innovations as the steamship and telegraphy. He entertained lavishly but worked intensely.

For his enthusiastic and material support of the Western Powers in the Opium Wars, in 1853 David was ceremoniously awarded the prize that would ultimately redefine his family: British citizenship. Sassoon (the author) writes of the patriarch’s odd link to the United Kingdom:

Twenty years after his arrival in Bombay, he still had not learned enough English to sign his own name. [His oath of allegiance to Britain] was signed in Hebrew.

Despite his identification with the British and loyalty to their Empire, even when he began to attend ceremonies where British officials lauded his generosity, he invariably replied in his native Arabic.

A tall man, ramrod straight in his caftan and turban, David Sassoon looked the very model of an Oriental merchant prince. It did not matter that he would have appeared out of place in Victorian London, as he never set foot in the country to which he now pledged allegiance. When the British suppressed an Indian rebellion in 1857, he offered the services of “the whole Hebrew community” (of Bombay) to the imperial cause and encouraged others to do likewise. While the uprising and its suppression strengthened a nascent Indian nationalism, Sassoon’s opposition hardened into firm support of imperial rule.

All this added up to a highly political and commercial notion of national identity. He spoke and dressed like a gentleman of the Ottoman Baghdad he had abandoned decades earlier. He used a language spoken only there and by Baghdadi Jewish emigres. He was a pious Jew and student of the Talmud and obviously identified as Jewish, but he seemed to have little to do with the older community of often darker-skinned Jews who had settled on India’s western coast. And while his family went on to support religious institutions in Palestine, they opposed Zionism. 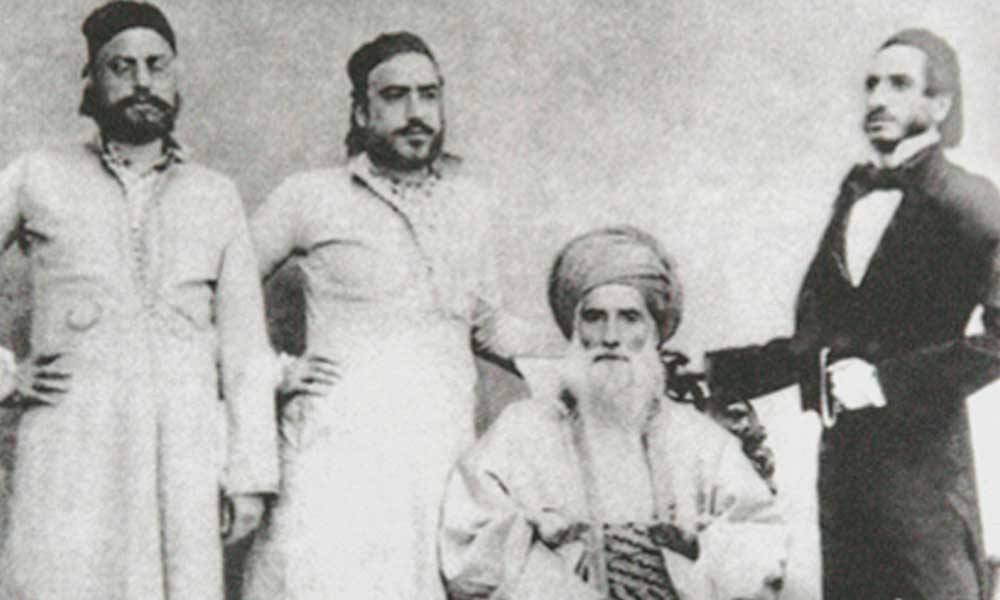 He was not so much a citizen of the United Kingdom as a creature of its Empire, and if David Sassoon’s “Englishness” was a transactional version of the real thing, his sons went about correcting that. Abdallah, his eldest son and successor, Anglicized his name to Albert, and after such noteworthy accomplishments as building the Sassoon docks that are still vital to Mumbai’s economy, he settled in England, where he became fast friends with the Prince of Wales, son of Queen Victoria and soon to be King Edward VII. He was made a baronet, a hereditary title, and after his death his brothers Reuben and Arthur (born Abraham Shalom) maintained the association and became absorbed in English high society.

As Jews, they were not always entirely welcome there. The book quotes a member of the Crown Prince’s social circle, the Countess of Warwick, who recalled resenting the presence of Jews among them, not because they didn’t like them, “but because they had brains and understood finance. As a class, we did not like brains. As for money, our only understanding of it lay in the spending, not the making of it.”

The Sassoon progeny may never have assuaged the Countess’s aversion to brains, but they did manage to abandon their knack for moneymaking. English Sassoons raised Derby-winning horses and held seats in Parliament. One became chairman of Britain’s National Gallery. Rachel Beer, a granddaughter of David Sassoon, edited The Observer and The Sunday Times in the 1890s, no small feat, and is credited with a huge scoop in the Dreyfus affair that confirmed the French army captain’s innocence.

David Sassoon’s great-grandson Siegfried, born to a Christian mother (the marriage led the family to cut off Siegfried’s parents), became one of Britain’s fabled war poets, an eager officer at the outset of World War I who was so revolted by the carnage he witnessed that he became a pacifist. In later life, he converted from Protestantism to Catholicism.

“Commerce fell by the wayside,” writes Joseph Sassoon, who observes by way of contrast that Marcus Samuel, the founder of Shell Oil, was also a Jewish immigrant to Britain who “wanted a peerage, a prominent role in politics, a country house, and the finest education for his children, and he obtained all of them” while not squandering the family’s valuable stake in Shell in the course of Anglicizing. Among the Sassoons, the allure of commerce diminished with the generations and culminated in a less providential collision with war than those that had enriched the patriarch: Family real estate holdings in Shanghai were seized when the Chinese Communists took over the city. Perhaps one can cut the 20th-century Sassoons some slack for their neglect of commerce given the prominence that opium had played in their family’s wealth. When calls for its prohibition mounted, the family, like others in the trade, had belittled the drug’s negative effects, comparing them to those of alcohol. It was not a noble performance. Perhaps it was just as well they got on with their own real-life pipe dreams of luxurious lives among the British upper classes.