Beshert | From Longing to Belonging

Seeing the first smile on my ten-day-old daughter’s face and observing her daily development, I was convinced of God’s presence. Science could not explain the emergence of her soul. Although I’d grown up in a secular Jewish family, at that moment I became determined to pass on the legacy of Judaism to her.

As an obese child growing up in Brooklyn, I was both a social outcast and an outsider to the Jewish community. I longed to connect to the transcendent. An older sibling lectured me on the superiority of atheism. My family provided few religious resources; rather, a sort of nationalistic pride and chicken soup.  I was jealous of the children in my neighborhood who exuded something special in their dress-up clothes going to synagogue with their parents on Shabbos.

As a young adult, I dragged my Jewish, religiously disinterested husband with me to every synagogue on the Upper West Side of Manhattan. Nothing fit. Not knowing Hebrew or any rituals left me feeling like an outsider again. I looked out of our apartment window at the synagogue across the street year after year, longing to be a part of the crowd and for something indescribable.

As soon as my daughter was eligible, I sent her to afternoon Hebrew school. Simultaneously, I took adult education classes at neighborhood synagogues. One of my teachers helped me understand that God is a presence in my life that could be whatever I wanted: a source of comfort, moral conscience, and inspiration to be the best person I can possibly be.

When my son was born a few years later, my commitment to creating a Jewish home became a passion. He went to a Jewish nursery school. We joined a congregation renowned for its music and progressivism. I admired and wanted to emulate my rabbis. But how?  I had no Jewish education. Although I got a job with and for Jews at an institute, I still craved deeper connection.

Then one morning, I brought my son to nursery school and spotted a flier for The Academy for Jewish Religion, a pluralistic rabbinic seminary focused on second career adults. I picked up the flier, something I rarely do. I called the Dean. We spoke for an hour. She encouraged me to study Hebrew and to apply the next year. With a leap of faith, that is exactly what I did. I finally found what I had longed for all my life.

Five years later, in May, 1997, I cried my way through my ordination. Today, I teach at Manhattan’s Marlene Meyerson JCC, the Mussar Institute and privately. I love my students – what fulfillment! Simply because I noticed a flier on a table.

That beshert glance out of the corner of my eye changed my life. I now belong to the synagogue across the street. 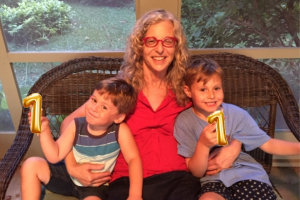 Besides her teaching, Rabbi Judith Edelstein provides spiritual counseling, prepares students for conversion and serves as High Holiday rabbi of Nantucket, MA. She has been a pulpit rabbi and chaplain and worked for synagogues, long term care facilities and Jewish organizations. Before being ordained, she was a public school English teacher and college professor. She holds a BA and MA in English and Creative Writing from City College of New York and is currently writing a book about aging. She lives with her husband, Jim Meier, in Manhattan.

Ask the Rabbis | Can Jews Married to Non-Jews be Considered Spiritual Leaders in the Jewish Community?

Why not? Moses was not such a bad spiritual leader of our people, and he was married to Tziporah the Midianite.

END_OF_DOCUMENT_TOKEN_TO_BE_REPLACED

Ask the Rabbis | Does Jewish Law Offer Guidance on How to Fight a War?

Before engaging an enemy in combat, we must offer to negotiate a peace (Deuteronomy 20:10).

END_OF_DOCUMENT_TOKEN_TO_BE_REPLACED

Ask the Rabbis | Is Political Compromise a Jewish Virtue?

That’s how Abraham resolves his dispute with Lot over grazing lands: “If you head left, I’ll head right. If you head right, I’ll go left” (Genesis 13:9).

END_OF_DOCUMENT_TOKEN_TO_BE_REPLACED

Ask the Rabbis | How Do You Deal With People in Your Community Who Don’t Want to Get Vaccinated?

I don’t. It is not my place to nudge people to get or not to get vaccinated.

END_OF_DOCUMENT_TOKEN_TO_BE_REPLACED

Ask the Rabbis | How Can We Avoid the Trap of Self-Righteousness?

Everyone wants to be right—in the right way. What’s the line between striving for moral perfection and being a jerk?

END_OF_DOCUMENT_TOKEN_TO_BE_REPLACED

Ask the Rabbis | Does Absolute Evil Exist, and If So, What Does It Look Like Today?

END_OF_DOCUMENT_TOKEN_TO_BE_REPLACED

Ask the Rabbis | Post-Pandemic, What Elements of Virtual Judaism Will We Keep?

In 2018, as synagogues pondered livestreaming some services for the convenience of infirm relatives, we asked the rabbis to contemplate what was surely a distant, speculative future: “What role should virtual presence play in Jewish ritual and community?”

END_OF_DOCUMENT_TOKEN_TO_BE_REPLACED

Some issues dominate the news; others drift along under the radar. This is literally true of electronic surveillance, a worldwide and quickly growing force that could profoundly change our lives.

END_OF_DOCUMENT_TOKEN_TO_BE_REPLACED

Ask the Rabbis | Should Jews Support Reparations for African Americans?

Our team of rabbis weighs in.

END_OF_DOCUMENT_TOKEN_TO_BE_REPLACED

Ask the Rabbis | Do People Become More Jewish as They Get Older?

We asked our team of rabbis to weigh in.

END_OF_DOCUMENT_TOKEN_TO_BE_REPLACED

Ask the Rabbis | Should Dirty Money Be Returned?

The ethics of using “dirty money” has been a topic of conversation in Jewish circles for millennia.

END_OF_DOCUMENT_TOKEN_TO_BE_REPLACED

One thought on “Beshert | From Longing to Belonging”