Ask the Rabbis | What Does Kneeling Mean to Jews? 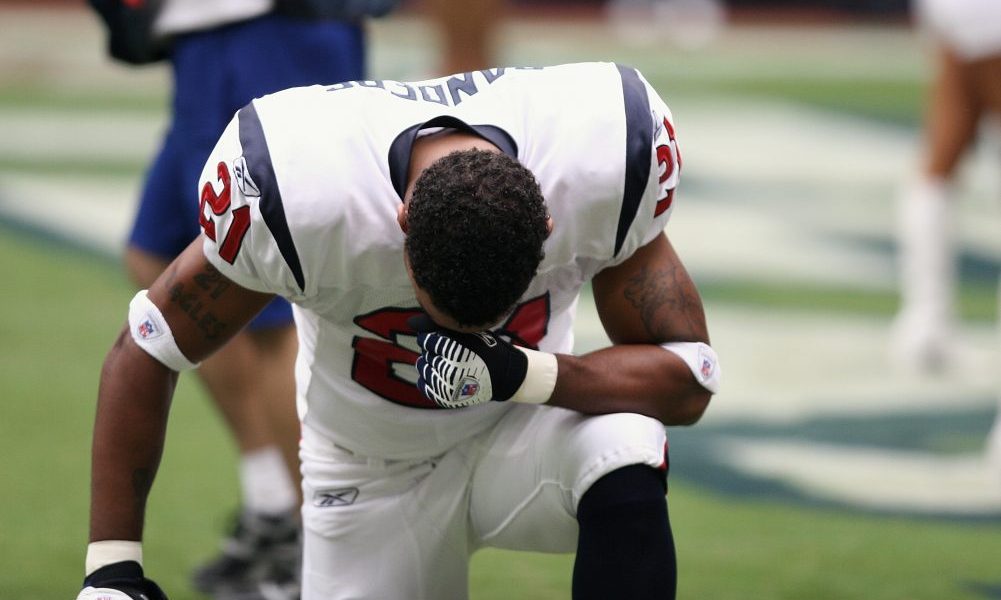 Ask the Rabbis | What Does Kneeling Mean to Jews?

All this week, images of kneeling NFL players and owners have dominated social media, along with argument and discussion—some fierce, some reflective—over what the gesture really means. By coincidence, this is happening smack in the middle of the High Holidays, the one time of year when Jews—for whom kneeling is not common ritual practice—do so in many synagogues at certain highly charged moments.

Maybe because of the confluence, Jewish discussions over the NFL protests cover some extra ground. What’s the significance of kneeling, anyway? How did it come to be seen by some as an act of disrespect? Do the protests first launched by Colin Kaepernick, who chose to “take a knee” during the singing of the national anthem as a protest against police brutality, show respect or disrespect for the flag and his fellow Americans? If they are offensive, then how and to whom?

On the eve of Yom Kippur, we asked three rabbis about kneeling and what it means to Jews.

Jews knelt in the Temple. The reason we don’t kneel now is that we don’t want to equate anything with that. In fact, if a Jew kneels on a marble floor for some reason, he’s supposed to put a cloth or some other barrier between himself and the floor. Some people say one should do this even on a wood floor, but we don’t require that in Chabad.

We kneel several times as part of the service on Yom Kippur, and once on Rosh Hashana, because that’s when it was done in Temple times. When we kneel, we also do prostration, with our heads even touching the floor, which is a total nullification of self, something you’d do in the ancient world before a great king.

At all other times, in place of kneeling, we instead bend the knee slightly and bow the head. Bowing the head shows we are before someone worthy of reverence. The head is the most important part of the body—it’s what contains our essence, and we can’t live without it. The first person to bow before God was Adam: As soon as he was created, all the animals thought he was their master and creator, and he said, “Let us all go together and bow before God who created us.” As for bending the knee, standing upright is a sign of human stature, so we break that when we bow, to show that we are standing before something more important than ourselves.

Judaism is an embodied practice: As the People of the Book, we tend to think of ourselves as living in our heads​, but a lot of ritual involves experiencing things through the body. We eat matzah to celebrate freedom, sit in the sukkah to remind ourselves of fragility, go to the mikveh to mark transitions. ​Using our body to designate an emotion—or to ​propel ourselves toward that emotion—is very Jewish. In services, we bow all the time, and that’s to show our submission to something greater than ourselves, to everything we don’t understand in the world.

I gave some thought to whether this year at Yom Kippur, during the Great Aleinu—when, at our Sixth and I service, many people kneel and prostrate themselves, not just the rabbi and the cantor—whether I should encourage people to kneel instead as a way to connect to the football players who are “taking a knee.”

​The players also are using embodied practice to make a statement.

But then it occurred to me that the football players are doing the exact opposite of what we do. They’re kneeling in order to ​build power, while we kneel in order to give power away, to show our submission to God​. ​They’re equally important, but not analogous. ​As an American I feel proud and connected to this protest because it embodies something fundamental ​we value about America, our right to ​speak out. And as a Jew I feel connected to it because so often in history we, too, had ​to find our own subversive ways to speak truth to power.

When I look at images of the players doing this, I think, “What an incredibly respectful thing for them to do.” Kneeling is part of many religious traditions; if anything, it seems an even more respectful gesture of commitment to the country than standing for the anthem. I know there has been some discussion of whether Jews in synagogue on Yom Kippur might consider going down on one knee during the Great Aleinu, instead of all the way down, as a gesture of solidarity. I don’t have any strong opinions on this. In my congregation, we are devoting the martyrology section of the service to martyrs of the civil rights movement as a reminder of the ongoing history of racial violence in this country—and the need to stand in solidarity with the African American community and work for imminent change.

Our Jewish tradition of kneeling and prostrating on the High Holidays is mostly done in the context of the Great Aleinu. I like to focus on the first word—Aleinu means “It is up to us.” And it really is up to us l’taken olam b’malchut Shadai—to repair the world the way God would want it. So kneeling and bowing in that context is a statement that holiness, the worship of God and responsibility for fixing this world are all intertwined. Which we have always known.

In our “Ask the Rabbis” series, we ask a group of rabbis—from across the denominational spectrum—to answer a question. For over a decade, our team of rabbis has debated everything from religion to politics to to modern life. Read more here.