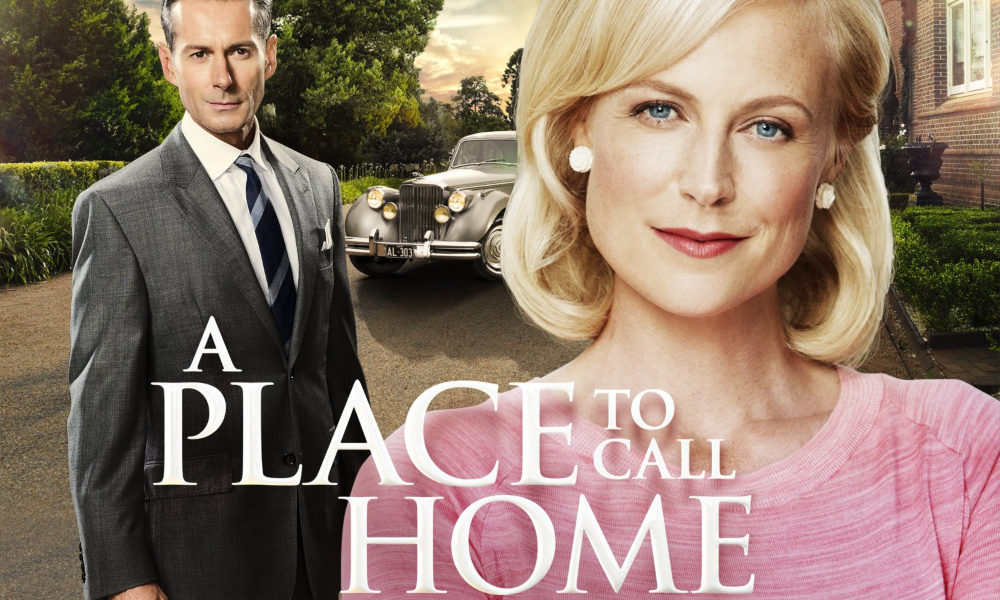 During these days of enforced isolation, almost any phone or email conversation sooner or later gets around to the same question: What are you streaming? As time passes, there’s a never-ending search for undiscovered, overlooked, binge-worthy gems, as various new and marquee series such as Netflix’s Unorthodox play out.

A Place to Call Home is just such a series, featuring an engaging Jewish character—a middle-aged woman named Sarah who could have been ordered directly from Amazon’s Heroine catalog. She is strong, brave, left-wing and beautiful, and takes no guff from anyone–all without superpowers, which is important since Warner Bros. has just delayed the release of Wonder Woman 1984.

My wife and I discovered A Place to Call Home through a call from an old friend. Set in the fictional country town of Inverness, Australia, in the 1950s and 1960s, the series ran for six seasons, from 2013-2019, ultimately airing in more than 100 countries. Cancelled once, it was revived due to fan demand.

When the show first aired in the U.S. in 2014, The New York Times called it “the poster child for binge-watching—it’s almost impossible to stop once you’ve started.” Dorothy Rabinowitz hailed it in the Wall Street Journal as an “instantly irresistible saga.” Moment readers are likely to find that its 67 episodes (currently on Acorn TV, and also available on Amazon Prime and some PBS stations) will provide welcome sustained relief from isolation.

The series’ central character is Sarah Adams, born Bridget Adams, a nurse and a convert to Judaism. After two traumatic decades in Europe, the tall, blond beauty returns home to Sydney in 1953 to visit her ailing, estranged mother, who wanted her to be a nun. The reconciliation fails, sending Sarah to Inverness’s small hospital, which is supported by the Bligh family, local landed gentry.

Adams has a past: She served on the leftist, Republican side in the Spanish Civil War, where she met Rene, her future husband. Rene was a Jew, a doctor and a friend of the poet Federico Garcia Lorca. Later, in Rene’s native Paris, Bridget converted in order to marry him, taking the first name Sarah, and donning a jacket with a yellow Jewish star. Both were arrested by the Nazis in 1942, before the infamous roundup of all Jews in Paris that became known as the “Rafle du Vélodrome d’Hiver.” Sarah nearly escaped to Spain, but returned to Paris to fight in the Resistance before she was arrested again. Rene was reportedly killed in Dachau. Sarah survived two years of great personal suffering in Ravensbruck, the notorious women’s concentration camp known as a deadly destination for Resistance fighters.

All of this background unfolds, partly in flashback, mostly during the first season. In the seasons that follow, the story focuses on how Sarah battles her way into Inverness’s straitlaced, provincial society. In the post-World War II period, when the Western world’s notions about class and gender roles seemed to be evolving, Sarah struggles with both the large and petty prejudices of the period, including anti-Semitism, homophobia and anti-immigrant feeling.

At one point, Sarah befriends the town’s lone Jewish family, European refugees named Goldberg (who shorten their name to Gold), surprising them by speaking Yiddish, and sharing several Shabbat dinners and one Hanukkah night at their table. Later, in a  moving episode entitled “Kaddish,” a minyan has to be imported from Sydney for a Jewish funeral in Inverness.

Summoned to her devout mother’s deathbed, Sarah pretends to be returning to the family’s Catholic faith, crossing herself and reciting the Rosary. But after the priest administers the Last Rites, she lights a candle and recites the Kaddish over the body. Later, she uses a local creek as a makeshift mikveh on the day before Yom Kippur, and asks forgiveness for those in the town she may have hurt. In a later episode she visits Israel.

“The Judaism on display in this series is a Judaism that honors its rituals and conveys a powerful message about its relationship with God,” wrote Donna Robinson Divine, an emeritus professor of Jewish studies and government at Smith College, in The Times of Israel.

“Sarah’s Judaism stakes an even broader claim for universal meaning that gives [the series] its emotional power and philosophical depth,” Divine continued. “Her Judaism springs from an ongoing dialogue she seems to have with God.”

A Place To Call Home, she concluded, “has something important to say to Jews.”

One of those things is not to be afraid to confront anti-Semitism, whether genteel or malignant.

At one point, a snooty friend of the Blighs, who shares the series’ narrative center stage with Sarah, learns that Sarah is a convert to Judaism. It was appalling enough to be born a Jew, she exclaims, “but to choose it!”

“Love brought Sarah to Judaism,” Divine wrote, “and Judaism enabled Sarah to grow up, learn languages, engage in battle, and form an identity that lived more dangerously and looked more deeply into abysses than most people could imagine.”

There is also a scheming, deviously poisonous, anti-Semitic character named Regina. She tries to sabotage Sarah’s romance with George Bligh, the scion of the Bligh family. Part of Regina’s motivation is jealousy; as the sister of George’s late first wife, she wants him for herself. But her antipathy is further explained when it is revealed that her own late husband, a British diplomat in Mandatory Palestine, was killed in the Jewish resistance movement’s bombing of Jerusalem’s King David Hotel, which housed the British administrative headquarters.

In a later season, a bigoted local police sergeant, reflecting the Red Scare political atmosphere of the time in Australia, calls Sarah a “Commie Yid.”

Sarah replies, “I am Jewish and my politics are left-wing, and I’m proud of both.” (In the 1950s, Communist Party members in the West were ordered not to acknowledge their affiliation). In the same episode, Sarah loses her job as a volunteer substitute teacher, when she tells an elementary student that his minister was wrong, the Jews did not kill Jesus.

Writing in the Journal six years ago, Rabinowitz seemed to anticipate the series’ second life in the coronavirus world: “It’s the kind of series that could pose problems for the guilt-ridden, burdened by feelings of worthlessness and general spiritual malaise after gorging nonstop on a whole season’s streamed episodes,” she wrote. “A Place to Call Home is roughly what the title suggests—a captivatingly filmed, deeply romantic drama of immense intelligence distinguished by a uniformly superb cast.”

Sarah is played by Marta Dusseldorp, who may be familiar to American viewers as the journalist girlfriend of the title character in “Jack Irish,” and later as the prosecutor star of “Janet King,” both Australian productions.

Dusseldorp, who is active as a goodwill ambassador for the UN Refugee Agency, explained to the website TV Today in 2016 that she put a lot into preparing to play both a convert to Judaism and then a Holocaust survivor.

“My sister is married to a Jewish man and I spoke with him and his whole family, and the wife of his brother who converted. I spoke with her about what that meant for her and how she did that and what that did for her afterward…” She added, “ I watched Shoah for hours and hours. I visited the Holocaust Museum in Sydney. I noticed one thing about all the survivors. They were all so poised and dignified and they never ever speak of themselves as victims. They are survivors and they wanted to bear witness to the people who didn’t make it.”

When A Place to Call Home aired in Australia, it was largely embraced by Jewish viewers, among the country’s community of 124,000, such as Jill Rabinowitz (no relation to Dorothy), a retired high school English teacher in the western city of Perth.

“The Jewish themes were well received by Jewish viewers,” she said. “I found the character of Sarah believable and sincere, and the rituals she observes were tastefully recreated. I felt proud that the heroine of such a popular show was Jewish, especially because she was a convert and didn’t renounce her new religion even in the harshest of circumstances. Her heart and soul had become truly Jewish, and this was successfully conveyed to the audience as we watched and empathized with her actions, her inner dialogue, her spirituality and her consistent loyalty to her religious beliefs.”

The colorful Australian Diaspora, of which Rabinowitz is a part, is an eclectic amalgam that began with Jewish gangsters, petty thieves, pickpockets and sex workers, arriving on the first convict ships from England to Botany Bay in 1789. Over the next 231 years Jews arrived as adventurous gold miners, refugees from European pogroms and survivors of the Holocaust.

A Place Called Home is by no means perfect, or even television high art. I felt that over time the series devolves into an overly sentimental, rather soapy, melodramatic series of romances, with echoes of a smaller-budget Downton Abbey. My wife—A Jew by choice, and also named Sarah, who wept at all the appropriate junctures–sharply differs with me on this point and put it simply: “I was captivated by Sarah– her bravery, her commitment to caring for her patients, her warmth and humanity. Despite discrimination, she consistently and openly practiced her faith.”

Susan Knobler, of Delray Beach, Florida, the high school friend who recommended the show to me agrees. “Sure, it’s a soap, but it’s well written, well acted she says. Plus, “the down-under accents are the best.”