The earliest Jewish tribes, inhabitants of the arid lands of Canaan, Phoenicia and Palestine, developed the first known Jewish prayer space, the tentlike tabernacle. A rectangular area with the holy scrolls of the Torah at its center, the tabernacle became, over centuries, a prototype for later Jewish holy spaces.

The Greeks called these places sunagoge, or “an assembly.” Similarly, the Hebrew name, beit ha-knesset, means “house of assembly.” Foremost a place of worship, the synagogue is also a destination where generations of Jews gather to study, socialize and celebrate the rites of passage that have sustained them over the generations. As physical structures, synagogues also express a desire for permanence. 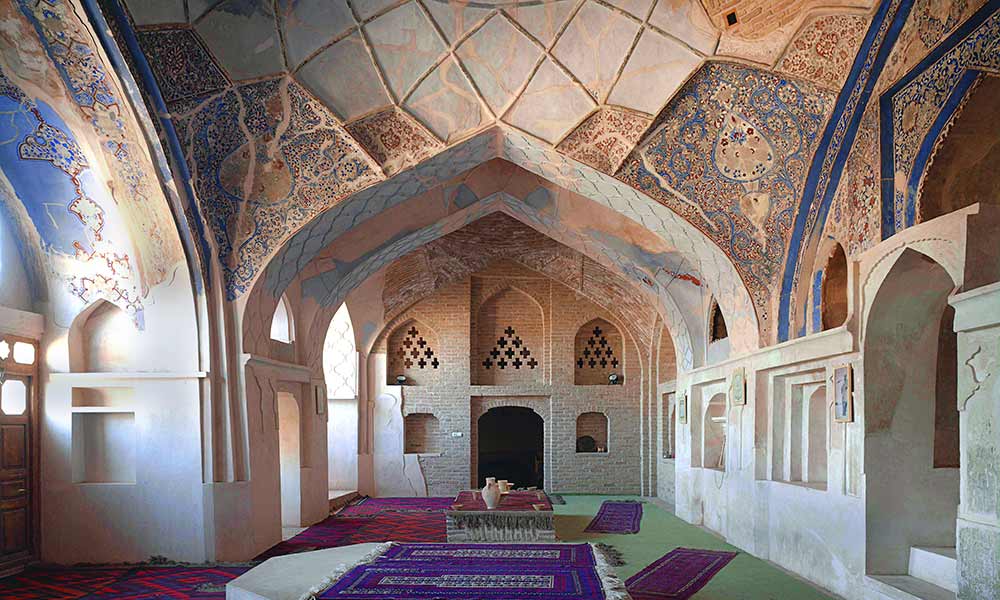 A number of Jewish merchants and leather artisans migrated from the Near East along the Silk Road, arriving in Afghanistan as early as the 7th century CE. The Yu Aw Synagogue in Herat was built in 1393 and restored in 2007. The main sanctuary centers on a chahartaq (four-arch) structure with painted floral medallions reminiscent of Safavid dynasty design (1501-1736). The mihrab-shaped niches and low bimah are traditional to the region, as are the rugs, which serve as seating. The design reflects the lives of Jews in a non-Jewish world. Local Islamic law prevented construction of new synagogues without the permission of local leaders, who wanted to ensure they didn’t compete with local mosques in size or ornamentation. (Photo credit: Images courtesy of SYNAGOGUES: Marvels of Judaism, by Leyla Uluhanli © Rizzoli New York, 2021; © Amit Geron; © Aga Khan Trust for Culture) 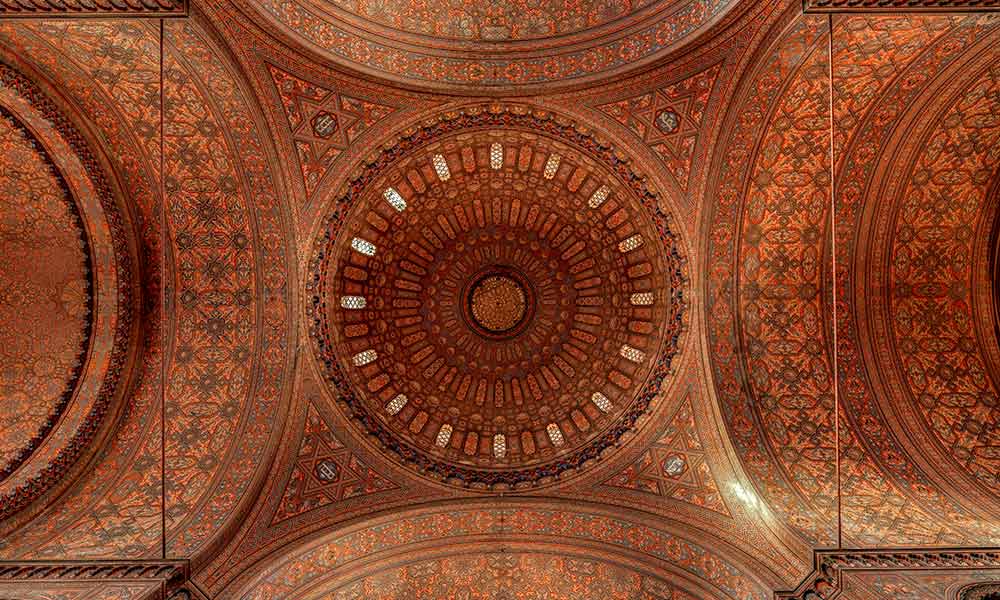 The interior of the dome (detail) of the Tempio Maggiore Israelitico in Florence reflects a taste for Moorish ornamentation. Illuminated by a ring of cylindrical windows, the dome’s rich geometry and arabesque designs are interwoven with Jewish symbols and inscriptions. Built from 1874 to 1882, the eclectic building was a collaboration of three Florentine architects and takes its inspiration from Byzantine and Ottoman architecture. The tall dome pays homage to Filippo Brunelleschi’s and the city‘s famed 15th-century Duomo. The interior follows the Greek Cross plan, with four equal arms and an elevated dome. (Photo credit: © Jakub Certowicz; © Massimo Listri)

According to 20th-century architectural historian Sir Nikolaus Pevsner, the function of religious buildings is to convert visitors into worshippers. It is the essence of architecture—space, light and materials—that nurtures that conversion. 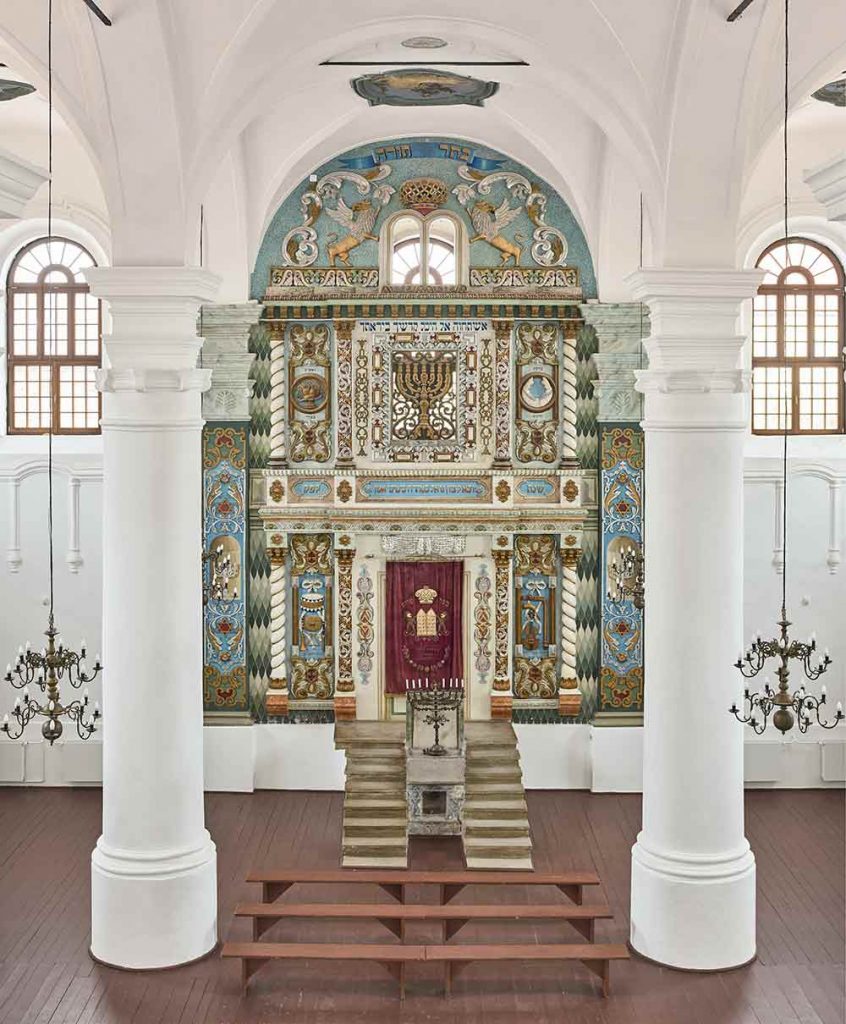 The intricately painted and gilded plaster Torah ark, which dates from 1936, is the centerpiece of the Great Synagogue of Wlodawa, Poland. Built in 1771, the synagogue was likely designed by Italian architect Paolo Antonio Fontano, who favored a grandiose Baroque style. By the mid-18th century, the prosperous Wlodawa Jewish community of 2,000 could afford this impressive structure. The building was restored in the 1970s-’80s. (Photo credit: © Jakub Certowicz; © Massimo Listri) 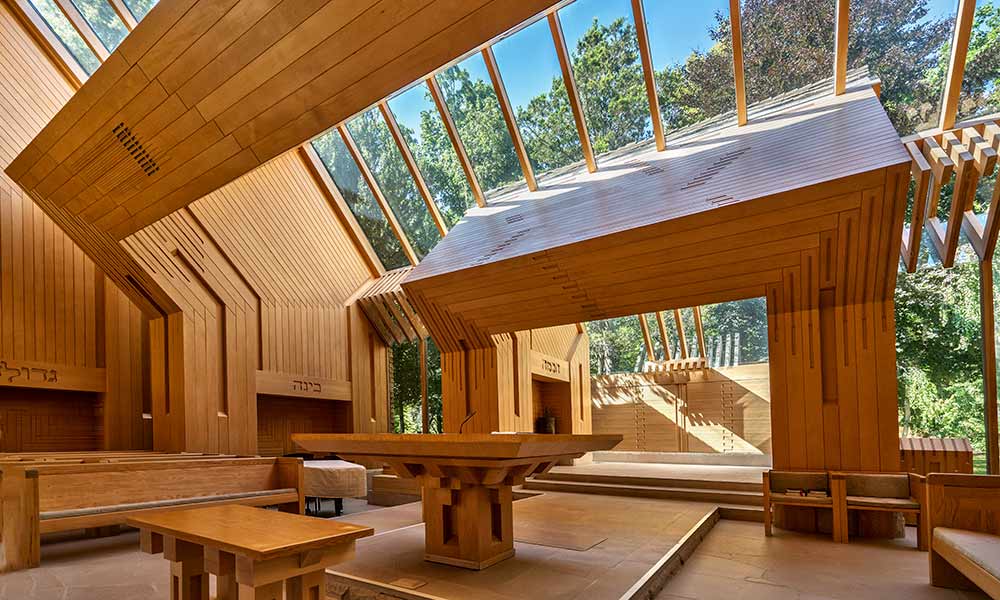 Set in a grove of indigenous trees and flooded with light, The Jewish Center of the Hamptons in East Hampton, New York was designed by architect Norman Jaffe in 1989. The angling of the woodwork into a series of bent forms was designed to evoke the profile of a worshiper bowing in prayer. The use of wood refers to the great wooden synagogues of Eastern Europe. In a departure from Reform Judaism, the bimah projects into the congregation to encourage a more participatory version of worship, a design typical of early Sephardi synagogues. (Photo credit: © Louis Davidson; © Tom Bonner)

Ever since the destruction of the Second Temple in 70 CE, Jews have found themselves spread throughout the globe. This diaspora led to new cultural and architectural forms as Jews interacted with their local communities. 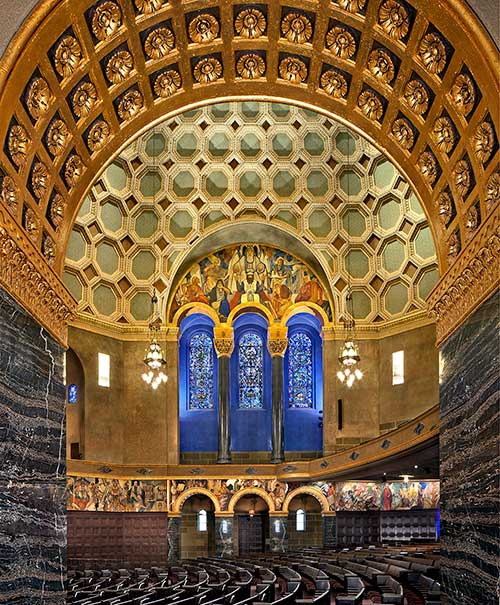 An impressive new volume pictures the architectural and historical evolution of more than 60 iconic synagogues around the world, from the most ancient to the most contemporary, the most modest to the most imposing. Published by Rizzoli New York, Synagogues: Marvels of Judaism, by Leyla Uluhanli, captures the richness and diversity of these structures across time and geography.

Opening image: The spiral-shaped exterior of the Scroll of Light Synagogue in Caesarea features controlled fissures that allow for interior illumination and encourage meditation on the role of light and the progression of time. The synagogue was built in the town of Caesarea on Israel’s Mediterranean coast in 2007. (Photo credit: Images courtesy of SYNAGOGUES: Marvels of Judaism, by Leyla Uluhanli © Rizzoli New York, 2021; © Amit Geron; © Aga Khan Trust for Culture )

END_OF_DOCUMENT_TOKEN_TO_BE_REPLACED

Facebook Twitter Pinterest linkedin Telegram
Much of the time, Israeli society is fractured by differences and resentments. Sometimes, we define ourselves more by whom we’re agains...