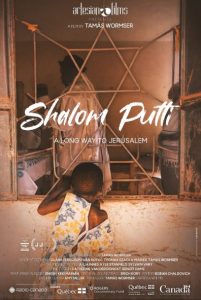 A community of observant Orthodox Jews in Uganda, with no genetic link to Israel, wants to make Aliyah. Tamás Wormser (Vie de Chateau, The Wandering Muse, Travelling Light: Artists on the Move) has devoted seven years to charting the lives of this extraordinary community of subsistence farmers, living on the edge of poverty, in a small village called Putti in rural eastern Uganda.

When we first meet them, the men are reading from the Torah and the synagogue congregation is singing, in Hebrew, “Am Yisrael Chai.”

The establishment of Judaism in Uganda has an astonishing history, originating in British colonial deceit. Semei Kakungulu was a warrior and tribal leader of Buganda who, during the 1880s, converted to Christianity under the tutelage of a Protestant missionary. The British, eager to bring the eastern part of the country under their rule, sought Kakungulu’s assistance to conquer two areas outside the Bugandan Empire (Bukedi and Busoga). Kakungulu believed he would become king of Bukedi and Busoga, but the British colonial rulers refused to grant him that title and chose, instead, to administer the areas through colonial civil servants.

Disillusioned with Christianity, which Kakungulu came to believe was not following the Bible accurately (he pointed to the fact that Jesus was buried on a Friday and Mary and the disciples did not visit the tomb on the Sabbath but waited until Sunday). In defiance of the British colonialist rulers, in 1919 he founded a Jewish community called the Abayudaya (People of Judah).

Initially, Kakungulu’s definition of Judaism was simply practicing circumcision and observing the Sabbath. In 1922, he published a 90-page book of rules and prayers to deepen the community’s understanding of the tenets and rituals of Judaism. Today that community numbers more than 2,000—of which about 250 live in Putti. 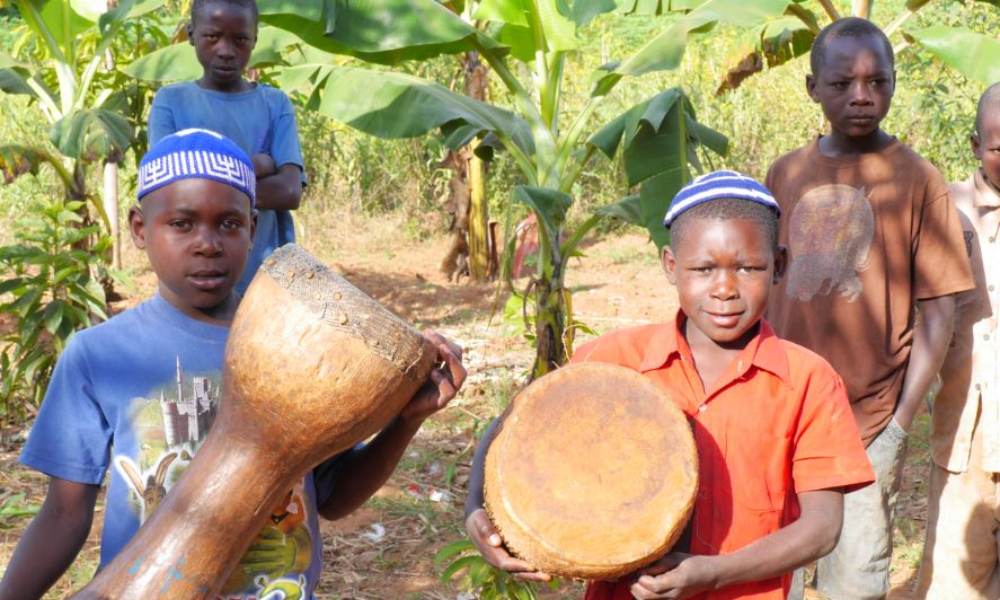 The history of Jews and Judaism in Uganda has not been smooth. In 1972, one year after Idi Amin, himself a Muslim, seized power and declared himself President of Uganda and Commander in Chief of the Armed Forces, he instigated a range of human rights abuses, including the expropriation of the Jewish population’s land and property. Championing the Palestinian cause and aligning himself with the Soviet Union and the Arab world, especially Libya, Amin adopted the view of Israelis as “the enemies of Muslims.”  He banned the practice of Judaism and ordered Israeli citizens to leave the country within 48 hours. Many Ugandan Jews converted to other religions.

As this engaging documentary vividly illustrates, Putti has synagogues, a working mikveh, mezuzahs affixed to the doorposts, menorahs, Stars of David, and Israeli flags. Their children attend the “Jonathan Netanyahu Memorial School” (named for Bibi Netanyahu’s late commando brother, killed during the Entebbe rescue mission). The inhabitants keep kosher, read Hebrew, sing Israeli songs, circumcise their sons, wear tzizit and kippot, observe Shabbat, Pesach, Yom Kippur, and are fully Jewish in their religious and daily lives. In 2002, about 400 members of Abayudaya were formally converted by a group of rabbis from the Masorti (Conservative) movement. These Abayudaya also have faced hurdles with Israel’s Interior Ministry, which said that they did not hail from “recognized Jewish communities.”

As elsewhere in the world, Ugandan Jews have faced antisemitism. Enosh Keki Mainah, leader of the Putti community, poignantly says, “Israel is always in my mind and in my heart” and relates how his mother and uncles were tormented at school by their classmates who called them “Jesus-killers.” Such prejudice led them to abandon their education. Many of those that did not convert, like Moshe Walyombe, Enosh’s cousin (whose Jewish father was a polygamist), had to give up their education on account of the actions of Idi Amin.  Shira Musenero (Enosh’s wife) sees their children’s future outside of Uganda, hoping they will make aliyah and become rabbis.

And yet, Israel does not recognize them.

Enter Rabbi Shlomo Riskin, formerly of Lincoln Square Synagogue on the Upper West Side of New York City and founding chief rabbi of Efrat, a settlement in the Israeli-occupied West Bank. Together with a team of fellow rabbis, the documentary shows him officiating at weddings in Uganda, constructing an eruv, laying teffilin, praying in the synagogue and eloquently stating his view that people who want to convert should be able to do so.

Riskin takes a lenient view on local customs. Benjamin Touke recounts how he was reluctant, at his pre-conversion interview, to lie to the rabbi about the fact that he has two wives. But Riskin was unconcerned, telling him that Abraham also had two wives and it was not a problem. “We are supposed to be a missionizing nation,” explains Riskin. “We were from the very beginning. Abraham was a missionary…the Bible itself, 36 times it tells us to love the convert.” 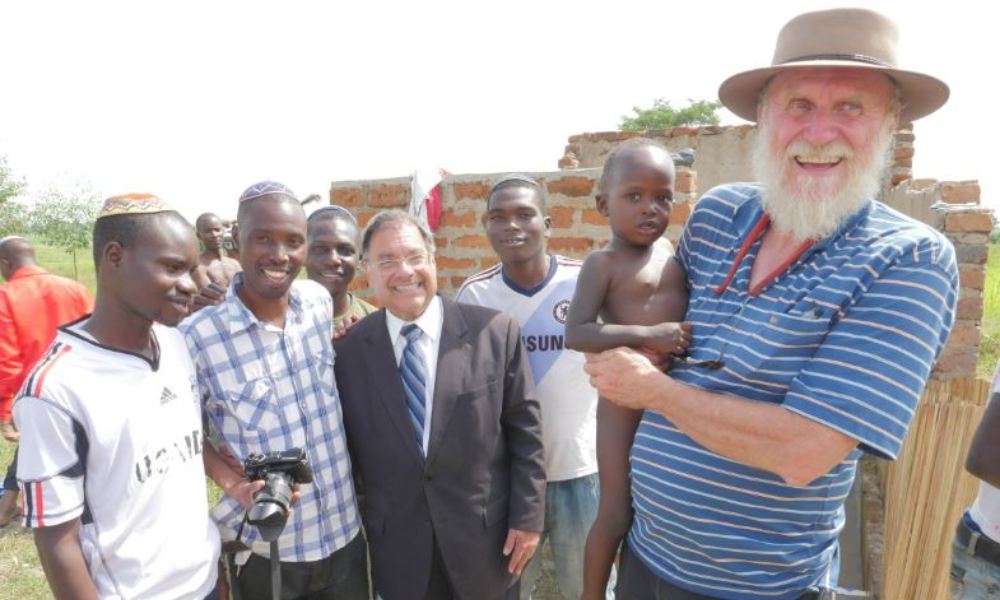 The visiting rabbis are filmed enthusiastically conducting group conversions of the population of Putti, but not everyone is as enamored. As one inhabitant explains, “We are already Jewish. Why do you say convert? We say if you want to recognize us, okay. So, they came and organized what they call conversion. But for us, we call it recognition.”

While the Jews of Putti want desperately to emigrate to Israel, that seems to some like a pipe dream. Riskin would like to see the entire community settled in the Negev, where they could be trained in modern farming practices. In 2016, the Jewish Agency acknowledged the Abayudaya as having the right to immigrate to Israel under the Law of Return. Yet the Interior Ministry, which has the ultimate say on who is deemed a legitimate Jew, is having none of it.

Riskin takes a jaundiced view of this stance stating: “Within the Israeli Foreign Affairs department there is racism and prejudice…the Interior Ministry more than anything else, and we have difficulty sometimes even getting them visas.”  Failure to be accepted officially as Jews means that members of the community are automatically barred from joining any government-sponsored trips, such as Birthright and Masa, which would enable them to connect with the wider Jewish world and learn more about Israel. Riskin is scathing in his criticism of the Israeli authorities: “The Jewish establishment, the religious establishment, the Chief Rabbinate has not quite caught up with the movement. To put it mildly.”

Rabbi Menachem Kuchar, who assists in the conversion program, adds that “There are many Africans that believe they’re descended from the 10 Tribes… there may be 50 million even.” Of course, if even a fraction of that number decided to follow in the footsteps of the Putti Jews, the challenge to Israel could be overwhelming. Perhaps fear of a potential avalanche of applications from Africa explains the Interior Ministry’s stance. A shortcoming of the film is the lack of an official perspective on this position.

Will the Israeli authorities soften their stance? It might be a long wait.

Meanwhile, Shalom Putti offers the opportunity to learn about this little-known community and the determined attempts of a few committed rabbis to gather them from the diaspora into Israel. Shot entirely in rural Uganda, the film introduces a charming array of interviewees, and witnesses Riskin ordaining Moshe Madoi Yashiirah (Enosh’s brother) as the country’s first Orthodox rabbi, whose rabbinical degree was granted in Israel. This visually rich film is accompanied by a delightful soundtrack of African songs and music sung and performed by the residents of Putti.

Riskin clearly loves this community: “One of the greatest gifts that God has given me, and us, and those of us who are involved, is the ability to know these people and to be able to bring these people into Judaism formally. Because they were Jews informally for 100 years.”

Due to the requirements of filmmakers and distributors, the virtual viewing of some movies is limited to certain geographical areas. Restrictions vary, but it is worth checking each title on the internet. Most virtual films are only available for a limited time.