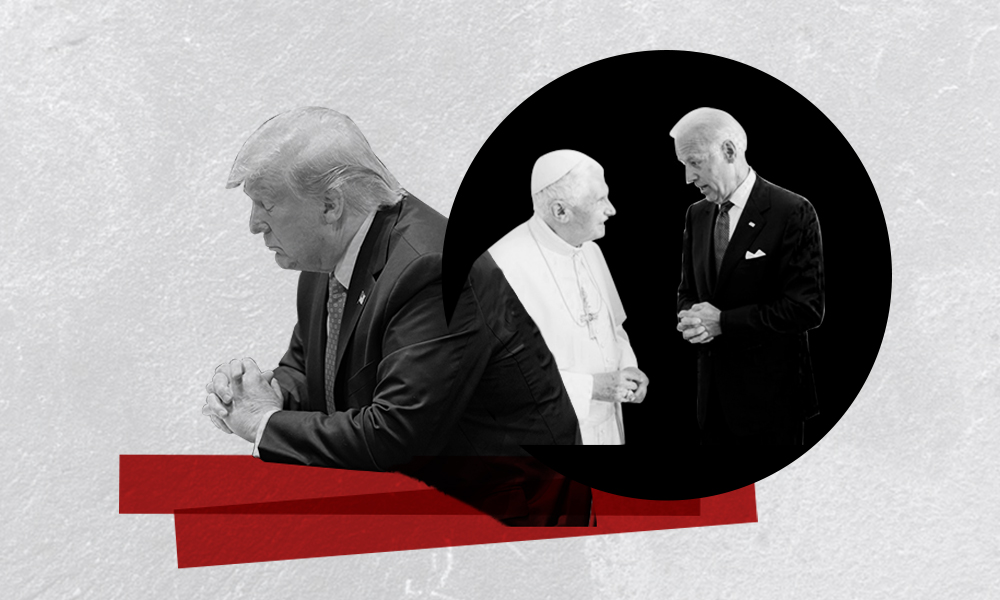 Sign up here to get Politics & Power delivered to your inbox every Monday.
For the duration of the summer, Politics & Power will be published every other week. Sign up for our newsletter to stay in the know!

1. Getting God on the campaign trail

We are 70 days away from the November 3 election, and it’s all hands on deck. Pollsters are polling, fundraisers are fundraising, canvassers are canvassing, and strategists are strategizing. And at times like this, no one is allowed to remain on the political sidelines, not even the almighty.

Over the weekend, Trump tweeted that “the Democrats took the word GOD out of the Pledge of Allegiance at the Democrat National Convention.” He later scaled back the argument, tweeting a video of one caucus meeting, in which the word “God” was omitted from the pledge.

The Democrats took the word GOD out of the Pledge of Allegiance at the Democrat National Convention. At first I thought they made a mistake, but it wasn’t. It was done on purpose. Remember Evangelical Christians, and ALL, this is where they are coming from-it’s done. Vote Nov 3!

Trump made no secret of who his message was intended for: “Remember Evangelical Christians, and ALL, this is where they are coming from-it’s done. Vote Nov 3.” Trump’s claim exceeded the usual Republican argument that relies on “values issues” such as abortion and church-state separation, putting Democrats at odds with Americans of faith. He is now going a step farther, arguing that Dems are “against God” and that the leader of this onslaught on God is no other than Joe Biden.

Democrats, naturally, pushed back, and given Biden’s strong and well-documented embrace of his Catholic beliefs, it wasn’t that hard. Here’s how actress Julia Louis-Dreyfus, who emceed the Democratic convention’s closing night, put it: “Joe Biden goes to church so regularly that he doesn’t even need tear gas and a bunch of federalized troops to get him there.” She was referring, of course, to Trump’s visit to St. John’s church across from the White House, which was preceded by a violent raid of federal troops on protesters outside the White House, only to allow Trump to pose for the cameras outside the church while holding a Bible—upside down.

Julia Louis-Dreyfus: “Joe Biden goes to church so regularly that he doesn’t even need tear gas and a bunch of federalized troops to get him get there.” #DemConvention pic.twitter.com/U2jlV1KQZx

Jewish voters usually feel a deep sense of unease when candidates talk about God in a political context. There wasn’t necessarily anything offensive to Jews in Trump’s attempt to drag God into the campaign, but the equation is pretty clear: If Democrats are against God, and most Jews are Democrats, then most Jews must be against God. And that’s not a place where anybody in the community wants to be.

2. It was all for the evangelicals

Even Trump’s harshest critics admit that he is probably the most transparent president America has seen in years. He makes his intentions and motivations clear and does not try to hide what he’s thinking. Sometimes to the point in which his listeners wonder: Did he just say that out loud?

Such was the case last week when in a campaign rally in Wisconsin, Trump went through the highlights of his presidency, including the relocation of the U.S. embassy in Israel to Jerusalem (which he mistakenly described: “we moved the capital of Israel to Jerusalem”). The next few words were telling:

“That’s for the evangelicals.”

Yes, he said it out loud. The historic move of recognizing Jerusalem as the capital of Israel and relocating the embassy was done to woo Christian evangelical voters.

Now, there’s nothing surprising about this comment—Trump has mentioned how well the decision was received by evangelicals—nor is there anything wrong in cashing in politically on a diplomatic move. But presenting the naked truth so clearly, underlined the transactional character of the move, and, to a certain extent, diminished the greatness of the moment.

“You know it’s amazing with that, the evangelicals are more excited about that than Jewish people. It’s really—right? It’s incredible,” Trump said

expressing astonishment at the diverging responses of Christian evangelicals and Jews, with a clear undertone of disappointment at the political ungratefulness of Jewish Americans.

3. Playing up the Israel card

This was not Trump’s only mention of his Jerusalem move on his campaign trail last week. As elections approach and with the Republican convention about to open, Trump has been speaking about Israel more frequently: the embassy, the Golan Heights, and his decision to withdraw from the Iran nuclear deal. Trump even surmised that he could “run in Israel, and I think they set up probably a 98 percent approval rating in Israel.”

And it’s not only Trump.

Secretary of State Mike Pompeo is scheduled to address the Republican convention Tuesday, from Jerusalem, where he will be on an official visit celebrating the recent American-brokered normalization deal between Israel and the United Arab Emirates. Delivering the speech from Jerusalem, which Democrats argue is a breach of protocol and use of government resources as a platform for political activity, is meant to send a clear message to the convention—that relations with Israel are among the top achievements of the Trump administration.

All the Israel-related issues raised by Trump are not only important milestones in America’s relationship with Israel, but also notable measures in the overall scorecard of his term.

But why raise them now?

The political dividend is multifaceted: It can help with the aforementioned evangelical voters, smooth relations with one reportedly angry Jewish mega-donor, serve as a reminder to national security-minded Republicans that despite their criticism of many of his views, they can all agree he has fulfilled their dreams vis-a-vis Israel, and—perhaps most important—it’s an easy way to win points against the Democrats.

Republicans now view Israel as the Achilles heel of the Democratic Party. They believe that the surge of Democratic progressive voices critical of Israel provides Trump with a chance to take advantage of this vulnerability and rebrand the GOP as the pro-Israel party. It doesn’t cost the Republicans any support from any of its constituencies and could help shore up voters and donors.

4. But Dems are closing ranks on Israel

The only problem with this Republican tactic is Joe Biden.

Biden effectively sidelined progressive voices on Israel in a series of subtle, but deliberate moves. He sought compromise with Bernie Sanders on many domestic issues, but did not budge on Israel; Biden’s representatives, with direct backing from the candidate himself, fought against any diversion from the pro-Israel line in the new party platform; and speakers critical of Israel were nowhere to see at the convention.

Dems will still carry the burden of having to explain to pro-Israel centrists the calls to condition aid, but Biden navigated the party to the spot it occupied in the Obama years: critical of Netanyahu’s policies and of Israel’s refusal to show more goodwill toward the Palestinians, but unquestionably supporting Israel’s need for American military and diplomatic backing.

News of the normalization deal between Israel and the United Arab Emirates sent a sudden jolt of excitement throughout the region. The surprise announcement seemed to be a rare event that’s good for (almost) all players: Israel registered a historic deal with a Gulf nation, breaking the notion that no Arab country will normalize relations with Israel before the Palestinian conflict is resolved; The UAE won praise for showing bold leadership; and the Trump administration gained well-needed points for exercising effective diplomacy which managed to get Netanyahu to withdraw from the unilateral annexation plan, while advancing regional relationships.

But a few days in, the complexity of the deal began to emerge. Mainly as it became clear that in return for the UAE’s willingness to make its relationship with Israel official, America will be open to the Emirati request to purchase F-35 fighters.

Israel, as it made known last week, opposes the sale of these advanced aircrafts to any Arab country, including UAE, because it fears such a deal will upend the U.S.’s promise to maintain Israel’s qualitative military edge over its neighbors.

The back and forth will go on way beyond the November elections and it’s not yet clear whether the F-35 deal will go through, but the debate helps clarify how hidden interests come to play even in major diplomatic moves.

President Trump and his son-in-law/senior adviser Jared Kushner put great value in expanding American arms sales. Kushner brokered huge arms deals with Saudi Arabia early in Trump’s presidency and is now pushing for the UAE deal. Sure, the Trump administration cares deeply about Israel’s security. But they also care about bringing home multibillion-dollar arms sales. And now, it’s up to Netanyahu and the pro-Israel lobby to navigate the intersection of these interests and try to find a formula that will keep Israel’s QME (qualitative military edge), while making sure Trump and Kushner are able to bring home their arms deals.