The globe used to light up. It still showed Yugoslavia as a country. Greenland was peeling and New York had a tiny star sticker: home.

It was my grandmother Gloria’s. In the days after her funeral in 2015, I huddled with my family in her Florida condo. At our own private shiva, remembering her, we cried, we laughed. We tried on her clothes and found her jewelry, tissues dotted with lipstick, shop receipts in her pockets.

Tucked behind some books, the globe had its electrical cord wrapped tightly around it. It had been out of service for years. The dust was thick and yellow like a sandstorm had overtaken the northern hemisphere. I want this, I say.

As a child, I made maps out of loose-leaf paper and tape, covering the floors of our apartment. Obsessed as I was, my grandmother brought out her globe and spun it for me. Transfixed, I asked her where she was from (Memphis), where her great-grandparents were from (Amsterdam and Illinois), and where she’d been. Almost every visit to her house—and there were many—involved plugging the globe in and dragging my fingers along its latitudes.

When, as a young adult, I was about to embark for Israel, she took out the globe again. The light no longer worked. She pointed out Israel, though I, of course, knew where it was. She pronounced it Isreal and told me, “There’s nothing like setting foot on ground where there are so many Jewish people. It’s like you’re home.” She was right.

Leaving my grandmother’s condo for the last time, I lugged the big globe onto the plane, across the country, and into my house. There, I placed it on a high shelf, out of reach, out of mind.

Then I learned about tikkun olam. I brought rituals into my family’s Jewish life. My six-year-old daughter, Gillian, (G for Gloria), knew them all—Shabbat, holidays, a nightly shema. I took a job in the Jewish community. I decided tikkun olam would be our family’s guiding mission. But how can we repair the world if we can’t see it?

So I took the globe down from its shelf to see the world better.

Again, it was frosted with dust. I spun it with my finger on the equator, my mark on the world. Gillian, nicknamed Gigi for my grandmother’s favorite movie, was enthralled. 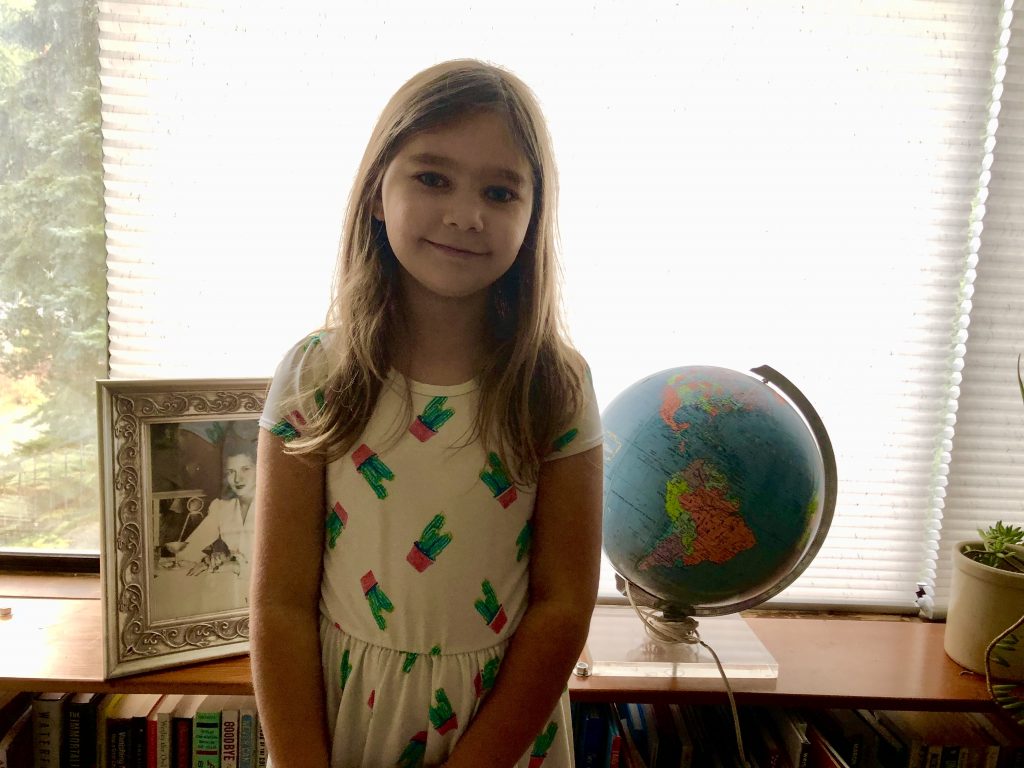 Gigi with the globe and her great-grandmother’s photo

I showed her a few of the many places her family came from: Spain, Amsterdam, Russia. If we could zoom in, some of those places would no longer be on the map. I looked at the battered globe and wondered whether it could be repaired.

Gigi spun the globe. Show me where the Eiffel tower is. Is this where Auntie Kae lives? She pointed to New Zealand. I nodded.

You are here, I said, and took her delicate bird hand in mine, pointing her finger to the place where Puget Sound formed a tiny U in the land. “None of this is so small in real life,” I told her. “This is just an approximation of the world.”

She asked is it this big, and held her fingertips out wide. When I said, No, bigger, she held her hands a shoebox width apart. This big? No. She picked up a throw pillow. I shook my head. When she held her arms out as wide as she could, I stepped into them and she closed them around me. Yes, this feels right, I said, nuzzling my nose into her knotted hair that smelled like rosemary. Yes, I said, the world is this big.

My husband studied electrical engineering in school. He says he can fix the globe’s cord, make the world light up again.

It seems beshert to have this small world to remind the three of us that we are needed to repair the larger one. As a family, we practice tikkun olam with Jewish values like tzedakah, teshuvah, gemilut Hasidim. And hakarat hatov, gratitude. 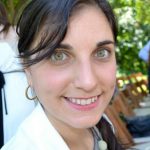 Jennifer Fliss is a Seattle-based writer whose work has appeared in F(r)iction, The Rumpus, The Washington Post, and elsewhere, including the 2019 Best Short Fiction anthology. She; her husband of almost ten years, Tim, a software engineer; and their daughter Gigi practice tikkun olam in their community and school by supporting efforts to end racism, inequality and homelessness. Find her on Twitter at @writesforlife or via her website, www.jenniferflisscreative.com.