The Year of the Woman Campaign

The public sphere is in great need of leaders who choose collaboration over confrontation, pragmatism over preening, compromise over conflict.

And research shows that women often bring these very qualities to leadership roles—along with a commitment to solving problems and the ability to rebound from failure.

To celebrate these qualities—and encourage more men and women to embrace them—2018 is Moment’s  Year of the Woman. 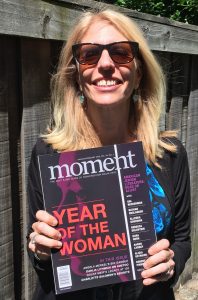 During the year we will be highlighting women—in print, online and in person. One special moment will be our November 11 gala and awards dinner, where we will present Justice Ruth Bader Ginsburg with Moment’s Human Rights Award; investigative reporter and author Jane Mayer will receive the Robert S. Greenberger Journalism Award. We will also be presenting visionary artist Carol Brown Goldberg with Moment’s Creativity Award and former U.S. Representative to the UN Esther Coopersmith will receive Moment’s Lifetime Achievement award.

In addition to these and the stories listed below, we will be compiling lists of ‘once and future’ women leaders: the women who paved the path for us and the women stepping up to take on new roles in public life.

Highlights of Moment Coverage about (and by) Amazing Women

Lessons in Leadership from my Mother, by Moment Editor-in-Chief Nadine Epstein, March/April 2018

A New Year of the Woman, by Ellen Wexler, March/April 2018

How Israeli Women are Making Political Progress, by Sarah Breger, May 2018

No Patience for Patriarchy, by Eetta Prince-Gibson, November/December 2017

A Matter of Dreams, by Eetta Prince-Gibson, July/August 2015

From Arab to Palestinian Israeli: One Family’s Changing Identity, by Dina Kraft, September/October 2009

For information on Moment’s Year of the Woman and how you can get involved with these activities, email Pat Lewis, plewis@momentmag.com