“Paintings, Politics and the Monuments Men: The Berlin Masterpieces in America”
Cincinnati Art Museum, on view through October

In November 1945, 202 artworks from the Berlin State Museums were painstakingly packed into 45 cases in Wiesbaden, Germany. From Wiesbaden, the masterpieces traveled by train through Frankfurt to Paris, arriving in Le Havre on November 21. There the shipment was loaded onto the military carrier James Parker, which departed for its transatlantic voyage on November 28 and arrived in New York eight days later. The artworks were then transferred for safekeeping to the National Gallery of Art in Washington, DC, where they were secured in air-conditioned storerooms.

This important, yet relatively little known, episode in the history of cultural heritage was the subject of the exhibition “Paintings, Politics and the Monuments Men: The Berlin Masterpieces in America,” which was on view through October 3 at the Cincinnati Art Museum (CAM). The exhibition told the story of how and why some of the world’s most iconic European paintings—16th- to 18th-century works from Berlin museum collections discovered at the end of World War II by the U.S. Third Army in the Kaiseroda salt mines at Merkers—left Germany immediately after World War II and ended up touring the United States in what became the first blockbuster art exhibition of our time.

The Cincinnati show examined the complicated role of art in times of turmoil and war and highlighted the importance of tracking the movements and uses of cultural treasures. At the center of the exhibition were four of the original paintings that appeared in the traveling show in 1947-1948, including Sandro Botticelli’s Ideal Portrait of a Lady and Antoine Watteau’s The French Comedians, accompanied by works from the CAM’s permanent collection by artists represented in the original show, including Andrea Mantegna and Peter Paul Rubens. 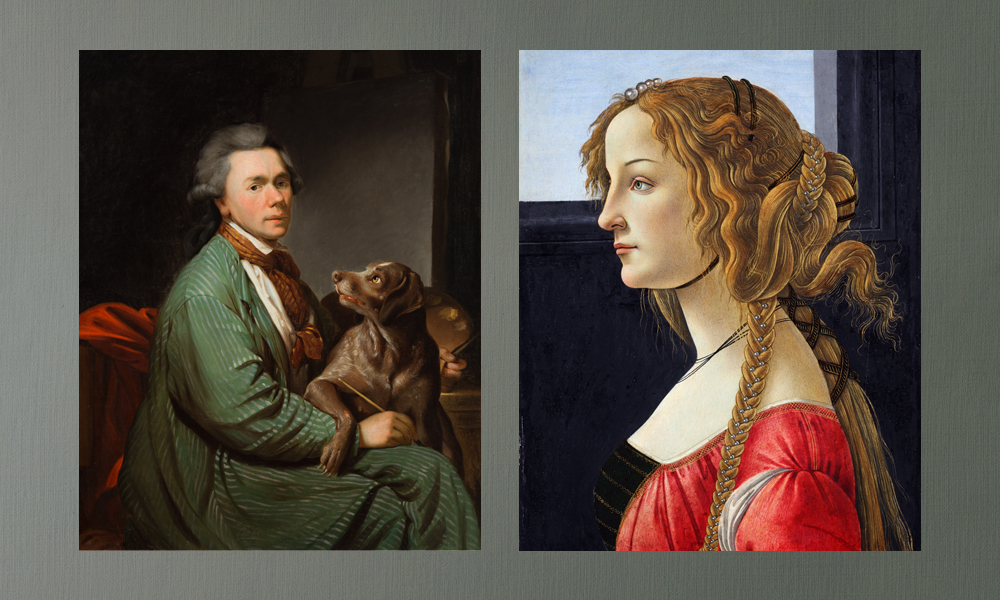 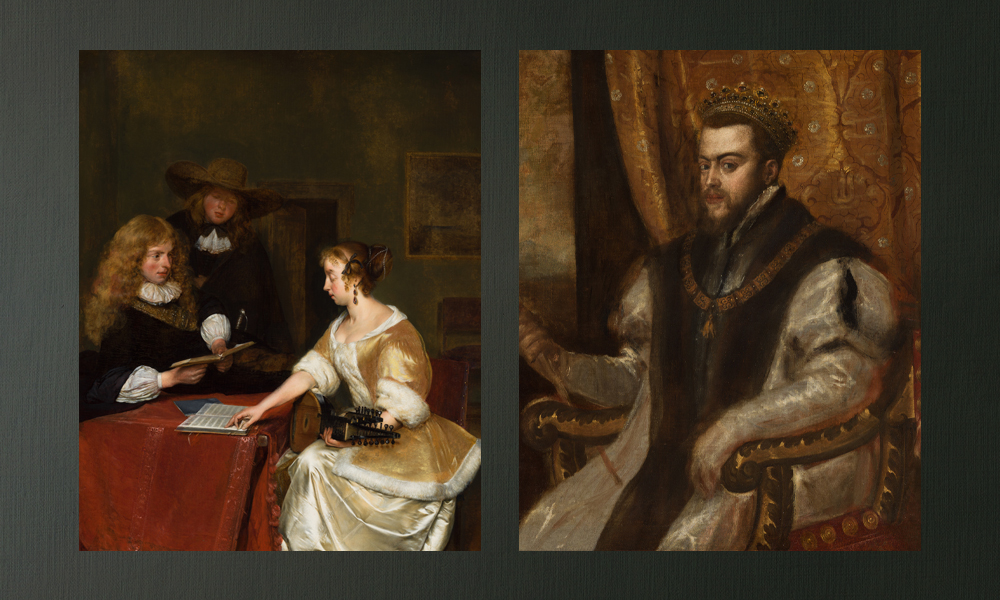 During the final years of World War II, Allied forces undertook the task of protecting artworks, archives and monuments of historical and cultural importance in Europe. At the same time, they sought to return works looted by the Nazis to their rightful owners. These efforts were led by a group of men and women who were part of the Monuments, Fine Arts, and Archives (MFAA) program, which was established in 1943 under the Civil Affairs and Military Government Sections of the Allied armies. The program, dubbed the “Monuments Men,” included museum curators, art historians and others with experience in identifying and caring for works of art.

On November 6, 1945, Cincinnatian Walter Ings Farmer, a “Monuments Man” and director of the Central Collecting Point (CCP) in Wiesbaden, Germany, where artworks were gathered, documented and prepared for return to their rightful owners after the war, received a hand-delivered telegram from Seventh Army Headquarters. The telegram ordered that “immediate preparations be made for prompt shipment to the U.S. of a selection of at least 200 German works of art of greatest importance.” The operation was given the code name “Westward Ho!” Farmer and his fellow Monuments Men strongly opposed this order and mounted an official protest, pointing out that such an action would make the United States “no better than the Nazis.” But the order stood. 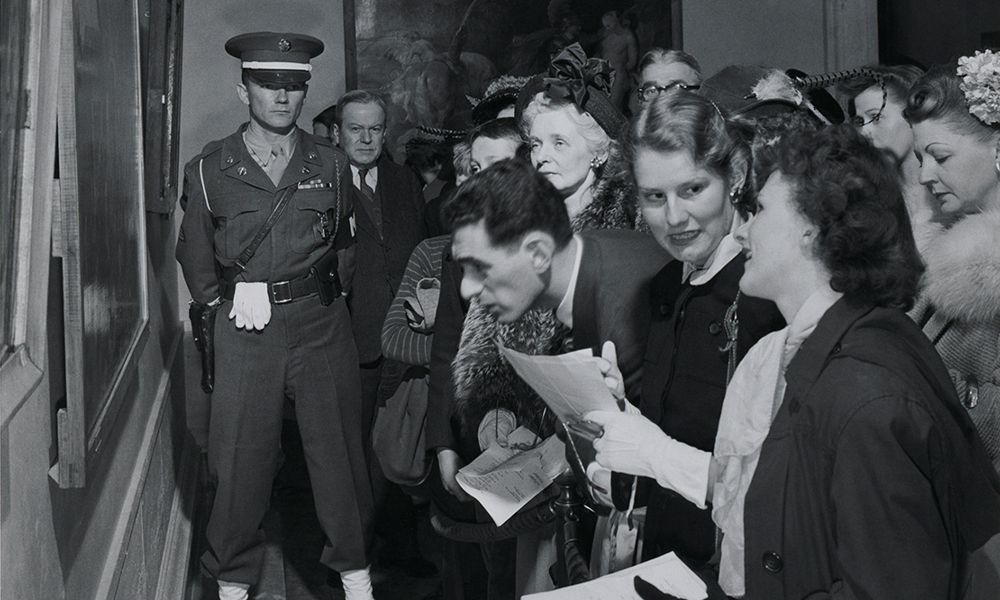 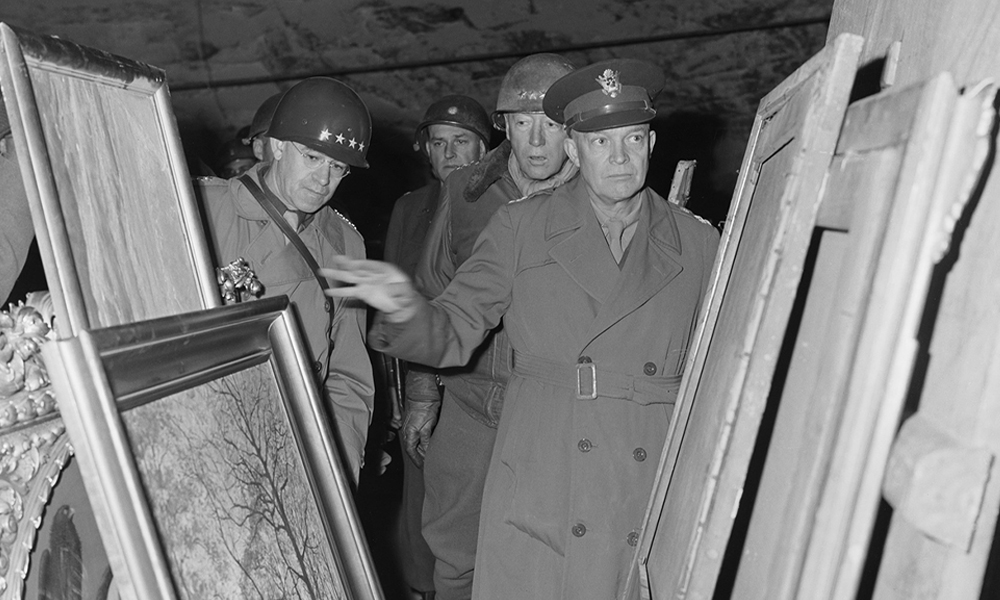 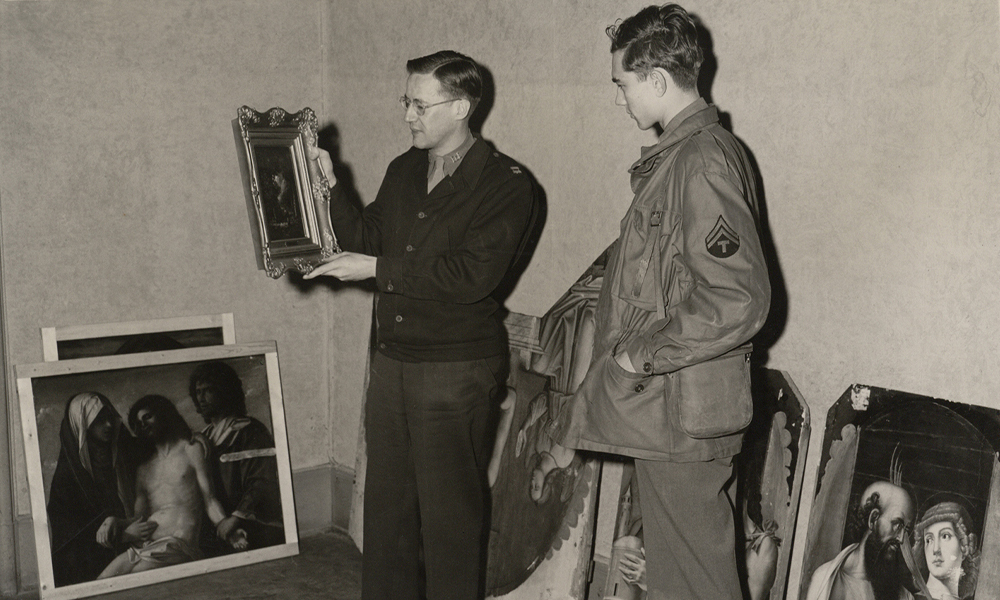 The “Berlin 202” that were assembled and sent to the United States included five works by Botticelli and his workshop, fifteen by Rembrandt, three by Raphael, two by Vermeer, six by Rubens, five by Titian, and a Caravaggio, among others. In March 1948, the masterpieces were taken out of storage at the National Gallery of Art, where they had been secured for more than two years, and put on public display there for six weeks. Crowds waited in lines for hours, and attendance totaled nearly one million. President Truman visited the show and commented that his favorites were works by Rembrandt, Titian, Holbein and Frans Hals. The response to the exhibition was so enthusiastic that the bulk of the works were sent on a nationwide tour, authorized by Congress, to 13 additional cities. It was agreed that 53 paintings would be returned to Germany after the National Gallery exhibition, 52 after the fifth venue and the rest at the end of the tour in 1949.

The traveling exhibition was the first substantive display of one of Europe’s great art collections in the United States. It was viewed by nearly 2.5 million people across the country, from Washington, DC and New York City to Minneapolis and Los Angeles. At the exhibition’s opening in Toledo in 1948, Perry Rathbone, director of the Saint Louis Art Museum, spoke. “For many the exhibition will be a discovery, a revelation, the beginning of a life-long pleasure in the contemplation of works of art,” he said. “I am confident that the exhibition has already greatly elevated the place that art occupies in the public mind as no other event in the art history of this country has done.”

The logistics of moving more than 100 paintings to 14 venues were daunting. A detail of trained military police was assigned to guard the multimillion-dollar artworks. The general security rule was that for every 20 paintings, at least one guard needed to be present during exhibition hours. The show spent about three weeks at each venue, with just a week in between to take down, transport and reinstall the exhibition. Transportation was in closed vans heavily guarded by the army. Special rail cars, usually reserved for the transport of thoroughbred horses, were also employed.

In total, the paintings on the tour traveled about 12,000 miles. Parades and military bands often accompanied the masterpieces from rail station to museum. In Chicago, observers reported that the artwork was “guarded and handled as if it were a cargo of crown jewels or atomic bombs.” Citizens gathered on the streets downtown to watch the crated masterpieces pass by and witness the “unpacking” of Vermeer’s Woman with a Pearl Necklace in the street as it was formally presented to the president and director of the Chicago Art Institute.

From the exhibition’s final venue in Ohio, 38 boxes of paintings were transported in closed vans to Washington, DC and then to New York, where they were loaded onto an Army transport that left New York harbor on April 22, 1949. The works arrived in Wiesbaden on May 14 and remained there until 1956, when all were returned to West Berlin. Today, 200 of the works reside in the Gemaldegalerie and the Bode-Museum and two at the Alte Nationalgalerie in Berlin.

The Cincinnati Art Museum exhibition is accompanied by a major publication, The Berlin Masterpieces in America, produced by the CAM with D Giles Limited. The publication, which features new research from European and American scholars, was organized by CAM curator Peter Jonathan Bell and Kristi A. Nelson, executive vice president for academic affairs at the University of Cincinnati, who are also co-curators of the exhibition. The book and exhibition, says Peter Jonathan Bell, “offers a valuable look into a landmark event in the history of art and 20th-century geopolitics. The fate of the ‘Berlin 202’ and the broader context of how art was used in the World War II era has affected how we think about ownership and value and cultural patrimony, and how we look at art today.”

END_OF_DOCUMENT_TOKEN_TO_BE_REPLACED

2 thoughts on “The First Blockbuster Art Exhibition of Our Time”