VARIAN FRY TO THE RESCUE

I was pleased and surprised to read in Moment’s fascinating Role Model Project article (November/December) that Esther Wojcicki named Varian Fry as one of her role models. He surely is one of mine. During the development of the United States Holocaust Memorial Museum, there was much discussion about which special exhibitions would premiere with the opening of the museum. I pleaded the case for an exhibition about Varian Fry and his singular rescue mission in Vichy France. No one had heard of Fry. But I won the argument, perhaps because he was an American who performed heroically during a dark period for the United States during the Holocaust. The result was the exhibition “Assignment Rescue: The Story of Varian Fry and the Emergency Rescue Committee,” which I curated.

Although Fry was not an active member of the recently organized committee, he volunteered to go to Marseilles for them in 1940. He arrived with money taped to his leg and lists of people—most were well-known artists, writers and thinkers caught in the refugee mill of the South of France, where the Vichy government agreed to “surrender on demand” anyone on the Gestapo’s lists.
He took a room and sought advice from others. This was an important element of Fry’s success. He formed a team of expat Americans he met there and of refugees with skills he needed. This group became a “legal” humanitarian aid organization, but really it served as a cover for illegal activities such as finding people in hiding, forging documents, spiriting some of the incarcerated out of detention and leading individuals and groups out of France.

Fry worked tirelessly, drawing more and more unwanted attention to himself. With the exception of an ally at the American Consulate, he became anathema to his own country. When his American passport expired, the State Department did not renew it, placing him in grave danger. Fry stayed true to his mission, and when he was finally arrested by Vichy, he was told that it was at the behest of the United States government.

Estimates vary, but certainly Fry rescued more than 2,000 people, including some whose presence changed American arts and letters after the war. Fry was not Jewish, he was not European, he was not a soldier or a spy. When asked why he went, he said that he owed the artists, scholars and writers caught in a most dangerous situation “a heavy debt of gratitude for the pleasure they have given me…I felt obligated to help them, if I could.”
Susan W. Morgenstein
Chevy Chase, MD

I am curious as to why in “The Eighth Night: A Time to Remember Great Women” (November/December), Nadine Epstein thinks we should idealize Hannah, who we are told encouraged her sons to accept death and then martyred herself. I am not a rabid feminist, just a mother of three and a grandmother of four. I’m not ready to say that martyrdom is admirable just because we are looking for female heroes. Deborah, yes. Judith, yes. Hannah Senesh, yes. Hannah of the Hanukkah story, no.
Leah Abrahams
Chestnut Hill, MA

Editor’s note: It wasn’t our intention to hold up Hannah as a role model. She was mentioned as a woman peripherally associated with the holiday of Hanukkah.

Stories like “Breaching the Wall” (November/December) show how important it is to have well-trained and experienced journalists such as Ohad Hemo, Nurit Yohanan, Itai Anghel and Gideon Levy keeping the lines of communication open and the public informed. While politics and opinions might differ, often these reporters take on difficult and sometimes dangerous assignments to broaden their audiences’ knowledge and allow them to form informed opinions.

In this age of mis- and disinformation, coupled with the often perilous economic state of newsrooms, we all would do well to support media outlets and journalists who, with their fact-based reporting, help keep our democracies alive. My respect goes to the journalists portrayed in your story as well as to the many others who do this job, which in today’s world has often become thankless. May readers and audiences consume their work and discuss issues on the basis of truth and fact-based reporting instead of made-up hype and barely researched opinion pieces and sound bites. Thank you, Moment, for portraying reporters who take their vocation seriously.
Birgit Rieck
Ann Arbor, MI

FAILURE IS NOT AN OPTION

After reading Fania Oz-Salzberger’s column “Are Haredim Failing Their Children?” (November/December), I want to say that I was raised Orthodox, and I feel the urge to give the Haredim a lot of slack when it comes to following their religious beliefs. But I can’t support failing to provide a basic education in secular studies to their children. An education must enable a child to function in the society where they will live—not just in their specific subset of that society. Children do not get to choose their education, and by failing to teach basic subjects like math and English, parents are in essence locking their children into the culture and society they were born in by disabling them from being able to exercise their own religious freedom as adults.
Irredeemablesavage (via Reddit)

As a clinical psychologist in private practice who also researches parental estrangement, I read the latest “Ask the Rabbis” (“How Would You Counsel a Parent and Child Who Are Estranged?” November/December) with great interest.

Estranged parents often tell me that their adult child is rewriting the history of their childhood, accusing them of things they didn’t do and/or failing to acknowledge the ways in which the parent demonstrated their love and commitment. Adult children frequently say the parent is gaslighting them by not acknowledging the harm they caused or are still causing, failing to respect their boundaries and/or being unwilling to accept the adult child’s requirements for a healthy relationship.

Both sides often fail to recognize how profoundly the rules of family life have changed over the past half century. The moral framework that guided family life for millennia has been transformed from “Honor thy mother and father” to one predicated on respecting boundaries, protecting one’s mental health, and developing relationships in line with one’s ideals for personal growth and happiness. While there’s nothing especially modern about family conflict or a desire to feel insulated from it, conceptualizing the estrangement of a parent as an expression of personal growth is almost certainly new.

Rising rates of individualism, an increasingly tribal view of society and the inflammatory role of social media all increase the risk of family fractures. While parental abuse or neglect can lead to estrangement, so too can a motivated daughter- or son-in-law, a therapist who wrongly assumes every adult problem has a childhood trauma attached to it or a child who knows no other way to separate from their loving but overly worried and involved parents than to cut off contact. From the adult child’s perspective, there might be much to gain from an estrangement: the liberation from those perceived as hurtful or oppressive, the claiming of authority in a relationship, and the sense of control over which people to keep in one’s life. For the mother or father, there is little benefit when their child cuts off contact; only grief, regret and sorrow.

I agree with those rabbis who expressed a reticence to offer counsel, though I believe that an emphasis on compassion and empathy for all parties concerned is essential. The family dynamics around estrangement are almost always complex—even therapists with years of experience can make matters worse if they don’t have extensive experience in this area.
Joshua Coleman, author, Rules of Estrangement: Why Adult Children Cut Ties and How to Heal the Conflict
Oakland, CA

TALK OF THE TABLE

FALAFEL BRINGS US TOGETHER

Thank you for writing about our beloved Amsterdam Falafelshop in “Talk of the Table”—(“Falafel: The Crunch that Binds or Ball of Confusion?” November/December). Many times customers choose their falafel based on an allegiance to their country of origin. In our shop, however, we celebrate falafel without creating a chasm between cultures. We just make the best falafel we can, and we have created a safe space where people of all backgrounds can eat side by side enjoying a moment together, bound only by their love of food.

Understanding what goes on behind the scenes is just as important. In this economic climate, none of the above matters if we cease to exist. Supporting small businesses is the critical key to a strong local economy, as well as the lifeblood of families who have invested everything they have to bring you the food you love.
Arianne Bennett
Washington, DC

​​I’ve read a lot of stuff in the press lately that falls short in confronting antisemitism. Moment stands out where many other publications remain silent. A recent example was your excellent web piece on Dave Chappelle’s monologue on SNL, “Chappelle Stirs the Pot As Fallout from Kanye’s Antisemitism Boils Over” (momentmag.com/chappelle-stirs-the-pot-antisemitism/). You did such a beautiful job articulating what transpired during those roughly 15 minutes that came “Live from New York!” to all those who heard it but yet could not see through (or chose to ignore and enable) Chappelle’s subtext. Thanks for all you do!
Ronen Sebag
Logan, UT 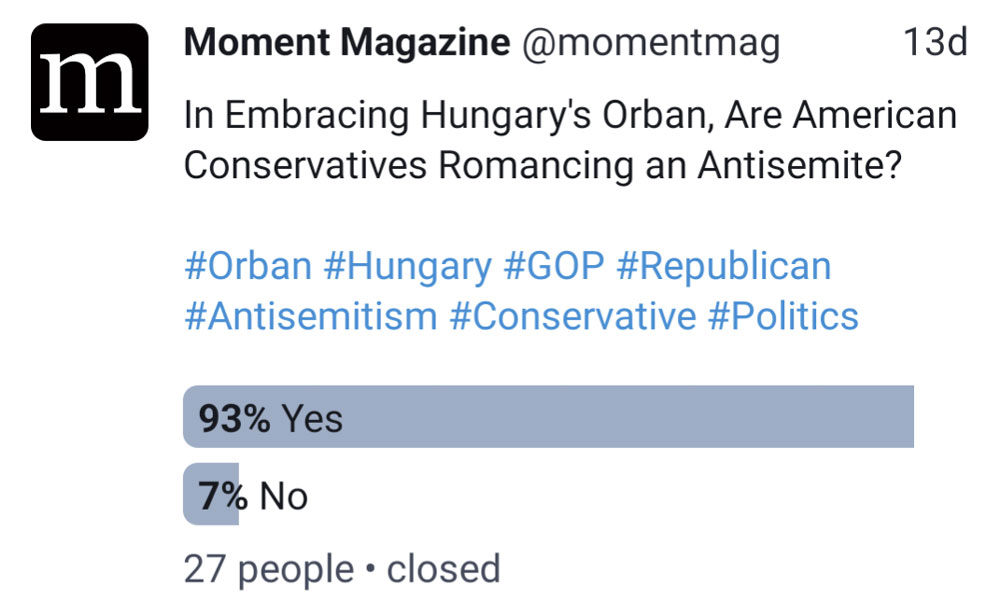 In the previous issue, Moment asked if, in embracing Hungary’s Orbán, American conservatives are romancing an antisemite. We asked followers of Moment’s Twitter (below) and Mastodon (bottom) to weigh in. The majority answered yes.