Ten Musicals by Jewish Composers to Watch In Times of Quarantines

In this time of uncertainty, Moment is working hard to provide you with fact checked news, resources and analysis—plus some lighter fare—to help us make it through the crisis together. Click here for our ongoing Coronavirus coverage.

Enough of medical warnings. If you want to relax and keep happy at home, watching musicals is just the thing. Here are some selections by our favorite Jewish composers and lyricists, many of which are available to stream online; the songs also might be found on Spotify, Apple Music or other music streaming services. 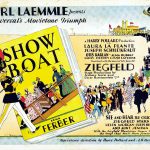 Probably the first real Broadway musical with a story, Show Boat, with music by Jerome Kern and lyrics by Oscar Hammerstein II, opened in 1927, was made into a movie in 1936 and 1951 and into a TV version in 1989. Its songs are unforgettable: “Ol’ Man River,” “Make Believe,” “Why Do I Love You,” “Can’t Help Lovin; Dat Man,” and “Bill,” which had lyrics by P.G. Wodehouse. Kern wrote songs for a number of Hollywood musicals, and came back to Broadway in the early 1930s when one of his shows, Roberta, spawned a song that lived on for ages, with lyrics by Otto Harbach: “Smoke Gets in Your Eyes.” A 1935 film version featuring Fred Astaire and Ginger Rogers added two songs with lyrics by Dorothy Fields: “I Won’t Dance” and “Lovely to Look At.”

Of Thee I Sing 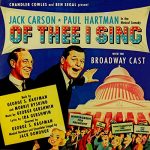 This 1931 Broadway musical, with songs by George and Ira Gershwin and book by George S. Kaufman and Morrie Ryskind, was the first musical to receive a Pulitzer Prize for drama. It was never made into a movie, but CBS aired a TV production in 1972. A satire on politics, where John P. Wintergarden runs on a platform of “love,” with his vice president, Alexander Throttlebottom, trying to find the Senate where he believes he is supposed to preside. A chorus of reporters sings “17 vacations you’ve had since you’ve been here”—sound familiar? Among the other songs that have lived on are “Who Cares,” “Love Is Sweeping the Country” and the title song, which includes this inimitable verse: “He’s the man the people choose, loves the Irish and the Jews.” (Could Ira get away with that today?)

The Boys from Syracuse 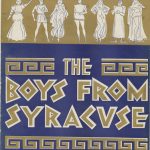 Before Rodgers and Hammerstein there were Richard Rodgers and Lorenz Hart. The Boys from Syracuse was an amusing if slightly hackneyed show from 1938—and a film in 1940—based on Shakespeare’s A Comedy of Errors. Two songs that lasted are “Falling in Love with Love” and “This Can’t Be Love.”

Annie Get Your Gun 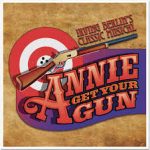 This musical, with music and lyrics by Irving Berlin, was a big hit on Broadway in 1946 and later as a film in 1950. This rip-roaring tale of the Wild West features a number of popular songs, including “There’s No Business Like Show Business,” “Doin’ What Comes Natur’lly,” “They Say It’s Wonderful” and “Anything You Can Do (I Can Do Better).” Berlin, of course, wrote many musicals and popular songs in his 101 years. Born Israel Beilin/Baline in Russia and growing up on New York’s Lower East Side, he was famous for many things, not least for writing “God Bless America” and “Easter Parade,” both classics of American life. 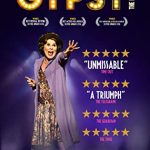 Called possibly “the greatest of all American musicals” by The New York Times’s Ben Brantley, Gypsy had a musical score by Jule Styne (originally Stein) with lyrics by Stephen Sondheim. It opened on Broadway in 1959 starring Ethel Merman (originally Zimmerman), was made into a movie in 1962 with Rosalind Russell, and has generated many revivals and TV versions over the years. Among the popular songs from the show are “Everything’s Coming Up Roses,” “Let Me Entertain You,” “Together (Wherever We Go)” and “Small World.” 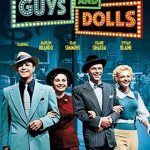 Guys and Dolls, with lyrics and music by Frank Loesser, was based on Damon Runyon’s stories of New York’s underworld of gamblers and gangsters. It came to Broadway in 1950, with a film in 1955 starring Marlon Brando and Frank Sinatra, and has had many revivals since then, including a 1992 documentary, Guys and Dolls: Off the Record. The many popular songs include “I’ll Know,” “Adelaide’s Lament,” “Luck Be a Lady,” “Sit Down, You’re Rocking the Boat,” “Marry the Girl Today,” “Take Back Your Mink” and “If I Had a Bell.” 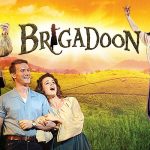 Brigadoon, which opened in 1947, was the first Broadway success of Alan Jay Lerner and Frederick Loewe, who would produce their greatest hit, My Fair Lady, nine years later. This fantasy of a Scottish village that only appears one day every 100 years was made into a film in 1954 and has such delightful songs as “Almost Like Being in Love,” “From This Day On,” “Come to Me, Bend to Me,” “The Heather on the Hill,” “There But for You Go I” and the hilarious “My Mother’s Wedding Day.”

The King and I 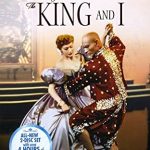 The King and I, one of several collaborations between Richard Rodgers and Oscar Hammerstein II, opened on Broadway in 1951 starring Gertrude Lawrence and a mostly unknown Yul Brynner. Brynneralso appeared in several revivals and in the 1956 film version with the role of Anna played by Deborah Kerr (although Marni Nixon dubbed her singing). There are so many lovely songs that are often overlooked today: “Hello Young Lovers,” “Whistle a Happy Tune,” “Getting to Know You,” “Something Wonderful” and “Shall We Dance.” 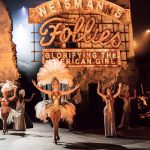 Follies, the 1971 musical by Stephen Sondheim, presents old-time actors coming together for the last time to a famous theater that was about to be torn down and reminiscing about their past flings and successes. My favorite song is “I’m Still Here,” which Elaine Stritch adopted almost as her theme song in her 80s, insisting that women in their 50s and 40s hadn’t yet earned the right to sing it (“where have they been?” she asked). Other favorites from the show: “Losing My Mind” and “Could I Leave You?” 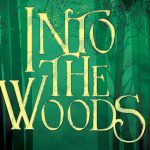 Since Sondheim is celebrating his 90th birthday, we can honor him for our tenth selection with another of his many shows. This 1987 dramatic musical weaves together stories from the Brothers Grimm, describing the characters and their problems in Act I, and then in Act II takes a dark turn; as the Narrator warns: “Once Upon a Time … Later.” Some of the best songs include “Children Will Listen,” “Agony,” “No Time to Be Alone” and “On the Steps of the Palace.”

END_OF_DOCUMENT_TOKEN_TO_BE_REPLACED

Facebook Twitter Pinterest linkedin Telegram
Twenty years ago, I fell in love with The Fiddler. You know who I mean, right? That ubiquitous guy on the roof? The memory of our fi...