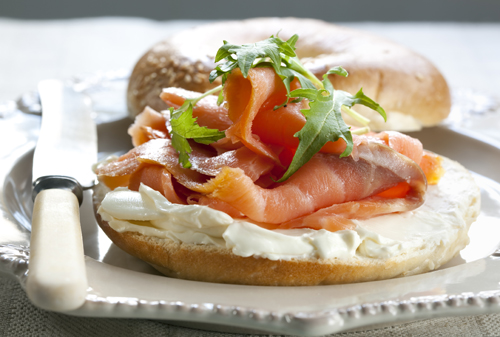 When I was growing up on the Upper West Side in the 1930s, Broadway was lined with “appetizing” stores, that—unlike delicatessens, which sold smoked, cured and pickled meats—specialized in fish and dairy. These were shops where we bought pickles, fresh sauerkraut, dried fruits and candies as well as pickled, smoked and salted fish, and especially what we called lox. At the time, this now-iconic Jewish food was skyrocketing in popularity, and appetizing stores opened to meet the demand.

Most Americans, even Jews, don’t know that lox was invented in America, not Eastern Europe, explains Gil Marks, author of the Encyclopedia of Jewish Food. “Salmon was not an Eastern European fish,” although it was familiar to Scandinavians and Germans, including German Jews, he says. While “bagels were Polish and cream cheese was Native American,” Jews began to eat salmon en masse in early 20th-century America, where the fish was plentiful.

European Jews had long smoked and salted their fish, and they did the same with salmon when the transcontinental railroad opened in 1869. Salmon from the Pacific Northwest was smoked and shipped east in barrels layered with salt, creating a brine that preserved it for months without refrigeration as it made its way cross-country. The result was what is known today as belly lox—the traditional authentic salty salmon cured in brine. It was affordable, easy to keep and pareve, so it could be eaten with dairy.

The word lox itself is evidence of the food’s non-Eastern European roots. “The key to understanding the emergence of the term among Eastern European Jews in America is that lox is a German word,” Marks says. Lox is the Americanized spelling of the word for salmon in Yiddish (laks) and in German (lachs), and also a derivative of the Swedish gravlax, meaning cured salmon. Nova Scotia salmon, known as Nova, gained popularity after the introduction of refrigerated cases; instead of brining, which was no longer necessary, the fish could be lightly salted and then smoked. Today, we still use the term Nova to refer to the more expensive smoked salmon, although eventually, the word lox has come to encompass salmon from both coasts and even northern Europe.

The variety of Nova available at stores today is overwhelming: There’s Scottish, Norwegian, Danish, Irish, Gaspé, Baltic, and it comes smoked, cured, salted, brined, and in pink, orange or red, the color chemically enhanced to hide its natural gray. To be true to tradition and taste, lox must be hand-sliced, extra thin and almost transparent, the critical last step at the counter by expert slicers. Then it is most often served on a bagel with a schmear of cream cheese. And even that is a fairly new idea. In my youth, you didn’t go to the appetizing store to buy a sandwich—you bought the ingredients and took them home to eat. No one knows who first brought lox, bagels and cream cheese together, although food writer Joan Nathan—who was recently shocked to discover that Nova is no longer found in Nova Scotia—suggests the sandwich might have originated in an early ad campaign for Philadelphia Cream Cheese.

Today, Manhattan’s 30 or more appetizing stores have mostly vanished. But the few that remain have zealous followings. Barney Greengrass on Amsterdam Avenue at 86th Street has been an Upper West Side tradition for nearly 100 years. Russ & Daughters down on East Houston Street evolved from Joel Russ’s pushcart in 1914. Zabar’s on Broadway and 80th Street, which started more than 70 years ago as an appetizing counter in a market, is now a one-stop emporium, with both deli and appetizing items, plus baked goods, gadgets and even appliances. “Appetizing is quintessentially New York, but the word never made it into the lexicon,” according to Niki Russ Federman of Russ & Daughters.

Today, lox is available on restaurant menus and in stores everywhere. Most retailers get their smoked fish from Acme Smoked Fish Corporation, which dates back to the early 1900s and is still located in Greenpoint, Brooklyn. It is one of the largest processors of smoked fish and herring in the country, and it is still, as is Russ & Daughters, family-owned and operated. At Acme, mostly farm-fished salmon, usually from Norway and Chile, is cured in a mild salt and brown sugar brine for up to a week, then cold smoked over fruitwood shavings for up to 24 hours. The result is a slightly smoky, salty flavor. And it is all done with automated equipment, which eliminates the smoke-filled  air of the old days.

Zabar’s alone sells 2,000 pounds of smoked salmon a week, up to 5,000 during the High Holiday season. Nova is their most popular fish product, says Saul Zabar, who describes it as “the mildest, least briny lox we sell, with a smooth, silky texture and a clean and fresh taste.” Like it smokier? Try their drier double-smoked salmon. Like most shops today, Zabar’s also sells gravlax. Found on Scandinavian menus, gravlax is not smoked, but rather marinated in a mixture of dill, sugars and spices, often juniper berries, then weighted down to push out moisture and spread the flavor. Gravlax means “salmon from the grave” to signify the old tradition of burying the salmon in the earth before curing. It is usually served with a sweet mustard-dill sauce.

Lox has also gone nouveau. In 2004, when 80 top chefs were invited to make a creative version of bagel and lox, they came up with a wildly diverse medley of imaginative dishes, all documented in The Great Bagel and Lox Book. Among the sacrilegious, way-out culinary inventions were a bagel spoon dipped in smoked salmon custard, white salmon carpaccio, smoked salmon foie gras, cannoli stuffed with smoked salmon and cream cheese, smoked salmon nicoise with chives and quail eggs. Lox has even found its way into Japanese food. Who among us hasn’t tried a lox and cream cheese combo—or, as it’s known on sushi menus, a Philadelphia roll?

Want to make your own lox?

Try this recipe for gravlax, cured in a salt-sugar-dill mixture, which doesn’t require smoking.
Adapted from Elisheva Margulies’s recipe on myjewishlearning.com.

Directions
Rinse salmon filet and cut in half to make two equal pieces. Place each piece on a shallow plate, skin side down.

Mix salt, sugar and pepper in a bowl. Pile half the mixture on each half of salmon. Then place dill on top. Sandwich the two pieces of fish together, skin side out, and wrap tightly with plastic wrap.

Place the fish in a gallon-size self-seal plastic bag, pushing out all the air, and seal. Put bag in a shallow dish.  Refrigerate, with weights on top—use another heavy dish, heavy cans, anything to weigh down the fish.

The lox will take two to three days to cure. At the end of each day, drain any liquid that has been extracted from the salmon and turn the salmon over so that both sides are evenly weighed down.

After two days, you can start to taste the fish. When it is cured to your desired taste, remove fish from the plastic and rinse it well. To serve, slice thin on the bias and discard the skin. To freeze, wrap well in plastic and place in a freezer bag.