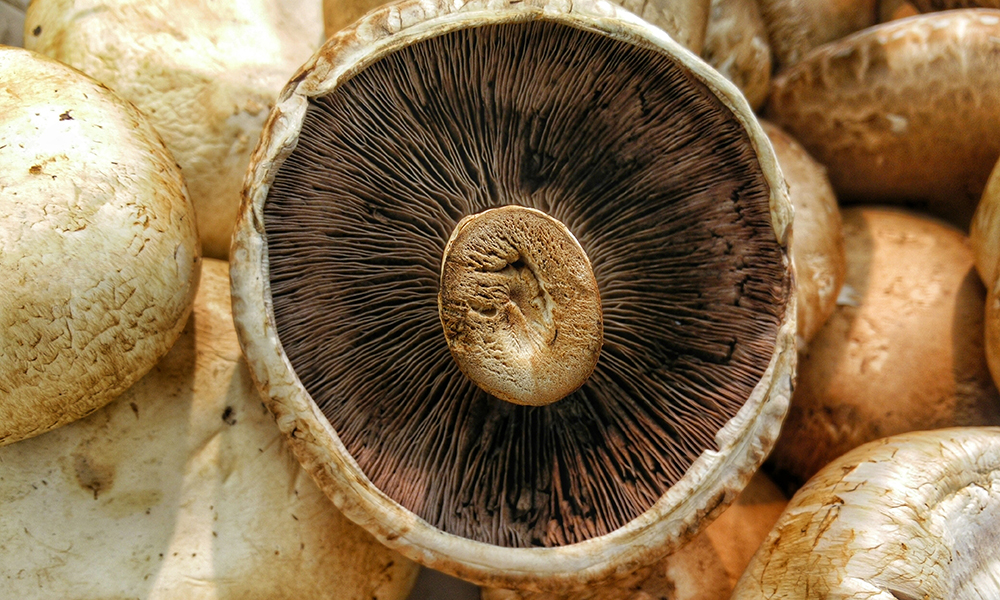 When a student of the famous Talmudic sage Rabbi Gamliel doubted the majesty of the World-to-Come, Rabbi Gamliel pointed to mushrooms and their spontaneous growth as evidence of the future abundance of the land of Israel. In fact, in ancient Israel, mushrooms, particularly the genus Boletus, were bountiful after heavy rainfalls and a favorite ingredient in ancient Israeli cooking. Since then, mushrooms—true to their nature—have popped up throughout the Jewish world in the most surprising of places.

In Jewish law, for example, their unique biology has been the object of many halachic discussions. Neither vegetable nor fruit, mushrooms gather nutrients from decaying organic matter, rather than through photosynthesis. As a result, Talmudic sages decided that mushrooms do not require the blessing for vegetables, borei pri ha-adamah (“who creates the fruit of the earth”), but  rather the blessing shehakol nih’ye bidvaro (“who created all things with His word”) used for food that does not fit into any other category. And because they are not planted, mushrooms were deemed exempt from tithes. Avrohom Bornsztain, a leading 19th-century posek (Jewish legal arbiter), even considered mushrooms blessed. When God expelled Adam and Eve from the Garden of Eden and cursed the earth’s land, obliging them to toil for food, Bornsztain says mushrooms, which require no human labor, were exempt from the curse.

Although mushrooms are kosher (as long as one checks for bugs), the medieval Jewish philosopher Maimonides warned against eating them in his Mishneh Torah because of the poisonous nature of certain varieties. Some Eastern European Jewish communities considered mushrooms treif well into the 20th century because of Maimonides’s warning, according to Barbara Kirshenblatt-Gimblett, a Jewish studies scholar who is chief curator of the POLIN Museum of the History of Polish Jews in Warsaw. Nevertheless, mushrooms (shveml in Yiddish) were especially important in Ashkenazi cooking because “they were among the few flavoring agents available to the poor in eastern Europe and could be picked free from the fields and dried for future use,” writes Gil Marks in his Encyclopedia of Jewish Food. Ashkenazi Jews sautéed mushrooms with onions, pickled them, stuffed them and added them to soups, stews, kasha dishes and fillings. Mushrooms gave “a meaty taste to food because of their umami [savoriness],” says cookbook author Jayne Cohen. They would “stretch the meat, and when there was no meat, mushrooms could fill that void.” Mushrooms were also part of Sephardi cuisine, says Cohen. “Sephardi Jews have mezes [appetizers] of pickled mushrooms and use mushrooms in frittatas and pilafs.”

Cooking with mushrooms, along with mushroom gathering, was customary among Jews in Slavic countries, says Maxim Shrayer, a Russian-American author and professor at Boston College. Both an everyday leisure activity and a way to supplement the food supply in Soviet culture, mushroom picking was seen by Jews as a way to “Russianize,” he says. When Russian Jews immigrated to the United States, they brought this tradition with them.

Shrayer argues that the use of mushrooms became more predominant in Eastern-European Jewish cuisine through this Soviet Jewish tradition, but Cohen disagrees. Once Jews began “borrowing from the cuisines of the countries that they were inhabiting, they started using ingredients in many of the same ways,” she says. Cohen maintains that foods “associated with Ashkenazi cuisine that use mushrooms,” such as mushrooms with barley, kasha and farfalle, or knishes with mushrooms, mushroom gravies and sour cream with mushrooms, “did not start in the 20th century after the Soviet occupation.”

Today’s chefs have easy access to a variety of exotic mushrooms, such as porcini, morels and chanterelles. “Mushrooms are considered a gourmet ingredient,” says Cohen, that “really elevates the level of a dish.” At the same time, commercial manufacturing has complicated mushrooms’ kosher status. Canned or precooked mushrooms require certification to verify they haven’t been contaminated by any non-kosher products processed in the same facility.

And lest we forget, certain mushrooms have an alternative use. The late Rabbi Zalman Schachter-Shalomi, founder of the Jewish Renewal Movement, famously experimented with psilocybin, a psychedelic found in 200 varieties of mushrooms. “I think to understand the depth of a religion, one needs to have firsthand experience,” he writes in 2005 in Higher Wisdom: Elders Explore the Continuing Impact of Psychedelics. “It can be done with sensory deprivation. It can be done a number of ways,” he writes. “But I think the psychedelic path is sometimes the easiest way.” Of course, 20th-century Jews were likely not the first to make this discovery. Cohen mentions how, in the Babylonian Talmud, “a rabbi recounts that he became so intoxicated by the fragrance of a mushroom dish that his health would have been in grave danger had he not been given some of the dish to eat.” Had he tasted a psychedelic mushroom? We can’t know for sure. What we do know, says Cohen, is that ancient Jews “were definitely enjoying their mushrooms.” —Lilly Gelman

In medieval times, anti-Semitic rhetoric compared Jews to mushrooms, referring to all fungi as “Jew Meat,” writes natural food expert Richard Mabey in his book Food for Free. Some say that this derogatory label stemmed from the mushroom’s slimy and often poisonous reputation. Many people also attribute the name of the “Jew’s ear” mushroom (Auricularia auricula-judae in Latin for “Judas’s ear”) to anti-Semitic sentiments associated with Judas, who Christian texts say betrayed Jesus. According to  the Oxford English Dictionary, however, the name “Jew’s ear” evolved as a fallacious iteration of “Judas’s ear.” Mushrooms also featured in Nazi propaganda. In 1938, Julius Streicher published Der Giftpilz (“The Poisonous Mushroom”), which teaches German children to distinguish between Jews and gentiles by differentiating between toxic and edible mushrooms.

Adapted from Jewish Holiday Cooking: A Food Lover’s Treasury of Classics and Improvisations, by Jayne Cohen
Pareve
Yield: 8 to 10 servings

3. Heat oil in 10-inch heavy skillet over medium heat. Add onions and sauté until crisp and light brown, about 15 minutes. Transfer to bowl and season with salt and pepper. Combine chopped mushrooms, garlic and reserved mushroom soaking liquid in the same skillet. Boil mixture over high heat, stirring until liquid evaporates. Add salt and pepper to taste and remove the skillet from heat.

4. Grate potatoes. Transfer to a colander, rinse well. Drain, using your hands to squeeze out as much liquid as possible. In a large bowl, combine potatoes, eggs, fried onion and plenty of salt and pepper.

5. Grease a 13-by-9-inch, or similar heavy baking pan (not glass), and place in oven until oil is sizzling hot.

7. Bake uncovered for about 50 minutes until top is golden and crisp. Let kugel cool until set.