Sufganiyot: The other Hanukkah treat

Sufganiyot, aka jelly doughnuts, are Israel’s Hanukkah food of choice. Before researching these fried confections, I thought that latkes were the traditional Hanukkah food the world round. After all, latkes are featured in every Hanukkah menu in all my food magazines – how is a shiksa like me to know otherwise? But no, latkes are actually an American favorite, while sufganiyot are more popular in Israel.

Because Hanukkah officially celebrates the “miracle of oil” during the re-dedication of the Temple in Jerusalem after it was desecrated by the Syrians, fried foods are a common way to commemorate the holiday. The delicacies range from region to region – fried apple fritters, fried dough dipped in honey, and, of course, fried potato pancakes and deep-fried jelly doughnuts are all traditional Hanukkah fare.

In a piece for the Pittsburgh Post-Gazette, Jewish cookbook author Gil Marks explains that sufganiyot actually originated in Poland. The Jewish community there adopted a local preserve-filled doughnut, the paczki, into their food traditions, which they renamed the ponchik. The ponchik eventually made its way to Israel, where it became known as sufganiyot.

Nowadays sufganiyot are much more than jelly doughnuts – fillings run the gamut from different preserves, to custards, to chocolate. Last year, Haaretz journalist Michal Palti complained that Israeli bakeries were ruining sufganiyot with “designer” flavors – his description of “trendy” sufganiyot fillings reminded me of the array of flavors at DC’s cupcake shops.

Palti would have been pleased that I chose a more traditional recipe for my first attempt at sufganiyot – the simple dough is flavored with nutmeg, fried in oil, and filled with jam. Although he probably would have disapproved of my filling choice—marionberry jam, a local Oregon specialty. Mostly I chose it because I had an unopened jar in my cabinet, leftover from a visit to Oregon.

Making and assembling the sufganiyot dough was quite simple, but the deep frying was another matter. I’ve only deep fried a handful of times, and my one previous experience with doughnuts was a disaster (burnt on the outside, raw on the inside, the entire batch was inedible). I got myself a deep-fry thermometer and tried to be vigilant about the oil temperature, but every time I added another batch to the pot, the temperature fluctuated wildly. My balls of dough turned dark brown in about 10 seconds – not the 40 seconds per side that the recipe calls for. Clearly I need some deep frying lessons. Or a real deep fryer, not a pot filled with oil.

My sufganiyot came out much browner and darker than I wanted them to be, although they were still tasty. Rolled in sugar, they even looked rather pretty. And I liked biting into the crisp, sugary crust and finding a pillowy interior filled with sweet-tart jam. No wonder these became such a popular treat in Israel. I have to say, I like them even better than latkes.

Get the recipe for sufganiyot over at Martha Stewart. 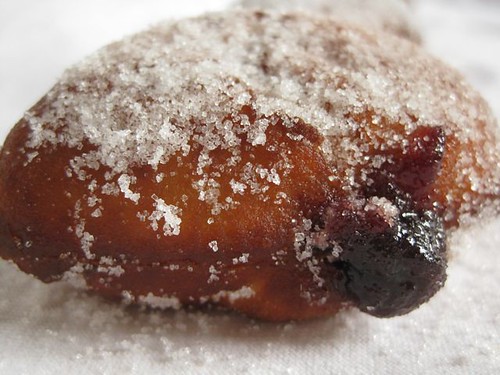 Okay, so it’s pretty brown. Also, it was tough getting the filling in there. But, really, fresh out of the pot they were quite tasty.

Jenna Huntsberger blogs at ModernDomestic chronicling an obsession with baking, pastry, dessert, and living the sweet life in our nation’s Capital.

The Miracle of Being Seen: A Very LUNAR Hanukkah

END_OF_DOCUMENT_TOKEN_TO_BE_REPLACED

When it comes to celebrating the Festival of Lights, eating latkes (fried pancakes) is almost as important as lighting the menorah. The hard question is: Which topping belongs on them? Whether you are Team Applesauce, Team Sour Cream, Team Ketchup or on some other team, join us as our great thinkers weigh in on why their favorite topping is best—in the spirit of the popular Latke-Hamantash Debate.
Moderated by C-SPAN Director of Communications Howard Mortman.
Panel:
* Sarah Breger, Moment deputy editor
* Barry Friedman, comedian, author
* Dahlia Lithwick, writer, journalist
* Rabbi Douglas Sagal, Congregation B’nai Israel, Rumson, NJ
* Alan Silberberg, author, cartoonist, screenwriter

END_OF_DOCUMENT_TOKEN_TO_BE_REPLACED

Beshert | The Eight Months Of (Well, After) Hanukkah

Facebook Twitter Pinterest linkedin Telegram
I met Laurie at a Hanukkah party in Fort Collins, Colorado, a small town that had almost no other single Jews my age. Our mutual friend...

END_OF_DOCUMENT_TOKEN_TO_BE_REPLACED

Princess Rebecca, of the Ladino kingdom of Galonia, appeared in an episode of  Elena of Avalor that aired on December 6. Elena is a Latinx princess who is the centerpiece of the Emmy-winning, Disney Junior Channel series which debuted in 2016. Until now there has been no Jewish princess—not that there wasn’t an abundance of attractive candidates.

END_OF_DOCUMENT_TOKEN_TO_BE_REPLACED

On Hannukah, Washington’s Jewish Power Players See Who’s In and Who’s Out

Standing on a cold December night in what seemed to be a never ending queue outside the Israeli embassy in Washington, visitors waiting to enter the embassy’s annual Hanukkah reception had plenty of time to commiserate.

END_OF_DOCUMENT_TOKEN_TO_BE_REPLACED

Songs for Your Hanukkah Playlist

There is a rich legacy of recorded music that can only add to our understanding of Hanukkah and our connection to its traditions.

END_OF_DOCUMENT_TOKEN_TO_BE_REPLACED

2016 November-December, Food, Talk of the Table

Hanukkah was really only about one thing when I was growing up. It wasn’t the presents—they were generally small and unexciting…

END_OF_DOCUMENT_TOKEN_TO_BE_REPLACED

2016 November-December, Food, Talk of the Table

Gelt-y Pleasures for All Ages

In the story of Hanukkah—the cruel reign of Antiochus, the unlikely victory of Mattathias and his sons, the one cruse of sacred oil left in the plundered Temple that burned for eight days—there is no mention of money.

END_OF_DOCUMENT_TOKEN_TO_BE_REPLACED

Facebook Twitter Pinterest linkedin Telegram
By Scott Fox I love Hanukkah: the presents, wintertime, dreidels, candle lighting. I love all of it. I was born on the fourth day of H...

END_OF_DOCUMENT_TOKEN_TO_BE_REPLACED

The Dybbuk of Christmas Past

Facebook Twitter Pinterest linkedin Telegram
By Matthew Kassel Christmas doesn’t mean much to me anymore, though for the first ten years of my life, it was my favorite holiday. Pr...

END_OF_DOCUMENT_TOKEN_TO_BE_REPLACED

Facebook Twitter Pinterest linkedin Telegram
by Steven Philp This past Saturday my family sat around the Christmas tree to unwrap presents. We have a particular system when it com...