Since Withdrawing from the Iranian Nuclear Deal, Has Trump Seen Any Results?

Home / Latest / Since Withdrawing from the Iranian Nuclear Deal, Has Trump Seen Any Results? 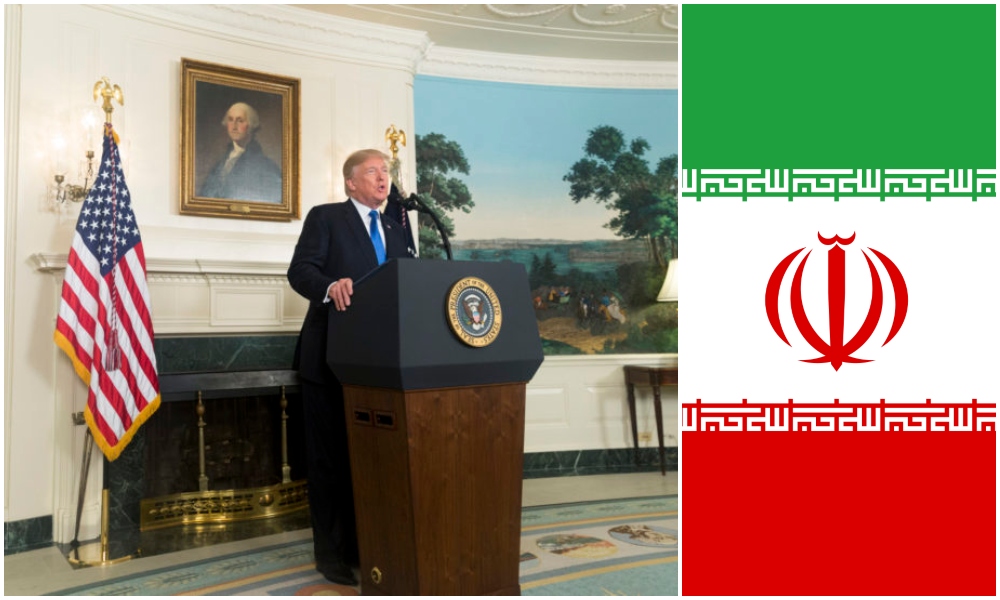 Since Withdrawing from the Iranian Nuclear Deal, Has Trump Seen Any Results?

Sign up here to get Politics & Power delivered to your inbox every Monday.

On Saturday, Secretary of State Mike Pompeo celebrated a milestone most Americans were not aware of: the two-year anniversary of the Trump administration’s withdrawal from the Iranian nuclear deal.

“Two years ago, @realDonaldTrump announced the bold decision to protect the world from #Iran’s violence and nuclear threats by withdrawing from the Iran Deal. Today, Americans are safer and the Middle East is more peaceful than if we had remained in the #JCPOA,” Pompeo tweeted.

Two years ago, @realDonaldTrump announced the bold decision to protect the world from #Iran’s violence and nuclear threats by withdrawing from the Iran Deal. Today, Americans are safer and the Middle East is more peaceful than if we had remained in the #JCPOA.

But it’s hard to substantiate Pompeo’s claim that Americans are now safer or that the Middle East is more peaceful, and recent events in the region offer facts that argue otherwise. In the two years since the U.S. dropped out of the deal, tensions in the Persian Gulf had reached a boiling point, freedom of passage in the crucial Gulf waters has been jeopardized, fighting spread to Saudi Arabia and endangered critical oil infrastructure, and U.S. and Iran came to the brink of a full out war after the killing of Qasem Soleimani and the retaliatory Iranian attack on an American base in Iraq.

At the same time, efforts to leverage America’s increased sanctions against Iran to forge a new and improved nuclear agreement have yet to yield any result.

But that is not to say that Trump’s new policy toward Iran failed to achieve its goals.

The Trump administration has been extremely successful in enforcing debilitating sanctions against Iran, despite strong European opposition and the reluctance of most world players to stop purchasing Iranian oil. America’s aggressive sanctions campaign has put the ayatollah regime in Tehran in a bind, as they face real pressure from the Iranian people for financial relief and democratic reforms while trying to maintain their costly regional involvement at a time when the local currency is plunging and oil revenue has hit historic lows.

2. Can U.S. Jews finally unite behind an Iran policy?

Trump’s decision to drop out of the Iran nuclear deal two years ago found the Jewish community still split over the agreement, just as they were when it was reached by Barack Obama in 2015.

Israel and the Benjamin Netanyahu government remain Trump’s most enthusiastic cheerleaders on this issue, advocating that breaking with the agreement will lead to a better outcome than that promised in the JCPOA, one that will resolve the key issues lacking in the original deal: the sunset clause which ends restrictions after a decade, and the limits on the inspection regime. Israel also supports Trump taking Iran to task on issues beyond its nuclear capabilities, including ballistic missile development, support for terrorism and meddling in regional issues.

Many in the Jewish community followed Israel’s cue on the Iran deal during the 2015 deliberations and still believe the agreement was fundamentally flawed and should never have been signed in the first place. Politically, these include Jewish Republicans and many Democrats who could, roughly, be defined as “AIPAC Democrats”—liberal on domestic issues, but hawkish on Israel. In their eyes, dropping out of the deal was a necessary move, which will eventually lead to a better agreement.

Then there’s the other half of the Jewish community, made up of the J Street crowd, Bernie Sanders Democrats and staunch Obama supporters. For them, time has proven the deal to be the best way of stopping Iran’s imminent threat to Israel, and the demise of the deal means that Israel, and America, are once again facing a possible nuclear threat.

But the upcoming elections could offer a meeting point for the divided community.

Most American Jews will end up voting for Joe Biden in November, and by doing so they’ll accept his mainstream Democratic approach to the nuclear deal: acknowledging its shortcomings, but offering a diplomatic olive branch aimed at reestablishing, and improving, the deal.

Here’s how Biden puts it in his campaign website: “Hold Iran accountable and rejoin a diplomatic agreement to prevent a nuclear armed Iran, if Iran returns to compliance with the JCPOA, using renewed commitment to diplomacy to work with our allies to strengthen and extend the Iran deal, and push back against Iran’s other destabilizing actions.”

This is a formula most pro-Israel Jewish Americans can sign off on. Hardliners will have to give up on their dream of regime change or of Iranian capitulation; liberals will need to accept the fact that Obama’s deal wasn’t perfect and requires changes, and both will get their basic requirement met: taking the nuclear threat off the table, in an effective way, for the foreseeable future.

There are many variables in place that could prevent this from happening. Iran needs to agree to negotiate in good faith, the U.S., either under Trump or Biden, would have to switch from threats to diplomacy, and Israel, with Netanyahu and Gantz at the helm, will have to accept a nuclear deal which doesn’t solve all the outstanding issues with Iran.

3. The next round on Iran

The Trump administration is now turning to the UN Security Council with a challenge that may shape the next phase in the diplomatic war against Iran. In October, the international UN-mandated embargo on conventional arms sales to Iran is about to expire. The U.S. wants it extended in order to ensure Iran doesn’t build up its conventional stockpile, which can be used to threaten its neighbors and international powers in the region.

In order to overcome resistance among other Security Council members to the extension (Europeans are skeptical, Russia and China which have veto power over every Security Council decision, are outright opposed to extending the embargo) the Trump administration has issued a clear threat: If the Security Council does not approve the extension, the U.S. will use a clause in the Iran nuclear deal, allowing it to “snap back” all sanctions against Iran—a symbolic move which will mark the final death of the deal.

Europeans, struggling to keep the deal alive, even if on life support, have raised a counterpoint: The right to invoke sanctions snap back is reserved to countries signed on to the nuclear deal. The U.S., they noted, withdrew unilaterally from the deal two years ago, so how exactly can it use it as a legal platform for punishing Iran?

The call for extending the conventional arms embargo on Iran enjoys broad support in the U.S. Congress. A letter endorsing Trump’s call to the UN, written by Democrat Eliot Engel and Republican Mike McCaul and backed by the pro-Israel lobby AIPAC, easily gained a bipartisan slate of 391 signatures in the House of Representatives. But only one of them stood out: Minnesota Democrat Ilhan Omar.

This would be the same Omar who just a year ago was embroiled in an ugly Twitter war against AIPAC, accusing the lobby of paying politicians to support Israel, and being widely condemned for these comments, seen as anti-Semitic.

Omar’s office, when asked about her support for the AIPAC letter, explained: “Congresswoman Omar has consistently, for a long time, supported arms embargoes against human rights abusers.” The statement also made clear, however, that Omar does not support Pompeo’s tactics, and that she still believes in the Iran nuclear deal.

Could this signal some kind of future cooperation between the pro-Israel lobby and the staunchest supporter of the Palestinian cause in Congress? Probably not. The animosity is too deep.

But it does highlight a point sometimes overlooked in the heat of the political debate: When it comes to dealing with dictators and human right abusers, the far-left peaceniks and the hardline hawks, may actually have more in common then they’d like to admit.

5. RJC has something to say about Steve King

In other news, the Republican Jewish Coalition (RJC) is ramping up its fundraising campaign aimed at ousting incumbent congressman Steve King in the Republican primaries early next month. King, an outspoken apologist for white supremacists and a supporter of white nationalists, is facing a tight primary race in Iowa’s 4th congressional district, and the RJC hopes it can help tilt the balance in favor of one of his leading opponents, Randy Feenstra. In a letter to supporters, the RJC said King’s “record of inflammatory comments condoning white supremacists and anti-Semites is the antithesis of our goals and values as an organization” and asked members to raise money for his rival’s campaign.

On Monday afternoon, Benjamin Netanyahu announced his pick for Israel’s new ambassador to the United Nations and his pick for the next Israeli ambassador in Washington. And guess what? It’s the same guy.

Gilad Erdan, currently serving as Israel’s homeland security minister, will leave the cabinet to take on the double post. He will first step in as ambassador to the UN, replacing Dany Dannon who is returning to Israel, and then, after the U.S. elections, he will add another title to his portfolio: Ambassador to Washington, instead of Ron Dermer who’ll be heading home after 6 years.

It is a highly unusual move (though Abba Eban, Israel’s legendary diplomat did both jobs in the 1950s) but a necessary one to help Netanyahu with his new coalition. Netanyahu needed an attractive overseas post to convince Erdan to leave the cabinet and make room for others, and the double U.S. post was needed to seal the deal.

How will this work in practice? It’s too early to know. Perhaps Erdan will take a page from the coronavirus pandemic book and Zoom his DC meetings while he is sitting in the UN, and vice versa. Or maybe it is just a sign of the time: in the gig economy we’re all part of, one job is no longer enough.