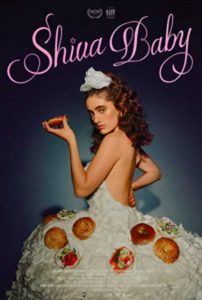 When Danielle’s overbearing mother presses her into attending a shiva, a series of disasters converge over the span of several hours. Shiva Baby, directed by Emma Seligman, is a taut, finely scripted comedy in which emotional tensions, hidden secrets and discomforting personal interactions tumble out so swiftly that the audience is on tenterhooks wondering where this car crash will end.

Danielle, played by Rachel Sennott (High Maintenance, Call Your Mother), is a bisexual woman who has just graduated with a degree in gender business studies, but she is aimless and unemployed. She has told her parents that she has what she euphemistically calls a part-time “babysitting” job that, in reality, involves getting paid for sex with a married man.

Her parents’ desire for her to accompany them to visit the bereaved is seemingly rooted in their hopes that she might make some useful professional contacts among the mourners. But all does not go according to plan.

Nosey questions abound about Danielle’s future employment plans and intrusive inquiries are made about her apparent weight loss.  But far worse is to come. Her ex-girlfriend Maya, played by Molly Gordon (Animal Kingdom, Life of the Party, Booksmart, Good Boys) is there with her insufferable mother, Katherine, played by Glynis Bell (Law and Order, Mercy, Gravity), who loses no time in boasting that her daughter has just been accepted to study law at Columbia University. 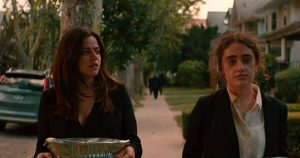 Then, horror of horrors, Danielle’s sugar daddy, Max, played by Danny Deferrari (Madoff, Three Christs, Blue Bloods) turns up. Max has been under the illusion that the money he has been handing Danielle after their sexual encounters was going into her fund for graduate school. But the tall tale she told him soon falls apart when her father blurts out that it’s proving difficult for her to find a job as “feminism isn’t exactly what I’d call a career.”

The crisis escalates dramatically when Max’s hitherto concealed wife, Kim, played by Dianna Agron (Glee, Heroes, It’s a Mall World) arrives with their baby. Danielle mislays her phone, containing incriminating photos and video footage, and the hunt is on to find it before it falls into the wrong hands. With this confection of fast accumulating disasters, a veritable black farce ensues.

Polly Draper (Stella’s Last Weekend, Thirtysomething) gives a captivating performance as Debbie, Danielle’s neurotic Jewish mother, delivering some of the sharpest one-liners. After Danielle accuses her mother of expecting her “to kiss the ground you walk on for not kicking me out of the house” upon discovering her previous relationship with Maya, Debbie shoots back acerbically: “You’re not in our house, you’re just on the payroll.” On being informed by Danielle that she is now a vegetarian, Debbie retorts: “You look like Gwyneth Paltrow on food stamps—and not in a good way!” And when husband Joel, played by Fred Melamed (A Serious Man, In A World, Lady Dynamite), spots the desserts arriving, Debbie instructs him, to no avail, to let others go first: “You go to the gym in the morning, you eat your way back to lunch!” 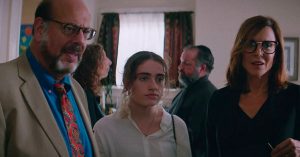 Filmed in Brooklyn, this is not a film for those of a particularly prudish or sensitive disposition. Not only is there some explicit language, but Danielle and Max enjoy a hasty, intimate encounter in an upstairs bathroom. Though the encounter is shot in a perfectly discreet manner, a few scenes later, with shiva attendees stuffing food into their mouths at the buffet, there are some crafty insinuations as to what just took place.

Sennott’s portrayal of a mixed-up, apprehensive, somewhat belligerent twentysomething is uncannily realistic. Often filmed in close-up, her facial expressions convey the intensity of her character’s acute embarrassment around her parents’ excruciating behavior, her still tender feelings toward Maya, her contempt for Max and the awkwardness of the situation she finds herself in. Just 25, we can expect to see much more from this talented actress and comedian.

This film is screening in select theaters and available to rent or buy on streaming platforms.

END_OF_DOCUMENT_TOKEN_TO_BE_REPLACED

One thought on “A Funeral Farce (Shiva Baby)”