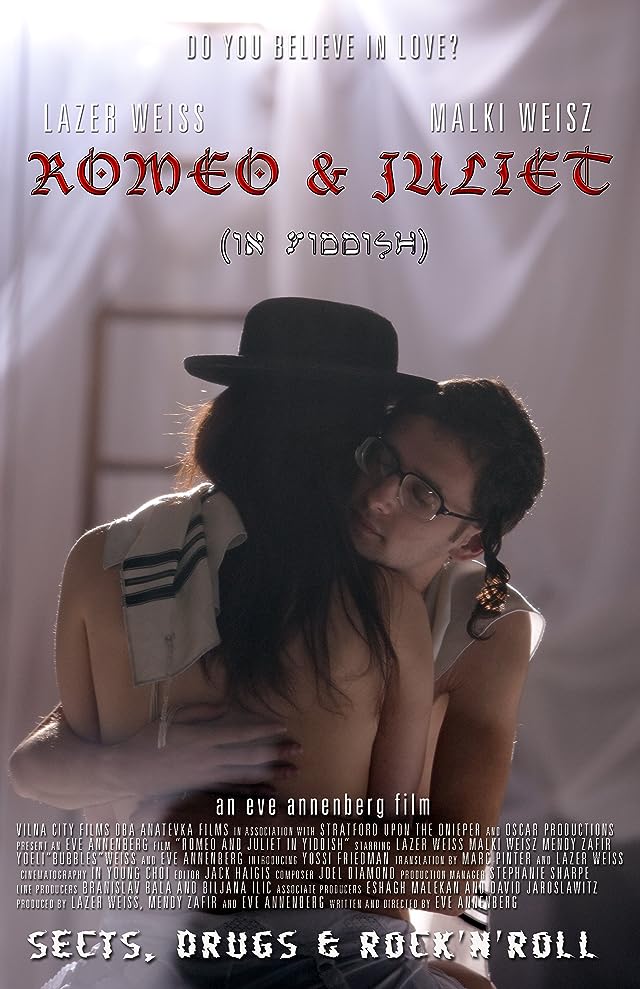 A group of young Hasidic men hang out at the foot of the subway stairs at a station in Brooklyn, New York.   Soon, another one joins them and the conversation quickly turns heated.  “Do you bite your thumb at us sir?/I do bite my thumb, sir./Do you bite your thumb at us, sir?/No sir, I do not bite my thumb at you sir, but I bite my thumb sir.”  These lines may seem familiar, as they open one of the most famous plays ever written: William Shakespeare’s Romeo and Juliet.  But would they seem as familiar in Yiddish?

That is a question tackled in “Romeo and Juliet in Yiddish,” a film by Eve Annenberg now playing as part of the 2011 New York Jewish Film Festival.  The movie does not simply transport the star-crossed lovers to the streets of Williamsburg.  Rather, it is a film within a film: The plot alternates between the contemporary lives of its protagonists, Lazer, Mendy, and Ava, and the lives of the fictional characters they play, Romeo, Benvolio, and the Nurse.   In an additional twist, the non-Shakespearean parts of the story are modeled on the real lives of the film’s central and first-time actors.

Much like in the movie, Annenberg, a part-time ER nurse and film director, conceived of the idea of making a film of Romeo and Juliet and recruited Hasidic young men and women who had recently left their communities to play the leads.  As the filming got underway, Annenberg realized that the Yiddish script she was using was outdated and turned to her young cast to help her reshape the material.  Over the course of this work, she learned their stories and wove them into the film, creating two parallel plots.

Of course this is not the first time that Romeo and Juliet has been performed in Yiddish.  In the heyday of Yiddish theater, Romeo and Juliet, like many of Shakespeare’s best known plays were translated and performed for audiences from Vilna to New York.  But this adaptation is particularly poignant given that, unlike earlier generations, all of the actors save Annenberg had no familiarity with the story—or even with Shakespeare himself—before speaking his words themselves.

Although their life experiences might have been better suited to some of Shakespeare’s less earnest characters—Lazer and Mendy both smuggled pot and committed credit card fraud after they left their Satmar community as teenagers—they are nonetheless convincing in their roles as the love-sick Romeo and Benvolio, his sympathetic cousin.   But despite these young actors’ abilities, it is their contemporary lives that steal center stage.

The exoticism of their situation and their youthful charisma makes for compelling viewing.   They are at turns brash and arrogant, conning airport police at the U.S. border with fake stories of lost luggage and then paying their defense lawyer with bad checks, and vulnerable children imploring their estranged parents to speak to them, if only over the phone.  Indeed, instead of performing a Shakespeare play, they are living one, complete with wrenching choices about family, power, and morality.

Unfortunately, the film falls short in its failure to delve into the deeper questions it raises: who are these boys?  What drove them away from their previous lives?  What do they see for themselves in their future?  The characters themselves leave the audience intrigued, but the lack of development or analysis is unsatisfying.  Similarly, the Romeo and Juliet narrative is also highly edited, offering little opportunity to become emotionally invested in the characters and  their ultimate fate.

The concept of bringing a work as famous as Shakespeare’s to a group of people previously untouched by his power is also not new, but nonetheless creates a fascinating opportunity to explore how his themes of passionate love and internecine hatred resonate for these young men.  Despite its flaws, Annenberg has created a movie that not only offers its audience a glimpse of an unexplored world, but also a fresh opportunity to celebrate Yiddish and its improbable second incarnation as the language of theater.  She is reportedly in talks for other film projects for her young protégés.  Perhaps in a year or so, we’ll all be hearing “To be or not to be” in Yiddish on the big screen.

END_OF_DOCUMENT_TOKEN_TO_BE_REPLACED

A new generation has taken up the banner and found creative ways to make Yiddish relevant, injecting the language into concerts, lectures, poetry, theater and podcasts.

END_OF_DOCUMENT_TOKEN_TO_BE_REPLACED

Narrated by Aaron, a wisecracking 500-year-old African Gray parrot with a penchant for Yiddish puns, the book follows Moishe, a 14-year-old who yearns for adventure after discovering his father’s book of maps.

END_OF_DOCUMENT_TOKEN_TO_BE_REPLACED

The Donald Trump victory is not only highly distressing to me as an American; it is troublesome because it portends to render peace in my beloved Israel more distant than ever.

END_OF_DOCUMENT_TOKEN_TO_BE_REPLACED

‘While I’m Here’: A Look Back at Theodore Bikel

Theodore Bikel was an actor, a folksinger, a Yiddish speaker, an activist. Now, a group of musicians is making its own attempt at preserving Bikel’s legacy.

END_OF_DOCUMENT_TOKEN_TO_BE_REPLACED

Facebook Twitter Pinterest linkedin Telegram
A Full-Bodied History by Hilary Weissman, with additional reporting by Sala Levin For a quick overview of the complexities of the w...

END_OF_DOCUMENT_TOKEN_TO_BE_REPLACED

A heartfelt letter sent to a newspaper editor a century ago has long stayed with me. I happened upon it decades after it was written. With his soul in torment, a New York factory owner had turned to the editor for advice. He was not paying his workers— like him, Jewish immigrants from Eastern Europe—nearly enough for them to make ends meet. He had a business to run, and there were limits to the wages he could afford. Still, the suffering of his employees and their families tore at his heart. What should he do?

END_OF_DOCUMENT_TOKEN_TO_BE_REPLACED

Beshert: Is destiny the best way to choose a mate?