It happened shortly after 8 on a summer Sunday morning. I was driving on a rural section of Interstate 75 in Northern Michigan on my way to Mackinac Island to officiate at a wedding. I had left home at 5 a.m. for the four-and-a-half-hour trip, allowing extra time so that I wouldn’t feel so rushed to make my 12:30 p.m. ferry reservation. The extra time was especially important as this was my first lengthy drive since recovering from a rather significant surgery six weeks before.

The drive started out perfectly. I was singing along with the radio, thinking about the d’var Torah I had written for the wedding when I suddenly heard a noise. It concerned me but I put it out of my mind quickly. Then, a few minutes later, the car started bumping fiercely so I pulled over to look. It wasn’t a flat tire. It was a blowout.

So, there I was. In the best of circumstances, I’m not a good tire changer. But, with strict orders from my surgeon not to lift anything heavy, there was no way in the world I could do it.

I reached for my cell phone. “No service”.

Worst-case scenarios came easily into my mind: missing the ferry, leaving the couple standing alone at the chuppah with no way to let people know why the rabbi didn’t show.

I have never felt so helpless as I stood on the side of the desolate road almost in tears.

A moment later, I looked up, and out of the morning fog, I saw that a car had pulled over. It was odd that I hadn’t heard the car coming.

The driver, a man who appeared to be in his 60s, got out and asked if he could help. I explained my situation and he said: “Okay.” He took out my spare and silently changed the tire in five minutes.

I offered to pay him. He refused.

I asked him for his name and address so I could thank him properly. He would not tell me his name, simply saying: “I’m glad I could help.”

He drove off into the fog as quickly as he had arrived.

I made it to the wedding with time to spare.

I have thought about him often.

Or perhaps an intercession from those who look down on us.

Quite frankly, that is the explanation I prefer. 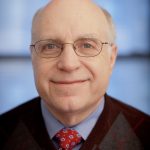 Rabbi Rob Dobrusin is Rabbi Emeritus of Beth Israel Congregation, Ann Arbor, Michigan where he served as rabbi for 30 years. He was ordained at the Jewish Theological Seminary of America in 1982. An animal lover, he volunteers at the Toledo Zoo and at the local Humane Society. He continues to teach, writes a blog on his website at robdobrusin.com and has a podcast: wrestlinganddreaming.podbean.com. Rabbi Dobrusin and his wife Ellen live in Ann Arbor and are the parents of two adult children.

Will the Pandemic Change Where We Choose to Live?

If you’re dreaming about a little house in the woods right now, you’re not crazy. You’re practical.

END_OF_DOCUMENT_TOKEN_TO_BE_REPLACED

Archives from the past..., Latest, Religion

Always a "Moment" Ahead of the Curve

Facebook Twitter Pinterest linkedin Telegram
One of the great things about Moment is that through its 36-year history, it has documented breaking trends in Jewish life with insight...

END_OF_DOCUMENT_TOKEN_TO_BE_REPLACED

Facebook Twitter Pinterest linkedin Telegram
By Symi Rom-Rymer While perusing the bookshelves at Barnes and Nobel yesterday, I came across a wonderful graphic novel entitled The R...

END_OF_DOCUMENT_TOKEN_TO_BE_REPLACED

Steve Urkel Stands Under the Chuppah in "Road to the Altar"

Facebook Twitter Pinterest linkedin Telegram
By Sarah Breger The fall TV season has started, but there is one summer show you should make sure to catch up on (and with four minu...

END_OF_DOCUMENT_TOKEN_TO_BE_REPLACED

Facebook Twitter Pinterest linkedin Telegram
by Sarah Breger So now Jews have jumped on the "dancing down the aisle" meme. In an homage to the overplayed, yet undeniably adorable,...