by Kara A. Kaufman 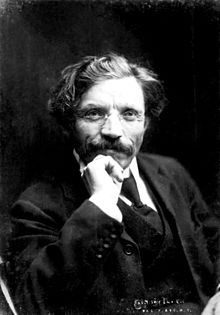 It’s not every day that you see your own photograph in a newspaper, much less a Russian publication printed halfway around the globe. But one afternoon when I was a young girl (age “six and two-thirds,” as I told the reporter), I found myself gazing into the grayscale eyes of my own face. The newspaper article centered around the Yiddish author Sholom Aleichem, perhaps best known for his “Tevye the Dairyman” stories which are the basis for the musical Fiddler on the Roof. The reporter had snapped my photograph because Sholom Aleichem is my great-great-grandfather. My family has hosted an annual yahrzeit in honor of his memory for 95 years; this Sunday will mark our 96th.

My family holds these yahrzeits out of our collective desire to remember my great-great-grandfather, and also to follow the wishes he laid out in his last will and testament. In it, Sholom Aleichem (born Solomon Rabinowitz) asks his descendants to remember him either by saying kaddish or by selecting one of his stories and reading it aloud. He directs us to “select one of my stories, one of the really merry ones, and read it aloud in whatever language they [his descendants] understand best.” Since 1916, when Sholom Aleichem passed away, my family has read some of these “really merry” stories aloud with family and friends in both Yiddish and English every year on the anniversary of his death. Perennial favorites include, among others, “Grandfather’s Story,” “On America,” and “On Account of a Hat.” Collectively, they remind us of the realities of small-town life in Eastern Europe as well as a wave of Jewish immigration to the United States early in the 20th century. They also invite us to laugh at our own foibles and the hurdles life can throw in our way.

Sholom Aleichem’s will also reveals his desire to write for the common person. He writes, “Wherever I die, let me be buried not among the rich and famous, but among plain Jewish people, the workers, the common folk.” His funeral attracted hundreds of thousands of spectators in New York City, and his will was printed in the New York Times so that thousands more could read his words. Hundreds of invited guests continue to attend our annual yahrzeits each year.

Throughout my life, I have had the pleasure of hearing about people’s unadulterated love for Sholom Aleichem. When I mention that I am a great-great-granddaughter, people’s mouths often fall open in surprise. “Really?” they ask. They tell me about their grandmother, grandfather, aunt, uncle, mother or father, who read Sholom Aleichem’s stories to them as young children. They don’t often dwell on particular characters or tales, but their eyes light up as they remember my great-great-grandfather’s humor and the feeling of connection to their Jewish heritage that he inspired. Once, I met a woman at synagogue on the day that she adopted a new Hebrew name. When she heard I was related to Sholom Aleichem, she nearly cried. Apparently, the relative whose Hebrew name she had just chosen for herself had also read Sholom Aleichem’s stories to her throughout her childhood.

In some ways, Sholom Aleichem’s legacy is a hard one to live up to. People I meet often ask if I enjoy writing (I do), if I have read all of his stories (I am in the process), and whether I speak Yiddish (I do not; interestingly, Sholom Aleichem spoke Russian, not Yiddish, in his own home). But, more than anything else, I feel pride. When I look at yellowed photographs of him with my great-aunt on his knee, I feel connected to a person who made a difference in the world not through grandiose gestures, but through writing about what he knew. Sometimes, when I write about my own experiences or struggles, I feel particularly close to him.

To me, my great-great-grandfather’s continued popularity rests on the fact that his characters and narrative voice touch our lives today. When we read his stories aloud, we feel a palpable familiarity. We listen with bemusement to the story of the man so mixed up that he arrives at three different towns in the wrong order—missing all of his appointed lectures in the process—because we have all been desperately lost at some point in our lives. We relate to Tevye’s desire to find suitable matches for his daughters because we are still concerned with relationships, family and status. Threading these narratives together is Sholom Aleichem’s own voice, at once sympathetic toward his characters and removed from them, enabling us, the readers, to laugh at life’s absurdity. These tales paint a picture of shtetl life to show us where we came from, while, in the process, making us increasingly aware of who we are.

A large number of yahrzeit attendees do not own computers. Many of them understand the stories in their original Yiddish. When, in several years, my brother and I inherit the honor of conducting these yahrzeits from our parents, we will likely send out invitations with a click of a button, rather than the lick of a stamp. One thing will remain the same: our collective joy at hearing these tales.

Facebook Twitter Pinterest linkedin Telegram
Twenty years ago, I fell in love with The Fiddler. You know who I mean, right? That ubiquitous guy on the roof? The memory of our fi...