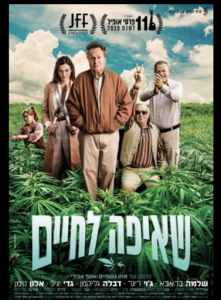 The plot revolves around Dov, who spent 50 years working for the postal service and discovered, following privatization and a dramatic increase in life expectancy, that his former employer’s pension fund is empty. His mortgaged house, where he lived happily for 56 years, has been sold without his consent and his semi-estranged daughter Hagar, a professor in Singapore (and winner of the Israel Prize for mathematics) and grandson Gidi have moved him into a retirement community. 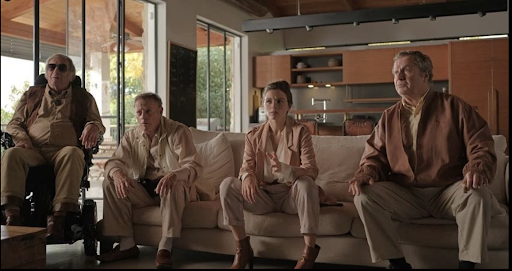 When we first meet Dov he is depressed, argumentative and constantly complaining that he wants to buy his house back “because only there will I be happy.” But it’s not long before he makes a startling discovery. While cannabis is illegal in Israel, the government-approved medical variety is widely available via prescription to all seniors over age 75, which explains why everyone in the nursing home complex is so chilled out. Two fellow residents, Avner (Gadi Yagil) and Varda (Nira Rabinovitch), attempt to lift Dov’s spirits by encouraging him to try marijuana—but to no avail. He contemptuously rejects their offer, saying he has no desire to be a “pothead.”

But then Dov is struck with a sudden idea: What if his fellow residents will agree to hand over their surplus supplies to him to sell on the black market where, thanks to zealous police work, demand far exceeds supply? It’s a madcap scheme, but Dov sees it as his salvation from the “prison” from which he is so anxious to escape. With the assistance of his grandson’s girlfriend Dana and her contacts, the weed business takes off! Unsurprisingly, there are some entertaining consequences. A dogged police chief, who had successfully cleaned up the clandestine cannabis trade, is in hot pursuit to uncover the culprits flooding the local streets with weed, while Dov and his little gang of newly minted criminals find themselves entangled in the crosshairs of a couple of rival, far-more-ruthless drug racketeers. 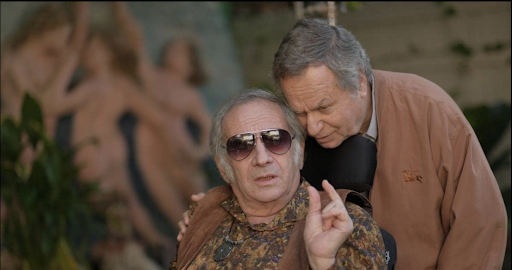 Far from depicting the elderly nursing home residents as doddery or pitiful, Greener Pastures portrays these seniors as joyful, determined and resourceful. Not only does Dov’s humor strikingly improve once he has embarked on his ambitious mission, but he also gains a fresher, more optimistic outlook when he discovers a new love interest in a most unlikely place.

The storyline shows that we do not necessarily need to accept the hand that fate deals us. Dov takes the trajectory of his future into his own hands, stubbornly rejecting the path laid out for him by others. In doing so he overcomes adversity, grabs life head-on in his sunset years and ultimately even finds what it means to be truly fulfilled and content. Other than the subject area of drug-taking, this is a gentle and amusing movie, wholly suitable for family viewing.

Check your local JCC film festival schedule, educational venues, synagogues and screening services for viewing dates and times. Due to the requirements of filmmakers and distributors, the virtual viewing of some movies is limited to certain geographical areas. Restrictions vary but it is worth checking each title on the internet. Most virtual films are only available for a few days.