People of the Book: Foreskin's Lament 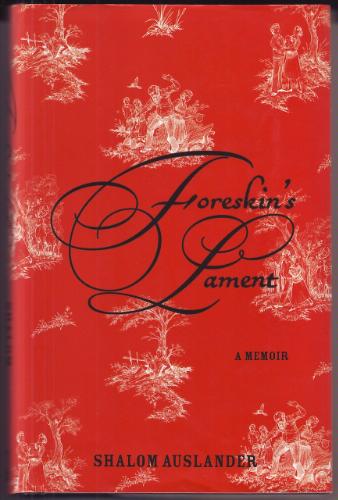 The month before Hanukkah is designated as Jewish Book Month; in honor of the occasion, IntheMoment is launching a new feature: People of the Book. Every week, staff writers will share a Jewish book that they love and tell us why the book speaks to them.  Of course, the world of Jewish literature is expansive and varied, and we hope that you, our readers, will share with us your own favorite Jewish books in the comments section–maybe one of your picks will be chosen for the spotlight.

The issue of favorite Jewish books inevitably raises an important question: Just what, exactly, is a “Jewish” book?  Is it any book written by a Jewish writer, regardless of subject matter?  A book whose main characters are Jewish, whether or not the writer is?  What about a book whose characters are identified as Jewish but never deal with their Jewishness in any meaningful way?  These are questions that we’ll deal with throughout the series.

However one may define “Jewish” literature, our first selected book invariably meets the criteria: Foreskin’s Lament, by Shalom Auslander.  From his writing and his occasional contributions to NPR’s This American Life, Auslander has become known first and foremost for his anger–and it’s all over the pages ofForeskin’s Lament, his 2007 memoir.  Auslander was raised in the Orthodox community of Monsey, New York, where, he writes,

Auslander is angry, all right: he’s angry about his dysfunctional family life (“I catch you in my room again,” his father tells him, “and I’ll break your goddamn arms”), and he’s angry about the vengeful, spiteful God that he has been taught to believe in (“I’ve been on God’s chessboard long enough to know that every move forward, every bit of good news–Success!  Marriage!  Child!–is just another Godly gambit, a feign, a fake, a setup; it seems as if I’m making my way across the board, but soon enough God calls check, and the company that hires me goes under, the wife dies, the baby chokes to death”).

Most of all, Auslander is angry that he can’t shake God off, that he can’t rid himself of the concept of God that he so despises.  God tails him, stalks him, lurks around every corner of Auslander’s world.  “I believe in God,” Auslander writes in what can be seen as the central tenet of the book.  “It’s been a real problem for me.”

But anger is a bitter pill to swallow, and Auslander wisely coats his anger with humor, albeit a vicious sort of humor.  “The stories I had been working on were about my life under the thumb of an abusive, belligerent god, a god who awoke millennia ago on the wrong side of the firmament and still hasn’t cheered up.  Working title: God Walks Beside Me with a .45 in My Ribs.”   There is no frivolity in Foreskin’s Lament: every youthful indiscretion, every adolescent crush, every family gathering is tinged with the expectation of wrongdoing, and the anticipation of a wrathful response.  Much like that abusive god, Auslander keeps the reader under his own thumb, unleashing an onslaught of aggression, a litany of the ways in which he has been wronged.  Luckily, he knows precisely how to balance fury with humor, so unlike the version of God he rails against.

You can read Shalom Auslander’s take on the writer Stanley Elkin in Moment‘s July/August 2010 “Speaking Volumes.”

END_OF_DOCUMENT_TOKEN_TO_BE_REPLACED

One thought on “People of the Book: Foreskin's Lament”