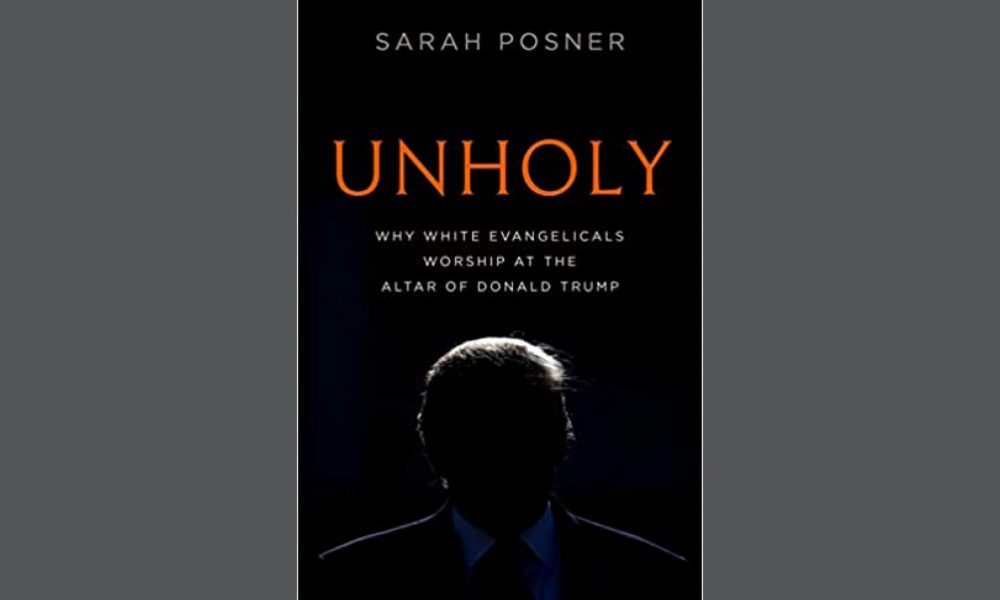 An opinion interview with Sarah Posner

What do President Donald Trump and the religious right see in each other? No journalist is better equipped to answer this question than Sarah Posner, who spent decades covering the rise of the Christian evangelical movement within the Republican Party (she even wrote an undergraduate thesis on the topic in 1986) and penned award-winning coverage of the alt-right during the 2016 presidential campaign. Watching evangelicals become improbably entranced with Trump as the campaign progressed, she had an “aha moment,” she writes in her new book, Unholy: Why White Evangelicals Worship at the Altar of Donald Trump. Trump’s divergence from the pattern of previous favored candidates, his appeals to racism and nativism, all faded before the anointing of “the strongman the Christian right had long been waiting for.”

Trump doesn’t sound like a traditional president, but when you think of him as a televangelist, it starts to make more sense.

Many consider the alliance a cold-blooded marriage of convenience. But the “purely transactional explanation for the Trump-evangelical merger,” Posner writes, fails to account for “the deeper bond between Trump and his devoted flock. Although Trump is illiterate in evangelicals’ lexicon and spent his adult life flagrantly contravening their sexual mores, his evangelical supporters are nonetheless starstruck.”

To understand why, Posner argues, you have to delve further—into the religious right’s resentment of, and recoil from, what conventional wisdom deems a half-century of progress toward greater inclusion and expanded rights, and into the long-standing grievances to which Trump gives voice so fluently.

What is it about Trump that entrances the Christian right?

For one thing, they’re entranced by power. But also, to charismatic and Pentecostal Christians who watch a lot of televangelists, Trump acts in a very familiar way. Televangelists get up on the stage and tell a long, meandering story about themselves, with faith healing and miracles and seemingly random anecdotes. It’s a central idea in that culture that you can speak something into existence—it’s true because they say it is. Trump doesn’t sound like a traditional president, but when you think of him as a televangelist, it starts to make more sense. He talks about himself, and about some great thing he did, and he rambles on and on, and that’s a very familiar style to a lot of people. They don’t find it strange the way the media does.

I was surprised not only that white evangelicals were embracing Trump, but that they were doing so at the same time as the alt-right. In some ways, it makes sense; a lot of the mobilization of the Christian right was originally driven by racial grievance. But on the other hand, they’d been sensitized to that as an image problem after 2012 and were openly trying to make their movement less white. So it was surprising that they’d turn away from that. When I interviewed Steve Bannon in 2016 at the Republican National Convention, before he became Trump’s campaign manager, Bannon told me, “Look, the alt-right and the Christian right need each other. We can’t win an election without both.” At the outset, many evangelicals liked Ted Cruz or Scott Walker. But they came together with Breitbart and Bannon and Stephen Miller and were willing to look past what they were doing. They might not have planned it, but they’re OK with it.

What role does anti-Semitism play?

That’s one of the most mystifying things about this. The Christian right loves to talk about its love for Israel and the Jewish people.

And the alt-right is overtly anti-Semitic, and some of them are outright Nazis. At one point in 2016, I’d been at AIPAC and at a Nazi rally, and at both places there were people supporting Trump. I think the Christian right is just willing to pretend this element is not part of Trump’s coalition. Each side has policies it wants enacted, and each side is getting some of what it wants. The Christian right is clearly more powerful, with a well-funded infrastructure, and the alt-right is a lot more ragtag. So the philo-Zionism of the Christian right is the predominant view in Trump’s orbit. But we’ve all seen the rise of anti-Semitism, not only around the world but also in the United States. Trump doesn’t have the language or the willingness to forthrightly condemn it, and it demonstrates the limits of the Christian right’s supposed love of Jews and Israel.

Could the alt-right become more uncontrollable because of the pandemic?

It could. You have these gun-toting protesters who are a small number relative to the population but who can cause a lot of harm and damage. So you have militias storming state capitols, and the Christian right suing governors over the stay-at-home orders, and it all mingles together in the idea that the stay-at-home orders violate our freedom. That’s how Trump has held this coalition together all along, with the idea that political correctness or liberalism has kept us down.