You can still find plenty of children’s and young-adult books focused on the Holocaust and holidays; those topics matter, and they won’t fade away anytime soon. But the knowledge, artistry, warmth and diversity to be seen throughout the Jewish kidlit community is one of the most encouraging Jewishly oriented developments in publishing. Consider this sampling of picture books published in the past 18 months, and you’ll see what I mean. 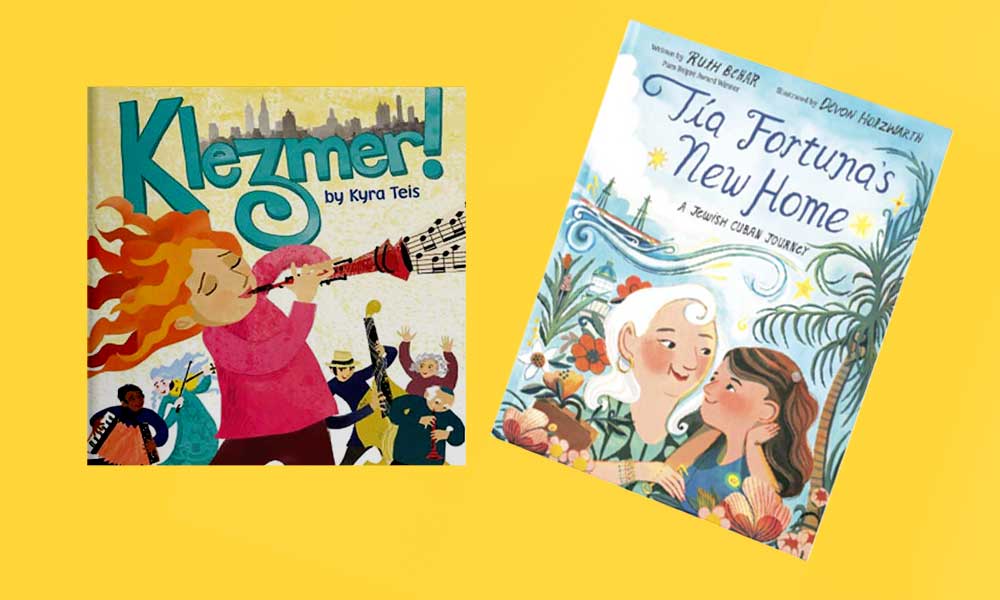 One standout example is Tía Fortuna’s New Home: A Jewish Cuban Journey (Knopf Books for Young Readers, recommended ages 4-8). This new book by the acclaimed anthropologist and author Ruth Behar, with illustrations by Devon Holzwarth, exemplifies the long overdue but happily increasing attention to Sephardic characters and stories. Adult readers may tear up at some of the story’s more poignant elements: In Miami, young Estrella’s elderly aunt, a long-settled emigrant from Havana, is now relocating from “her little pink casita at the Seaway” to “La Casa de los Viejitos” [senior citizens’ home], a move hastened by the fact that “bulldozers are coming” and “a fancy hotel will be built” where the casita has stood. But the book brims over with beauty, vitality and resilience. “We come from people who found hope wherever they went,” Tía tells Estrella on one of the book’s gorgeously illustrated pages, and the message sticks.

A similar spirit pervades Klezmer! (Kar-Ben Publishing, ages 4-8), written and illustrated by Kyra Teis. (In kidlit-speak, a person who both writes and illustrates a volume is called an “author-illustrator”; I call such a person supremely gifted.)

Visiting her grandparents on the Lower East Side of New York, our red-headed child protagonist enjoys learning about klezmer music: “oldish, and newish/like jazz, but it’s Jewish….

It can be tricky to convey music on the page, but a QR code takes readers to a video clip of a brief performance for all to enjoy. 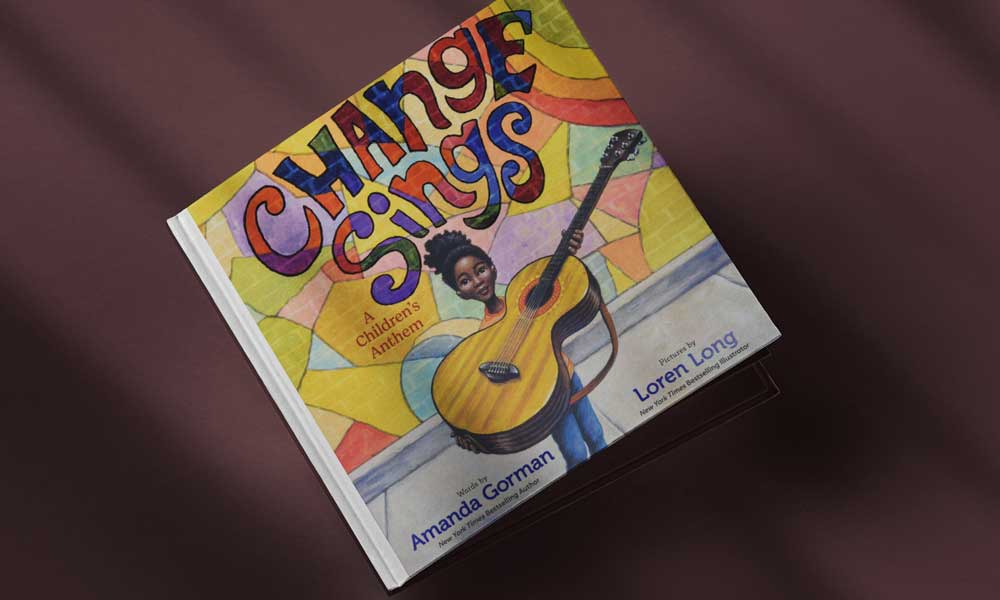 Although not an explicitly Jewish book, Change Sings: A Children’s Anthem (Viking Books for Young Readers, ages 4-8) merits a mention here. With text by Amanda Gorman (you may remember the former National Youth Poet Laureate from her role in President Joseph R. Biden’s inauguration—before which she publicly acknowledged her Jewish mentor Dinah Berland), this book’s illustrations by Loren Long notably feature a young child wearing a kippah.

This character pops up early in the book and appears throughout the multicultural pages that follow. It’s worth observing that illustrations in explicitly Jewish stories—including both Tía Fortuna’s New Home and Klezmer!—are reflecting increasingly diverse populations as well. 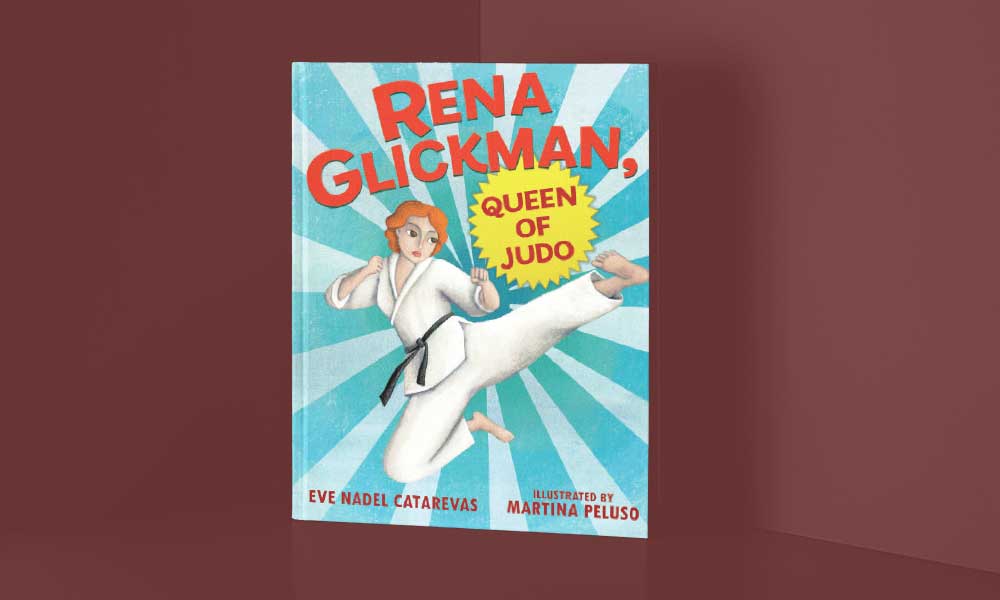 Especially if you have a budding judoka on your hands, you’ll appreciate Rena Glickman, Queen of Judo
(Kar-Ben Publishing, ages 5-9). Written by Eve Nadel Catarevas with illustrations by Martina Peluso, this book offers a kid-sized introduction to Glickman (1935-2009). Known professionally as Rusty Kanokogi, Glickman was born in Coney Island and was the first woman to become a seventh-level black belt in judo as well as coach of the first United States Olympic Women’s Judo Team. 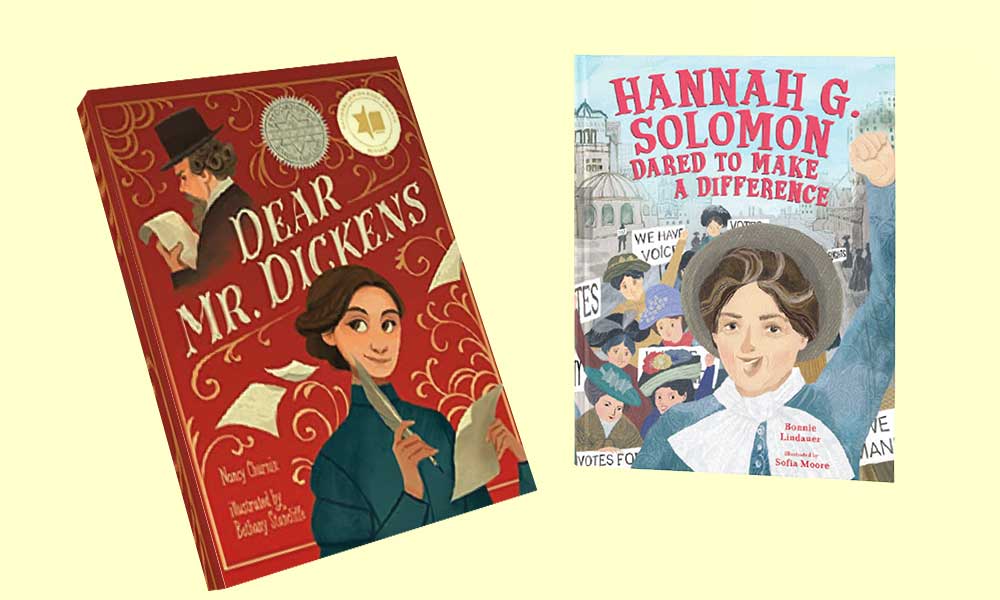 Other titles focus on founders of prominent Jewish organizations. Hannah G. Solomon Dared to Make a Difference (Kar-Ben Publishing, ages 5-10), by Bonnie Lindauer with illustrations by Sofia Moore, follows the founder of the National Council of Jewish Women (NCJW). Born in Chicago, Hannah Solomon (1858-1942) lived through a number of historical events that are woven into the book: the Civil War, the Great Chicago Fire of 1871, the Chicago World’s Fair of 1893 (which was key to NCJW’s establishment) and the passage of the 19th Amendment that granted women the right to vote. 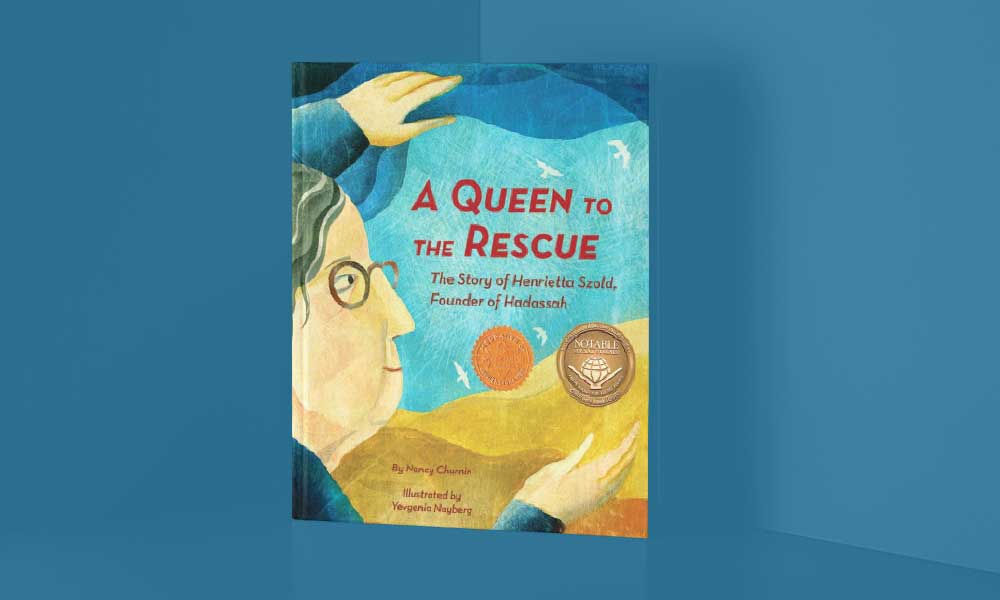 A Queen to the Rescue: The Story of Henrietta Szold, Founder of Hadassah (Creston Books, ages 5-11), by Nancy Churnin with illustrations by Yevgenia Nayberg, begins with the birth of Szold (1860-1945) in Baltimore. The book covers Szold’s achievements even before and beyond the Hadassah era (who knew that Szold was the Jewish Publication Society’s first editor?) and concludes with her later years in what was then called British Mandatory Palestine. In keeping with the title’s “rescue” focus, the book highlights the Youth Aliyah endeavor through which Szold and Hadassah saved 11,000 children from the Nazis.

Sigal Samuel’s Osnat and Her Dove: The True Story of the World’s First Female Rabbi (Levine Querido,
ages 4-8), beautifully illustrated by Vali Mintzi, takes place long ago and far away: Osnat Barzani was born in 1590 in Mosul, now part of Iraq, where her father, Rabbi Samuel Barzani, led a yeshiva. Atypically, Samuel Barzani provided his daughter with an education in Hebrew, Torah, Talmud, midrash and Kabbalah, equipping her to pursue positions of leadership not conventionally occupied by women. This book received a Canadian Jewish Literary Award (author Samuel hails from Montreal). 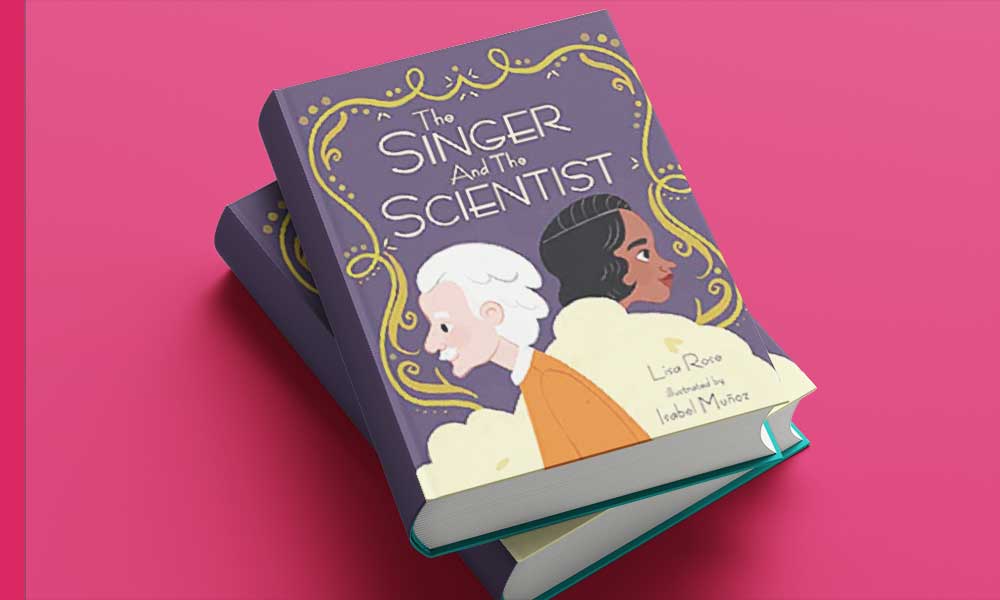 And Dear Mr. Dickens (Albert Whitman & Company, ages 6-9), written by Nancy Churnin and illustrated by Bethany Stancliffe, won the 2021 National Jewish Book Award in the children’s picture-book category. While not quite a biography, it is nonetheless anchored in a true episode from Victorian England, recounting Jewish reader Eliza Davis’s polite, persistent efforts to point out to famous author Charles Dickens the toxic antisemitic tropes embedded in his celebrated Oliver Twist. Davis’s ultimate success—not to mention her sustained good rapport with Dickens—models both civil, effective advocacy and Jewish pride.

Art and architecture play prominent roles in two other recent picture-book biographies—just as they did in the lives of their subjects. The People’s Painter: How Ben Shahn Fought for Justice with Art (Harry N. Abrams, ages 4-8), by Cynthia Levinson with illustrations by Evan Turk, won the latest Robert F. Sibert Informational Book Medal from the American Library Association. Born in Lithuania, Ben Shahn (1898-1969) immigrated to the United States as a child; in his adopted country, he became famous for his art and his activism, which were often one and the same. In its own vivid and colorful pages, Frank, Who Liked to Build: The Architecture of Frank Gehry (Kar-Ben Publishing, ages 4-9), written by Deborah Blumenthal with illustrations by Maria Brzozowska, focuses on the professional accomplishments—with some attention to the Jewish influences—of the famed architect.

Readers learn that longtime California resident Gehry was born Frank Goldberg in 1929; “Jews faced prejudice in Canada, where he grew up, and in Los Angeles, where he went to architecture school,” prompting him, unhappily, to change his surname to something less identifiably Jewish.

Bonds forged in the United States between Jews and non-Jews—particularly non-Jewish Black
Americans—underlie two more titles. The Singer and the Scientist (Kar-Ben Publishing, ages 5-10), by Lisa Rose with illustrations by Isabel Muñoz, spotlights the friendship between Marian Anderson (1897-1993), the pathbreaking Black opera singer, and Albert Einstein (1879-1955), the celebrated Jewish physicist who found refuge from Nazi Germany in the United States. In 1937, Anderson was denied hotel accommodations after a performance in Princeton, New Jersey, so Einstein hosted her in his home. The book is grounded in this origin story, and it offers a moving portrait of the friendship between these famous figures, who both faced different kinds of prejudice. And The Rabbi and the Reverend: Joachim Prinz, Martin Luther King Jr., and Their Fight Against Silence (Kar-Ben Publishing, ages 4-10), by Audrey Ades with illustrations by Chiara Fedele, introduces both Joachim Prinz (1902-1988)—who, like Einstein, was born in Germany and came to the United States in the 1930s—and the iconic Martin Luther King Jr. (1929-1968). It leads up to their appearance together on the National Mall in Washington, DC on August 28, 1963. 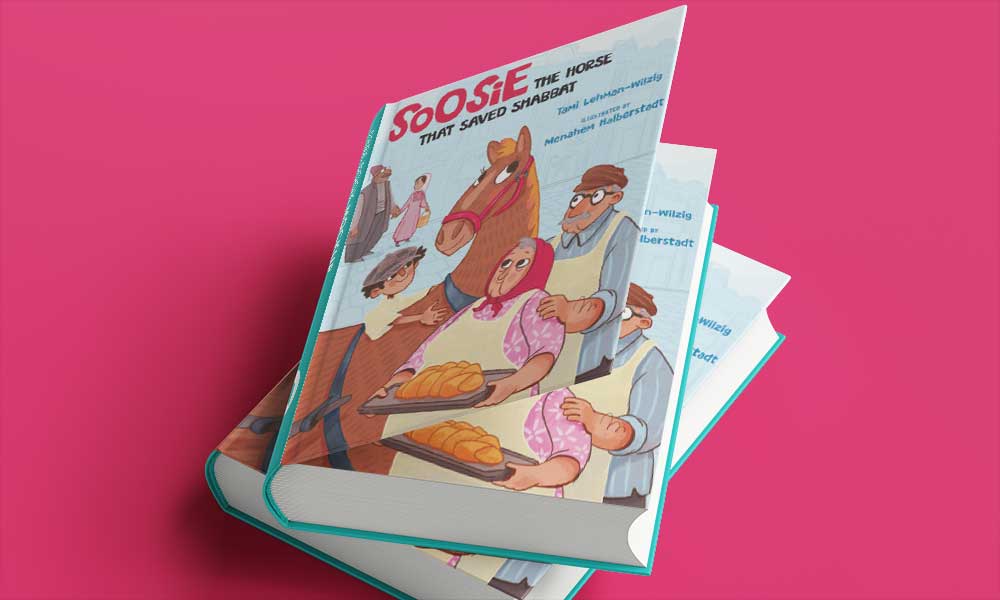 Israel: Past and Present

As it should in 2022, when the plurality of the world’s Jewish population lives in Israel, current Jewish kidlit recognizes Israel’s place in the collective Jewish past and present.

Remember when the Israelites journeyed from slavery in Egypt toward the Promised Land? It was a long, difficult journey through the desert. But for the young travelers in The Desert Unicorn (Apples & Honey Press, ages 5-8), by Bonnie Grubman and Kerry Olitzsky with illustrations by Amberín Huq, matters improve dramatically thanks to a magical unicorn modeled on the mysterious biblical creature known as the tachash. 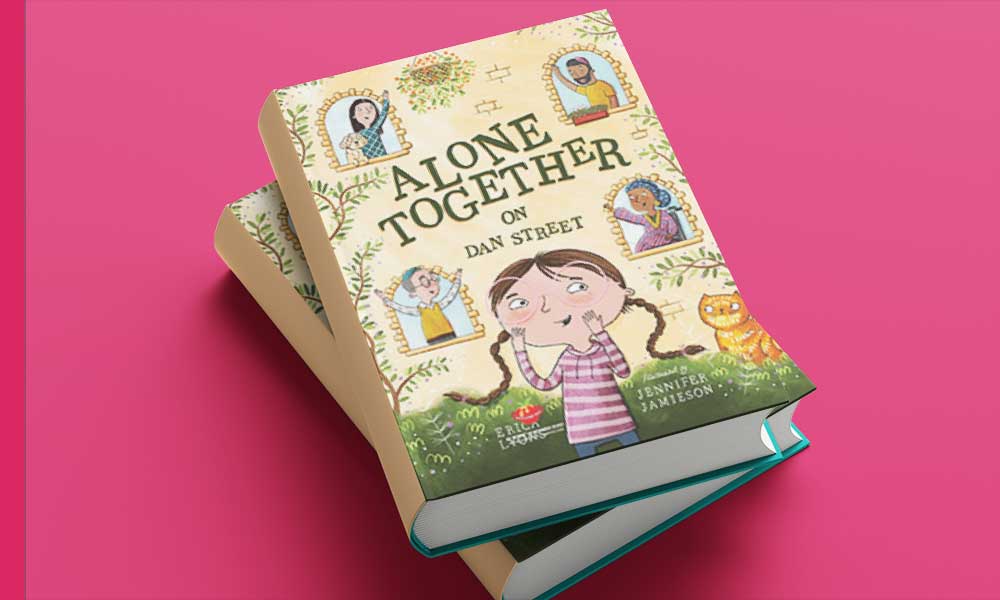 Flash forward to early-20th-century Jerusalem with the delightful Soosie: The Horse that Saved Shabbat (Kalaniot Books, ages 4-8), written by Tami Lehman-Wilzig and illustrated by Menahem Halberstadt. An author’s note situates the tale’s roots in a prominent Israeli bakery chain whose first shop opened in 1927. According to the founder’s grandson, his grandfather’s delivery boy once fell ill; it was left to the horse who pulled the bread cart to complete the rounds. This anecdote inspired the story of the savvy Soosie, who similarly saves a special day—Shabbat—by delivering fresh challah loaves on her own when her usual human driver is indisposed.

Also set in Jerusalem, Alone Together on Dan Street (Apples & Honey Press, ages 4-7), written by Erica Lyons with illustrations by Jen Jamieson, brings us much closer to the present. “It was the year the singing stopped,” the book begins. “To stay safe from a bad virus, everyone stayed home.” Also based on actual events, this story of how young Mira and her neighbors on Dan Street manage to stick together during the early months of the coronavirus pandemic—especially on the Passover holiday (see, I told you the holidays weren’t going to fade away!)—again provides us with a tale of resilient Jewish joy.

There is much, indeed, to celebrate.

END_OF_DOCUMENT_TOKEN_TO_BE_REPLACED

I lived three blocks from Zabar’s for 50 years.

END_OF_DOCUMENT_TOKEN_TO_BE_REPLACED

One thought on “New Jewish Kidlit: Beyond the Holocaust and Holidays”