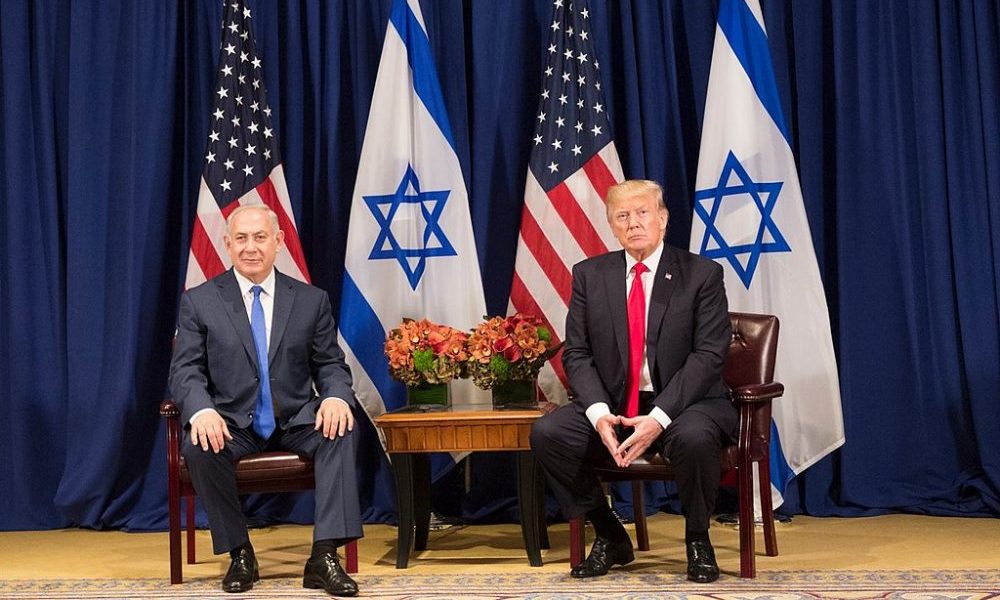 Five things to know this week from the nation’s capital.

Sign up here to get DC Dispatch delivered to your inbox every Monday.

1. Who wore it better, Trump or Netanayhu? Election fraud edition

With Israeli elections just a week away and with polls showing a tight race, Israel’s Benjamin Netanyahu is starting to behave more and more like America’s Donald Trump.

The similarities are uncanny.

Some parallel characteristics have been known for years, such as Trump and Netanyahu’s knack for using sharpies as the ultimate PR weapon. Bibi likes to use his for convincing the United Nations that Iran is on its way to a Looney Toons-style atomic bomb while Trump prefers to reserve his black sharpie for changing the course of a looming hurricane.

Netanyahu’s recent actions, now that elections are around the corner, have been a clear demonstration that the Israeli leader has been carefully watching and listening to Trump and is ready to implement those tactics in his own campaign.

For example, this last week brought about the claim of election fraud.

For Trump, it is a trope that dates back to the 2016 elections, when he repeated the. false claim that some 3 million votes were cast illegally, mainly by undocumented immigrants. He even set up a commission, which he later disbanded, to investigate the alleged fraud. Trump has also supported state-level toughening of voter ID requirements to prevent attempts to defraud the voting system. The targets of Trump’s voting fraud claims were, in most cases, immigrant and minority communities that tend to vote for Democratic candidates.

Netanyahu, on the other hand, only picked up on the issue recently. In fact, until a couple of months ago, no one even knew that he was so concerned about voter fraud. But now, it’s his hill to die on. Despite warnings from his own Attorney General and from the Supreme Court judge heading Israel’s election commission, Netanyahu and the Likud Party are working to ram through the Knesset a last-minute bill that will allow political observers to bring video cameras to document voters at polling stations. The reason? Bibi’s claim that someone is trying to “steal the elections from us.” And who exactly is trying to steal the elections? Arab voters.

And just as in the U.S., there is no evidence found for anti-Likud voting fraud.

2. Trump or Bibi: Attacking the media

Then there’s the media. Attacking the press for negative coverage is nothing new and was not invented by either Trump or Netanayhu. But both have taken these attacks to a new level.

Trump spends hours a day following TV shows and newspaper articles, then using his Twitter megaphone to comment on them and the people behind them. Just this weekend it was The New York Times’ Peter Baker and The Washington Post’s Ashley Parker and Philip Rucker that were at the center of his attacks. But more importantly, he has repeatedly accused the media of being the  “enemy of the people” and has refused to walk this accusation back.

And Netanayhu? He’s also never been a big fan of the press, and his rants against Israeli media, which he believes is skewed to the left, date back to his first term as prime minister in 1996. But now, perhaps inspired by Trump, or driven by his frustration over his party’s inability to break the tie, Netanyahu is going full-force after the Israeli press.

Borrowing Trumps’ favorite term, Netanyahu frequently accuses his critics of being “fake news” and even awarded the “fake news of the week” title to reporters chronicling his corruption investigations in a live Facebook broadcast. Netanyahu was also recorded lashing out at a former cabinet member for not taking action aimed at benefiting a pro-Netanyahu TV network.

Call it coincidence or call it luck, but somehow both Netanyahu and Trump happen to have sons who manage to outdo their fathers when it comes to attacking political rivals and the media.

At the same time in Jerusalem, Netanayhu’s oldest son Yair, who has already gained a reputation for using social media to attack rivals, including his tweets criticizing George Soros, kicked it up a notch last week. The young Netanyahu came under fire after tweeting about the late prime minister Yitzhak Rabin. Yair Netanyahu accused Rabin, who was assassinated by a right-wing extremist in 1995, of “murdering Holocaust survivors” and causing “the death of 2,000 Israelis” during the Second iIntifada. Prime Minister Netanyahu later issued a statement clarifying that he does not agree with his son’s tweet and that “Yair’s positions are his alone.”

4. Was Netanyahu inspired by Trump?

Using voter fraud claims to suppress voters in the rival camp, and accusations of biased media in every case of unflattering news coverage, are not new and were not invented by Donald Trump. Nor were they unfamiliar to Netanyahu, who has been active in politics for nearly four decades.

But Trump’s extreme usage of these tactics, his willingness to double down on false claims of voter fraud and his disregard to the role played by the media in a democratic society, have definitely resonated all around the world, including in Israel. The lesson world leaders—including, but not limited to, Netanyahu—have learned after three years of Trump is that there is no such thing as too much. That the fear of paying a political price for crossing the line, for being too aggressive, too outrageous, too detached from facts, isn’t high at all. In fact, using Trump tactics in excess only helps rally the base, and does little to deter swing voters.

5. Troubling question for the post-election Bibi

By the time Netanyahu forms his next government, assuming he wins the September 17 elections, Donald Trump would have already opened talks with North Korean dictator Kim Jung Un, invited leaders of the Taliban to Camp David, expressed his willingness to meet with Iran’s president Hassan Rouhani, and spoken time and again about his wish to meet with his rivals from Russia and China. Does this sound like a president who will accept Netanyahu’s refusal to sit down with leaders of the Palestinian Authority or of Hamas once the “deal of the century” is presented?