For my bat mitzvah in 1981—I was the first girl in our family to have one, according to my Great-Great-Uncle Louis— my grandparents presented me with a gold Magen David, which I proudly wore with my new Gunne Sax dress. My family surrounded me on the bima, and I felt beautiful and powerful and loved.

I wore my necklace almost constantly for years, buying new chains when old ones broke, and thought of my grandparents, Harry and Ruth Prolman, each time I rubbed my fingers across the star’s face. I wore it to each of their funerals and cupped my hand around it while saying Kaddish.

I wore it again while preparing for my son’s bar mitzvah, which, in a painful twist of timing, was scheduled for the day after my and his father’s divorce would be final. It was not a divorce I wanted, and I was broken inside. I had looked forward to this day for years but now wasn’t sure I could keep my composure standing on the bima with this man who no longer loved me.

Despite knowing my family would be there to support me, I felt neither powerful nor beautiful nor loved.

As I racked my brain trying to come up with a meaningful gift for my child that would not wreck my finances, my hands once again found the star around my neck, and it was decided. I would give my son his own Magen David.

We spent weeks looking in jewelry stores to no avail. There simply isn’t a large enough Jewish population where we live for stores to have more than two or three Jewish necklaces, and the largest synagogue in the area with a Judaica shop is a forty-five-minute drive away that was only open when I was at work and he was in school.  So, we did what any modern-day shopper of hard-to-find items does and looked on the internet. 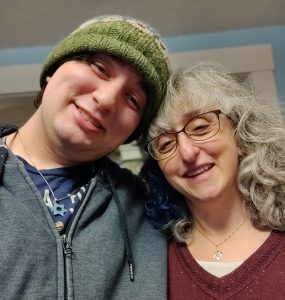 The star my son chose was lovely —opals set in silver—and perfectly fit his personality. The morning of his bar mitzvah, we each put on our stars. Mine yellow gold, his multi-colored and flashing in the light. From the corner of my eye, I saw him reach up and rub his fingers over the surface, just as I do when I am thinking or in need of comfort. My heart swelled with love and pride.

And in that moment, I felt powerful and beshert.

Lisa Prolman is a librarian who lives in Western Massachusetts with her fiance, son, dog, and three cats. When she is not answering reference questions, wrangling recalcitrant computers, or singing with her synagogue’s musical group, she writes an occasional blog, Snippets of an Unanticipated Life, here.

Top photo: At the Torah on the Bar Mitzvah Day: Mother and son on March 14, 2014, Beit Ahavah, The Reform Synagogue of Greater Northampton, Florence, Massachusetts.