I hope devoutly that your September-October online issue really is a one-off, sparked by a temporary paper shortage. The stories are as strong as ever. The format is difficult, as evidenced by it being mid-October and me being only mid-issue—really, only a quarter of the way in—where normally I would have devoured Moment the moment it arrived.

I know I can read at least some of the same stories online, and perhaps I’ll seek out the rest of them on your website, where I won’t have to toggle around virtual pages, blowing up the print and working hard just to see everything. But this is not the experience I crave. I want to hold Moment in my hands and turn real pages, enjoying the experience as well as the writing.

As a former newspaper editor, I understand all too well the challenges print publications are facing. I hope you understand the love your readers have for your magazine—as a magazine.
Alan Rosenberg
Warwick, R.I.

Editor’s note: Don’t worry. Like every magazine across the country, we have encountered serious paper shortages and postal delays in publishing. To ensure our readers received the September/October issue ahead of the High Holidays, we made the decision to forego print and make the issue available for download. However, this was a one-time occurrence, and we will be in print for the foreseeable future.

WHAT WOULD ADELAIDE DO?

Thank you for this “Big Question!” It made me think of my own role models.For many years I would half-jokingly say, “When I grow up, I want to be Adelaide Zagoren.” She was certainly an influence and a role model. Adelaide was college educated (Douglass College ’40) as were her four sisters at a time when many women weren’t. She was a professional, serving as the executive director of the Associate Alumnae of Douglass College (also my alma mater, ’67). She was a dynamic leader, a creator of innovative programs, an outstanding fundraiser and a tireless advocate for women and women’s education. In addition to her professional work, she was a prominent figure in community organizations, including the Girl Scouts, the United Way and numerous Jewish causes.

For 19 years she served as the president of the Blanche and Irving Laurie Foundation, which provides support for the arts, education, human needs and Jewish causes. In that role she mentored and encouraged my development as a philanthropist when I established my own family foundation in 1996. Then she recruited me to the board of the George Street Playhouse. Adelaide was intelligent, energetic and an active participant on the boards of cultural organizations well into her 90s. She was absolutely awesome and although she passed away in 2014, there are times I still ask myself, “What would Adelaide do?”
Sharon Karmazin
Milltown, NJ

In the article “The Next Generation of Jewish Farmers,” (Summer 2022) you might have mentioned the National Farm School in Doylestown, Bucks County, Pennsylvania (now Delaware Valley University). It was established in 1896 to train young Jewish boys in practical and scientific agriculture, some of whom were expected to move to Palestine. My father went there because of low tuition and graduated with a four-year college degree in 1933. He neither became a farmer nor emigrated to Palestine, but his grandson and his family made aliyah last year. L’dor v’dor.
Stewart Merkin
Miami, FL 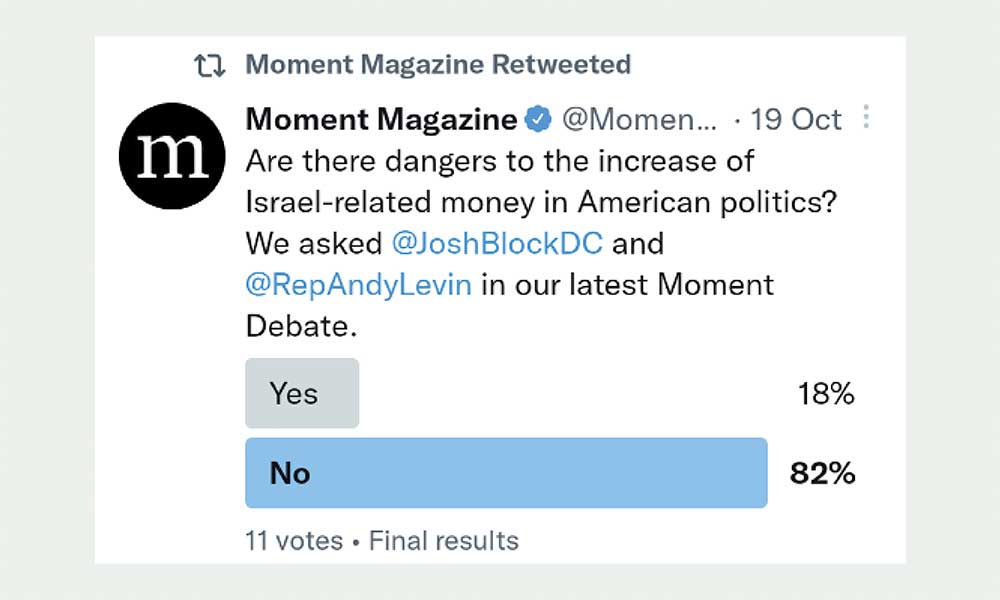 In the previous issue, Moment asked if there are dangers in the increase of Israel-related money in American politics. We asked Moment’s Twitter followers to weigh in.
The majority answered no.

One thought on “The Conversation”